The Return of Geopolitics 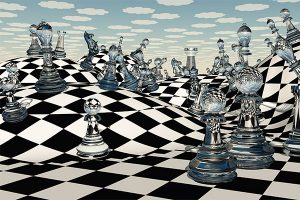 Geopolitics is back on the political agenda. Politicians around the world are once again defining international relations in terms of national interests and spheres of influence. It hardly needed the Corona crisis, and the ensuing economic uncertainty, to remind us how fragile and fractured the contemporary political order is. The new geopolitical landscape is complex and open as it remains unclear which choices countries will make and what resources they will use towards these newly defined ends.

Our focus this week brings you some of the important lectures and debates held at the IWM on this new world (dis)order in recent years, which could function as an intellectual compass for the new world of geopolitical imaginations and claims, their possibilities and limitations. [Read more] 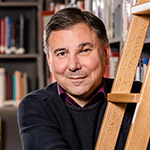 Since 2018, the event series “Geopolitical Talks”, initiated by IWM Permanent Fellow Ivan Krastev in cooperation with the Austrian Ministry of Defense, has brought leading foreign policy experts and former politicians to the IWM to discuss the return of geopolitics, the political and economic ambitions of new global players as well as security risks and general threats to democracy. Among the distinguished guests were Robert John Sawers, former chief of the British Secret Intelligence Service MI6  [Changing Politics and Geopolitics], the former national security advisor to the Prime Minister of India Shivshankar Menon [The New Asian Geopolitics], American policy analyst and government official Wess Mitchell as well as William Joseph Burns, former career Foreign Service Officer and President of the Carnegie Endowment for International Peace [American Diplomacy in a Disordered World].

In April 2016, the IWM had the honor of welcoming former US Secretary of State Madeleine Albright. Together with Gerald Knaus (ESI), later a Europe’s Futures Fellow at the IWM, and Christian Ultsch (Die Presse), she participated in a Political Salon that addressed Global Responsibility in dealing with the refugee question – a topic that has not lost in importance in view of the currently dramatic situation in Greek refugee camps.

“The question is not whether geopolitics is escapable or bad, but how the inevitable interstate frictions can be harnessed to push the major powers security and prosperity”, stated Stephen Kotkin, Professor of History and International Affairs at Princeton University, in his IWM Lectures in Human Sciences on “Sphere of Influence“  in 2017 . His three talks are among the most viewed videos on our YouTube-channel.

How much the geopolitical landscape has changed in recent years becomes clear when reading Robert Cooper‘s assessment from 2013. In his article published in IWMpost 111, the former high-ranking British diplomat and European Commission official writes: “In contrast to the world at the beginning of the last century, the geopolitical environment in Europe today is benign. The Middle East and the Mediterranean are disturbed, but no worse than usual; the Cold War is over and Russia is preoccupied with making money, a peaceful activity; even the Balkans makes halting progress. No one is thinking of war.” Read the online version or download the original article as PDF.

Building on her longstanding and groundbreaking research on the “New Wars”, Mary Kaldor, Professor of Global Governance at the London School of Economics, explained in her lecture “New Wars as a Social Condition“ at the IWM in May 2017 that the difference between old and new wars is not empirical but conceptual. Whereas old wars (both inter-state wars and classic civil wars) can be analyzed in Clausewitzean terms as a contest of wills, new wars are more like a social condition.

“The main theme of European history in the 20th Century is the transition from empire to integration. Ukraine is the country whose experiences bring together European and global themes that allow us to see this process”, said IWM Permanent Fellow and Professor of History at Yale University Ukraine Timothy Snyder in his keynote speech “Ukrainian History as World History: 1917-2017” on October 13, 2017, which opened the conference “Revolutionary Ukraine: A Reflection on 1917 and Its Aftermath” at the IWM. 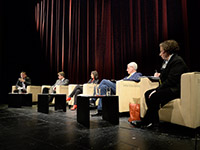 After the fall of the Iron Curtain in 1989 and the subsequent reordering of Europe, it seemed that a new era of stable and peaceful development lay ahead. In recent years, however, Europeans have experienced increasing insecurity. Peace and security can no longer be taken for granted. Borders and national entities have been called into question. Has the Cold War returned to Europe? What geopolitical changes might we expect in the near future? These questions were addressed by the panelists of the Debating Europe matinée “The Return of Geopolitics” on January 11, 2015 including Carl Bildt (former Prime Minister and Minister for Foreign Affairs of Sweden), Ana Palacio (Former Minister for Foreign Affairs of Spain), Ivan Krastev (IWM Permanent Fellow; Chair of the Board, Centre for Liberal Strategies, Sofia) and Fyodor Lukyanov (editor-in-chief, Russia in Global Affairs).

Organized crime is part of all our worlds—often without us even knowing. In our times of the return of geopolitics Misha Glenny, renowned author and journalist, presented and discussed the deep and intricate connections in the world of international organized crime and how these developments affect today’s politics and societies at the Political Salon “McMafia and the Geopolitics of Crime“ in January 2019. His best-selling non-fiction book, McMafia – about the globalization of organized crime – has been adapted into a major TV drama serie. 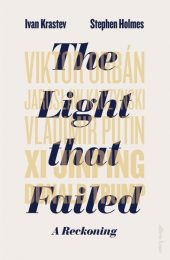 As Stephen Holmes and Ivan Krastev argue in their recent book “The Light that Failed,” (see excerpt published in IWMpost 124) the supposed end of history turned out to be only the beginning of an Age of Imitation. They argue that right wing populism and xenophobia that challenge liberal democracy in some Eastern European countries stems from a resentment against the demand to become Westernized.