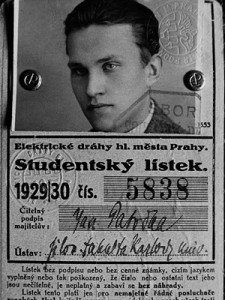 “The Philosophical Work of Jan Patočka” is the oldest research focus at the Institute. Work at the IWM’s Jan Patočka Archive since the 1980s aims not only to explore the Czech philosopher’s thought but also to making his oeuvre available in translation. Central to his thought is a historical and conceptual reflection on Europe as a philosophical idea and project. As Patočka argued the crisis of Europe is neither economic nor social, but philosophical, a crisis in the idea of Europe itself. The Archive is pivotal to furthering research on several themes in the spirit of Patočka's philosophical perspective. It has enabled the IWM to establish strong ties to individual scholars and institutions interested in pursuing research in this area. Scholars invited to the IWM have addressed some of the following issues under this research focus:

A key concept in Patočka's writings is that of “Europe”, which runs through his diverse studies of the history of philosophy, the meaning of the Enlightenment, modernity, modern war, technology, and European history. The close relationship of his thought to civilizational analysis, to questions of globalization and to debates in postcolonial studies opens promising avenues of enquiry as Patočka is perhaps one of the first thinkers to address the problems of what he calls “the Post-European” epoch.

One area of enquiry here would be an exploration of the “after” in ‘Europe after Europe’ in order to undertake a positive (as opposed to a defensive or exculpatory) articulation of Europe. Taking seriously his idea of a “Europe” after Europe (a Europe in quotation marks), it also asks what the idea of Europe might mean in the globalized world of today. Cross-disciplinary research (philosophy; political science and sociology; historiography) at the Archive addresses: a) Europe as a philosophical idea or principle; b) Europe as political and social reality; c) Europe as heritage and historical responsibility.

2) “New Wars” and the Human Condition

The First World War led to a unique mobilization of philosophers, including Jan Patočka, to reflect on the war and its aftermath in Europe. The 1920s and 1930s witnessed a systematic reconfiguration of the landscape of philosophical thought that arguably still defines us today. Surprisingly, while the impact of the war on literature, poetry, the arts, political thought and economic theory has been a subject of intense inquiry and interpretation, the significance of the war for philosophy has remained relatively unexamined, often misunderstood, or simply taken for granted. Research projects by philosophers at the IWM on the “new wars” have been interested in filling this lacuna.

A third research focus is concerned with the potential of Patočka’s writings for civilizational analysis in historical sociology. There are interesting points of convergence, for instance, between Eisenstadt’s understanding of “fundamentalism” and Patočka’s important analysis of modernity as a process of “radicalization”, which can be explored here.

The so-called “return of the religious,” the crises and transformations of secularism, the idea of a “post-secular society,” and the relationship between religion (esp. monotheism) and violence, are central topics in global media coverage as well as in our everyday life-worlds. Is public pressure on religion felt as repression and a denial of its right to existence? Could it be that the difficult place of religion in the modern (secularized?) world furthers violence? In the secular-scientific worldview, such a trend exacerbates reservations about religion. Should it be the task of philosophy today to work on the “mutual dis-enclosure” of religious and secular-scientific worldviews?

These are some of the issues that research at the IWM has addressed or will further explore under this focus.

Ludger Hagedorn
Head of the Patočka Archive and Permanent Fellow

The Czech philosopher Jan Patočka (1907–1977) is considered one of the most important Central European thinkers of the 20th century. With a few short exceptions, Patočka was banned from teaching and publishing in communist Czechoslovakia. However, he became an intellectual and moral authority, most notably through his legendary underground seminars.

Patočka was a co-founder and speaker of the civil rights movement Charter 77. He died in March 1977 after a series of police interrogations. This program is dedicated to commemorating his name and work.