When we speak of the present age as “secular”, we evoke a multiplicity of meanings. We sometimes refer to the fact that God or religion is no longer present in public life, or else we refer to the decline of belief and religious practice in our time. Modern secularity must be understood as a field of increasingly multiform contestation, in which every position is rendered uneasy and questionable because it can be challenged from many angles.

And yet, this situation has begun to change and will continue to do so under the impact of globalization. Obviously, a description of the process of secularization in the West cannot simply be applied to other cultures and civilizations. Some societies outside the West are facing the same problems and tensions, and sometimes respond with similar answers. However, in other societies we have to look closely how differently these problems and choices are understood. What does secularization or secularism really mean in other cultures? The same terms are taken up in very different traditions, and we lack even the right concepts and a framework with which to discuss them cross-culturally.

The goal of this research focus is to explore the ways in which globalization impacts the relationship between religion and secularism, thus intertwining the perspectives of different cultures, religions and theoretical backgrounds. The research is structured around five main topics: first, an examination of contemporary forms of belief and, second, of forms of disbelief; third, a study of different secular regimes; fourth, religion’s potential to mobilize people to violence, and, finally, the role of religion in creating social cohesion across gaps of income, ethnicity and nationality.

In 2018 the emphasis was on the connection between religion and social bonds. A conference on “The End(s) of Religious Community”, co-organized with the University of Vienna, included a keynote speech by Permanent Fellow Charles Taylor on “The Polysemy of ‘Religion’”.

In 2019 Charles Taylor was one of the laureates of the 9th edition of the “Ratzinger Prize,” which was conferred by Pope Francis at the Vatican on November 9, 2019. The Joseph Ratzinger Prize is an award of the Vatican Foundation Fondazione Vaticana Joseph Ratzinger – Benedetto XVI that has been awarded annually since 2011 for special scientific-theological achievements in the context of contemporary discourse. 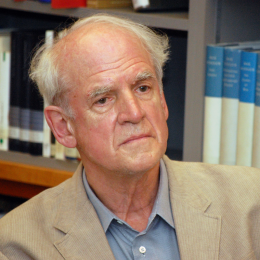