The Uncanniness of Climate Change 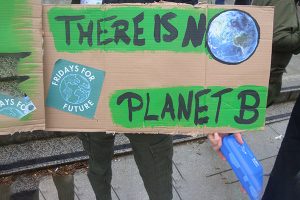 Noam Chomsky recently diagnosed major changes in our consciousness due to global warming that challenge the way we think about what it means to live a “good life”. We have the option either to accept the pressure to consume and accumulate as many commodities as possible or to strive for a world of solidarity and mutual support. In a globalized world, however, it has become difficult to demarcate what is emancipatory from what is potentially reactionary in terms of our engagement in daily life. Citizens are constantly confronted with an amorphous discourse on environmental issues that re-creates and transforms boundaries of inclusion and exclusion. Notions of “back-to-the-land” ideology, yearning for the “locally” grown and self-confident anti-consumerism roam in and out of politically pertinent fields between “green” and “brown”. [Read more]

In this article, published recently in the IWMpost, John Keane, a prospective fellow at the IWM, describes the worst environmental disaster since colonization that is challenging Australia’s democratic resilience. While the local media support the “natural disaster” rhetoric of the “neoliberal and soft-populist” Morrison government, citizens are aware of the links between increasing carbon emissions, rising temperatures and raging bushfires. Keane argues for a reimagining of democracy that breaks away from carbon-based capitalism and its anthropocentric norm that defines human beings without the ecosystems that support them.

Can Democracies Cope with Climate Change?

Claus Leggewie and Harald Welzer argue in their article in Transit 36 (Winter 2008/2009) that the key to overcoming the climate crisis lies in reviving the active participation of citizens. There are many examples of authoritarian regimes that brutally modernise at the expense of quality of life and the environment. However, the opposite assumption is also justified: that democracies are just as ill-prepared for the climate crisis as autocracies, that their dependence on lobbying groups and their short-sightedness through legislative periods make it more difficult to implement solutions. How must Western democracies change to meet the new challenges of the climate crisis? (In German)

Climate change poses unprecedented challenges to existing democratic institutions and policy instruments. This realisation was just as relevant in the winter of 2008—in the midst of the last financial crisis—when this special issue of Transit was edited by Krzysztof Michalski, Klaus Nellen and Sven Hartwig, as it is today. Some of the contributions come from the lecture series Environmental Policy and Solidarity—a Challenge for Europe, organized by the IWM in cooperation with the Grüne Bildungswerkstatt: e.g. Anthony Giddens, who argues for a renewal of state planning, and Ingolfur Blühdorn, who, contrary to the prevailing positive narrative prevalent in the “sustainability sector”, sees a “politics of unsustainability” at work which, in order to preserve the cultural status quo, also accepts the rise of right-wing populists, and many more. (In German)

In the 2014 IWM Lectures in Human Sciences Dipesh Chakrabarty analysed the implications of climate change for historical and political thinking and laid the foundation for his Tanner Lectures on Human Values in 2015. The first of the three lectures “Between Globalization and Global Warming: Towards a History of the Present” asks whether and how the phenomenon of global warming challenges central issues in the human sciences: the legacies of European empires, globalization and the rise of postcolonial thought. In the second lecture “Climate Change and the Question of Scale in Human Affairs”  Chakrabarty shows how our times of climate crises can be characterized by the coming together of three different kinds of histories: the natural history of the earth, the history of humanity, and the recent history of industrial civilization or capitalism. In the concluding lecture  “Climate and the Human Condition” Chakrabarty asks whether the climate crisis points to a fundamental change in the human condition. Based on Hannah Arendt’s work, he takes a stand on the work of Bruno Latour and others on the question of human agency in the so-called epoch of the Anthropocene.

In this lecture, held in April 2017 in the IWM library, literary scholar Eva Horn discusses the history of the idea of regulating and controlling the climate in architecture, urban planning and art. In order to understand the deeper reasons for anthropogenic climate change, we need to rethink the way in which we have cut ourselves off from the weather, while “culture” and “climate” have always been linked in an intriguing way. Climate control creates what has long been hailed by philosophers, geographers and colonial medicine as a “temperate climate”, a climate adapted to the culturally determined comfort zone of northern European bodies.

Hope and Despair: The Climate Crises

The last few years have been the hottest ever measured in Austria and extreme weather events cause disasters worldwide. While the ecological dimension is overwhelming, the social impacts need to be addressed at the global level. Karl Kienzl of the Federal Environment Agency and Helga Kromp-Kolb, a well-known climate researcher, investigate the connection between climate change mitigation and social policy. This discussion took place in September 2019 as part of the Vienna Humanities Festival and also deals with recent climate science diagnoses and various future scenarios. What could our life look like if global warming continues? What are the concrete threats? Is there perhaps reason for hope after all? (In German)

The Cunning of Uncertainty

Drawing on her studies of science and technology, as well as her experience as the President of the European Research Council (Europe’s leading funding organization for fundamental research) Helga Nowotny discusses in her book presentation The Cunning of Uncertainty with Matti Bunzl, how science thrives on the cusp of uncertainty. Research builds on what is known, while remaining open to the unexpected and the non-predictable. She argues that today’s societies, faced with rapid change, can learn from science not to feel threatened by uncertainty. Instead, we should appreciate that the future is radically open and collude with the cunning of uncertainty and the opportunities it offers.

The Myth of Sustainability: The Absurd World of the Tomato

That regionally grown products are more sustainable than those imported from far away is a persistent conviction, especially in Austria and Germany. The Dutch journalist Annemieke Hendriks, a former Visiting Fellow at the IWM, followed the life cycle of the tomato all over Europe. Taking the amount of greenhouse gas emissions as an important indicator of sustainability, the world of tomatoes is full of persistent myths and uncomfortable truths. She discusses her book (2017, be.bra verlag) and the bizarre world of the globalised food market with the Viennese socio-ecologist Michaela C. Theurl. (In German)