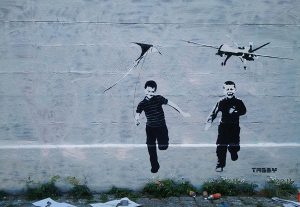 Are we living in a post-war and post-truth world? Armed conflicts are under way across the globe, but we seem to have lost our ability to frame and label them clearly. The language and doctrinal grammar of law are undergoing fundamental transformations in relation to excessive violence in the 21st century. So-called “new wars” symbolize these normative challenges: they transcend state borders and make intensive use of new forms of propaganda, while their protagonists try to circumvent international law. But not all hope has been lost.

No term better captures the complex shifts in how international armed conflicts are waged than “new wars”. The phrase reaches far beyond the disciplines of political science and international relations, neatly encapsulating many of the recent transformations in the domain of warfare. One of the most eminent scholars in this field is Mary Kaldor, Professor of Global Governance at the London School of Economics and Political Science and a frequent Fellow at the IWM, who gave a lecture at the IWM in May 2017 on “New Wars as a Social Condition”. Building on her previous work, she underlined the conceptual difference between old, “Clausewitzean” wars and what she calls “new wars,” which follow a different logic and employ different mechanisms of conflict resolution.

How do new wars challenge the regulations laid down in international law? In 2016, American law professor Rosa Brooks gave the IWM Lectures on Human Sciences on “The Future of War”. Brooks, who teaches at Georgetown University and is affiliated with West Point’s Modern War Institute, offered a striking description of these transformations: “War is bursting its boundaries,” she argued. Until recently, society—and law—maintained multiple boundaries between the state of war, where a degree of brutality was temporarily accepted, and the state of peace. In the era of new wars, however, these dichotomies are blurred. New wars are fueled by new technologies, drones in particular. Drones enable the state to kill people in undisclosed locations for undisclosed reasons. Therefore, as Brooks reminded us in her second lecture, we should “count the costs”: acts of “targeted killing” raise serious moral, political and legal issues.

New forms of warfare present linguistic challenges alongside these moral and legal ones: not only to academics seeking a framework to analyze these developments, but also to people living amidst such conflicts as they try to describe their everyday realities. In IWMpost No. 118, leading Ukrainian writer Serhiy Zhadan addressed the difficulty of writing about a war that is officially labeled an “anti-terrorist operation”—the war in eastern Ukraine. He notes that the war has radically altered the semantics of many concepts, such as irony, arrogance, cynicism or pathos. Zhadan claims that, under these conditions, “the distance between reality and poetry is a fair bit shorter than between, for example, that same reality and prose”. In July 2016 Zhadan held a ‘Ukraine in European Dialogue’ Solidarity Fellowship at the IWM.

The consequences of language’s inability to fully describe new wars are compounded by a more fundamental process at work across the globe: the dissolution of anything resembling a consensus on what constitutes “truth”. The greater difficulty—and, simultaneously, the heightened importance—of being able to find common factual ground amidst a state of war was one of the subjects discussed during the wide-ranging June 2017 panel discussion “Truth in Times of War” by Ukrainian journalist and IWM Ukraine in European Dialogue Fellow Angelina Kariakina, British journalist Peter Pomerantsev (a former IWM Fellow), and IWM Permanent Fellow Ivan Krastev.

What becomes of the traditional instruments of international law under such circumstances? Here, too, we see the collision between new wars and broader phenomena on the international political stage. To take just one example, since the election of Donald Trump the United States has turned away from liberal internationalism and legalism. Legal historian Paul Hahnenkamp, from the Institute of Legal and Constitutional History at the University of Vienna, analyzed this attitude towards the international legal order in his essay “Fight Fire with Fire: Leugnung und Normativität im Völkerrecht” in IWMpost 122. He breaks down the strategies being used to circumvent international law and contextualizes them in a global historical perspective: Hahnenkamp sees them as part of the most dangerous tradition of Realpolitik, particularly the “denial of international law”. 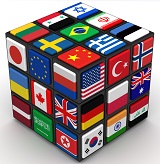 Still, we should not write off international law or the potential power of the sanctions it can impose. In IWMpost 121, Thomas Biersteker, Professor of International Security at the Graduate Institute in Geneva, gave an interview to IWM Junior Visiting Fellow Aurel Niederberger, a post-doctoral researcher at McGill University, entitled “Hitting the Target? Effectiveness of UN Sanctions”. Biersteker emphasizes the wide range of targeted measures that the international community can impose in response to violations of the international legal regime, including violations committed while waging “new wars”. He argues that “sending normative signals is more than just a gesture”, and that we should therefore not underestimate the effectiveness of sanctions. At the same time, we cannot expect that “sanctions are suddenly going to be effective, because we are dealing with cases where everything else has failed”.