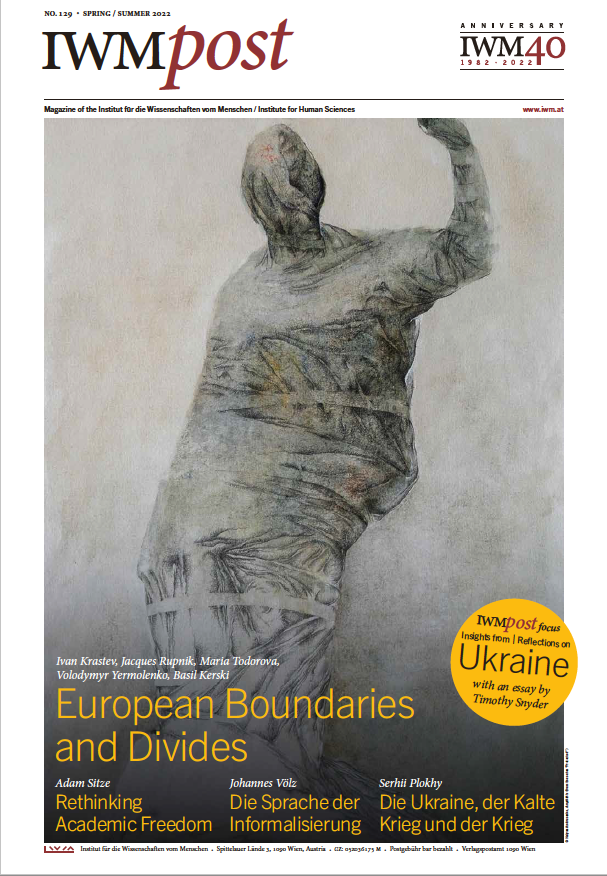 We intended to celebrate – IWMpost 129 was to contain a supplement for the fortieth anniversary of the IWM. However, since Russia’s invasion of Ukraine, we no longer felt like celebrating. Thus, we decided to dedicate the supplement to Ukraine instead. The guiding maxim of the supplement’s editor, Permanent Fellow Kate Younger: If we want to understand what is at stake in Ukraine today, not only for Ukrainians but for all of us, the only place to start is to listen to Ukrainians. With the exceptions of Timothy Snyder and the editor herself, all contributions to the supplement are penned by former or current fellows of the program Ukraine in European Dialogue. The creators of the photographs and artwork illustrating the articles are also from Ukraine.

From the originally envisaged anniversary supplement, we decided to include in the regular issue only the focus on “European boundaries and divides.” Permanent Fellow Ivan Krastev and Volodymyr Yermolenko address the question of Europe’s borders against the backdrop of the war, each from a different perspective. Jacques Rupnik and Maria Todorova, for their part, discuss the relevance of two categories that enjoyed great prominence in the first post-socialist decade: “Central Europe” and “the Balkans.” Finally, Basil Kerski’s essay points to the often neglected transnational and European dimension of the Solidarność movement.

The remainder of IWMpost 129 displays a variety of topics as well as a diversity of entry points and disciplinary approaches. Some of the essays address issues of democratic decline (Gniazdowski, Sitze, Völz, Regatieri, Schwartz), others deal with implications of the Cold War (Plokhy, Dodd), questions of art and museum exhibitions (Glanc, Kostro), Israel’s international relations, and migration in the Global South (Aung, Acosta, Sur). Hannes Werthner’s essay on digital humanism introduces a new and promising research focus at the IWM. Finally, the IWM new rector, Misha Glenny, introduces himself.

I hope you enjoy the read.

Israel
Austria and Israel: On Memory and International Relations / by Noga Sagi
The Israeli reaction to the War in Ukraine / by Merav Amir