Ukraine and the Borders of Europe 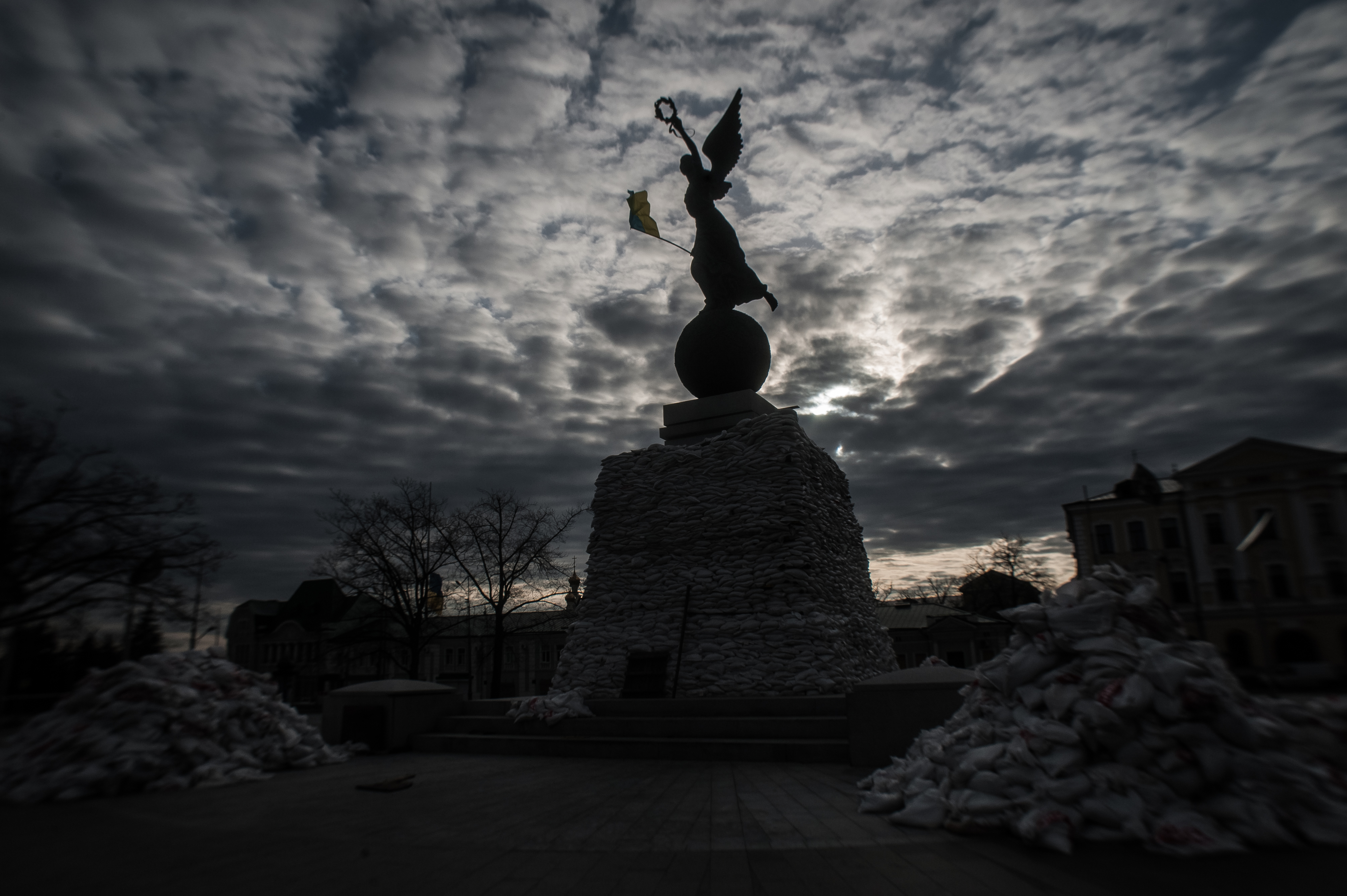 “Nika,” the Monument to Independence “Flying Ukraine,” in the center of Kharkiv, which locals covered with sandbags to keep it from ringing during airstrikes (March 27). Photo: Alina Smutko

Europe’s paradoxical self-confidence and loss of belief in itself led it to overlook the systemic threat coming from Russia: not only to Ukraine but to all of the continent. As Ukraine fights for its existence, it can remind Europe of its forgotten past and pull it forward towards a shared, revitalized future.

War changes the meaning of things. Usual notions of time and space collapse: you do not know if you have a future, even a tomorrow, and you no longer know what place is safe. A nice bourgeois Kyiv suburb like Bucha can turn into a site of genocide within a few days. Civilization is fragile, like a baby.

War brings you to a very direct meeting with death. Death can catch you well before you begin to understand that it is so close. You can have breakfast in your apartment, thousands of kilometers away from your enemy, and then be dead from a missile attack. You probably will not have time to be scared.

You judge things by their capacity to bring you closer to life or death. A window is no longer a window: during an eventual air strike you had better stay away from it as glass can be the most dangerous threat to your body. A car is no longer a car: it is not a luxury nor a means of transportation, it can be a life-saving machine. It can also be a death trap, as for those who tried to escape from besieged cities but were shot dead by Russian soldiers or smashed by Russian tanks inside their cars. We have seen several car cemeteries in Bucha, Hostomel, and Irpin’—the most tragic Kyiv suburbs. The question you ask, looking at these smashed, shelled, and burnt cars, is whether people were still inside when this happened. In many cases, they were.

War changes the meaning of things but it also changes the meaning of concepts. Civilization is too fragile; evil is too real; happiness is too unbearable. Can you be happy after Bucha and Mariupol? Can you exchange jokes, make love, plan a vacation? Most probably, not. At least not for a very, very long time.

Europe is also changing in this war. Before it, Europe was too self-confident and too self-doubting, at the same time. Self-confident because it underestimated evil. It believed evil is small, restricted to crazy local dictators, terrorists, and extremists. Self-doubting because it no longer believed in itself and thought that the things that created it (democracy, pluralism, etc) were now leading to its collapse.

In both aspects, Europe was wrong. The evil it has been confronted with in Russia’s invasion of Ukraine is not small but big.  Paradoxically, it is an evil that mobilizes a huge state machine for its purposes while at the same time presenting itself as defender of all anti-systemic movements around the world. It has immense war resources but uses them through terrorist tactics, destroying the very idea of a safe place. It combines immense petrification and immense fluidity.

Europe was also wrong about its life instincts. It might have been suicidal at the center, but it is full of life at its borders. Ukraine shows that European values are not only defendable, but defendable heroically. And that dignity has a form, a taste, and an experience.

In the past decades, Ukraine raised the question of Europe’s borders again. But the problem was that Ukraine expressed its wish to join European Union when the latter was tired of enlargement—and when Russia was no longer tired of enlarging itself.

In a way, Ukraine stood against the will of both the European Union and Russia. It insisted that the European Union should enlarge when it did not want to. It insisted that Russia should not expand when it did want to. Contrary to simplistic geopolitical theories, which see the world only as a chess game between great powers, Ukraine has shown that a country can go against the will of much bigger players. All it needs is to believe, to be strong-willed, even stubborn in its faith.

Russia’s maniacal obsession with Ukraine is not only caused by geopolitics or culture wars. It relates directly to how Russia sees itself. The problem is that Russia’s vision of itself excludes the idea of borders. It sees itself as a civilization, a world, an empire. All these concepts imply that borders between states are needless and obsolete. As Putin once said, “Russia’s borders end nowhere.”

Initially, Europe was born from a marriage between two ethical conceptions: the ancient warrior ethos and the modern bourgeois ethos. The warrior ethos implied that the ultimate goal of humans is to seek victory in a battle. The bourgeois ethos implied that it is to seek mutual benefit in the marketplace. A sound society should be able combine both. If you are only a warrior, you will be prisoner to an endless zero-sum game, and in any opponent you will see an enemy. If you are only a bourgeois, you will always seek only a positive-sum game and can end up making deals with killers.

In the past decades, Europe was too market-oriented, not only in its economy but also in its thinking, in its politics, and its moral choices. It thought that everything related to the warrior ethos leads to the horrors of totalitarianism. It was keen to make deals with everybody, and therefore it made deals with a killer in Russia. It facilitated the return of twentieth-century totalitarianism in the twenty-first century, precisely by trying to avoid this. Europe was a new Oedipus, running into its destiny by trying to avoid it.

This does not mean that the bourgeois ethos is bad, but it is certainly not enough. Positive-sum thinking is good, but it has its limits. The warrior ethos is an important counterbalance. The culture of courage should be a complement to the culture of compromise.

In this sense, Ukraine is bringing Europe to its forgotten past, or maybe to its yet unknown future. It brings an important element of European identity back: the idea of a Europe of warriors. Warriors are needed when life is under threat. Warriors see reality in the moment of its possible death and also in the moment of its possible rebirth. Ukraine is a Hamletian Europe that takes the question “to be or not to be” literally, when the choice is to live or to die. It is a Europe that understands it is mortal—not because of internal decadence, but because of an existential external threat, able to smash civilization in a week. It is a Europe that understands mortality is something that should make our fight for life stronger, not weaker. Mortality is a key human condition, and when you see death approaching you should do your best to protect life against it. You should fight.

Ukraine was often conceived as a borderland between Europe and non-Europe. Today it is something else. It is a place where Europe is being reborn.

Volodymyr Yermolenko is a Ukrainian philosopher and journalist. He was a visiting fellow at the IWM in 2021.