Asia’s Frontiers: Who Moves, and Who Does Not? 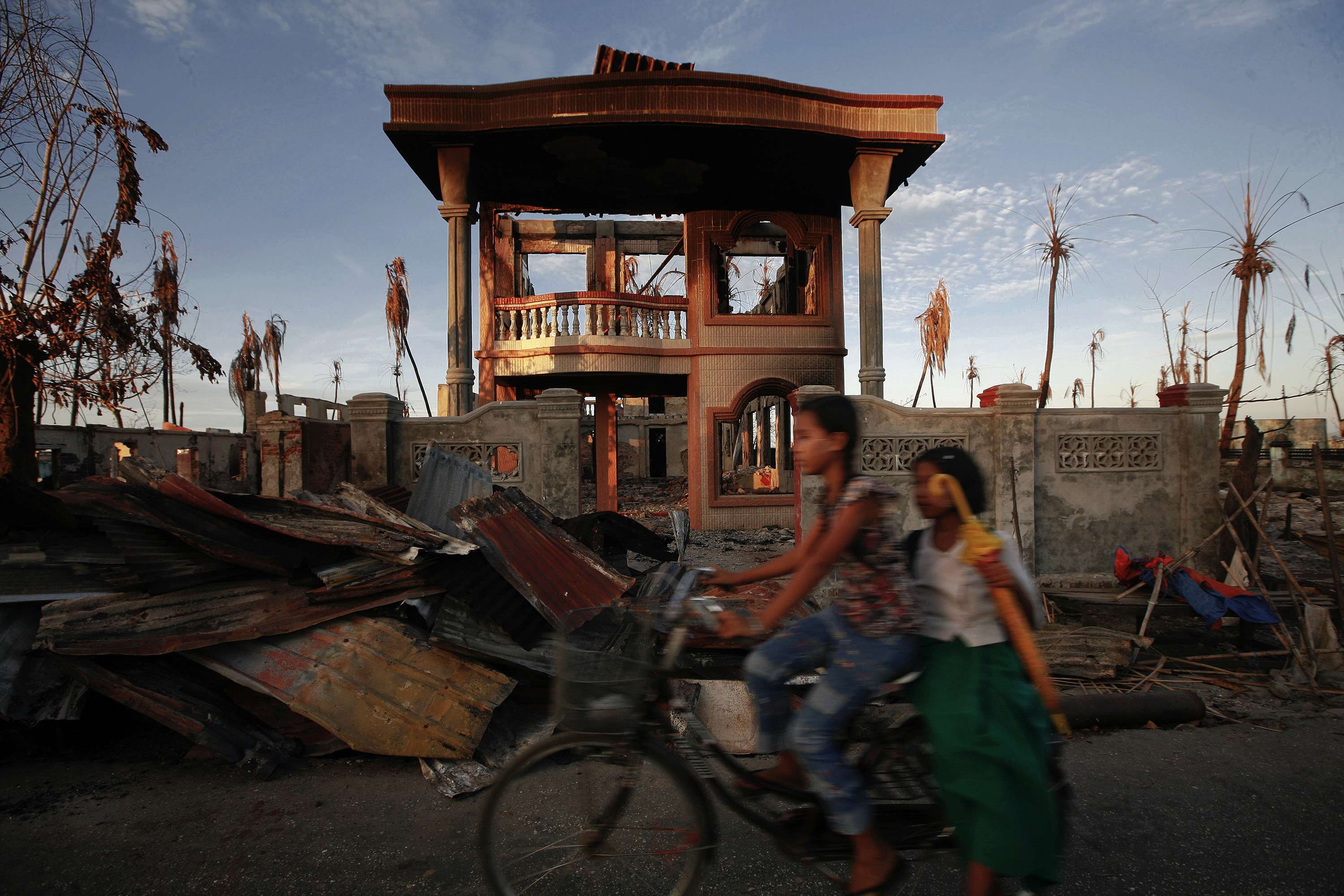 Girls ride a moped past a burnt house during the violence at East Pikesake ward, in Kyaukphyu November 6, 2012. Photo: STRINGER / REUTERS / picturedesk.com

Along Asia’s capitalist frontiers, port, highway, and economic zone projects promise a new era of connectivity based on smooth flows of goods, capital, and labor. Yet these projects also capture and contain displaced people in striking ways—from internment and refugee camps to resettlement villages and more. Who moves and who does not along these frontiers, and why does this matter?

In 2012, the Muslim quarter of a town in Rakhine State, in western Myanmar, burned to the ground. Rakhine Buddhists used swords, iron rods, and spears to attack Kaman and Rohingya Muslims, while setting fire to their homes, buildings, and boats in this coastal town. Some 4,000 people fled in fishing boats to a series of camps up the coast, while another 1,700 took shelter in a camp outside the town, known as Kyaukphyu. Townspeople and villagers had warned that the Kyaukphyu deep-sea port and special economic zone (SEZ) project—part of the China-Myanmar Economic Corridor, a Belt and Road Initiative project stretching from the Rakhine coast to southern China—had inflamed tensions between the state’s Buddhist and Muslim communities. Facing displacement and dispossession, Kyaukphyu residents complained bitterly about employment prospects; any jobs, they worried, would go to Chinese workers. Worsening economic conditions exacerbated existing discontent between Buddhists and Muslims. When I visited Kyaukphyu after the unrest, I could see that economic unease was not the only factor in play. Still, residents told me, it would be a mistake to ignore the SEZ.

What is the relationship between this violent unrest and the Kyaukphyu SEZ project? Why might it matter that, along a trade corridor promising movement, mobility, and flow—of goods, capital, and labor—there is, rather, the violent encampment of people displaced and dispossessed? The events of 2012 provide a stark reminder of capitalism’s complex relationship not only to mobility, but also to immobility. On one hand, the dominant understanding of capitalism holds that, fundamentally, it produces movement across space: resources extracted and transshipped, commodities produced and distributed, labor uprooted and made mobile along the world’s supply chains. Infrastructure projects play an important role in this. They are the material channels of movement; they are things that enable the movement of other things. On the other hand, critics of capitalism have long pointed out that it is also rooted in practices that immobilize, capture, and contain. From plantation slavery to the prison cell, from land enclosures to reservations, and from bordered nation-states to the confinement of women in the domestic sphere, capitalism has always depended on acute forms of capture and containment. This alternate understanding of capitalism’s relation to mobility resonates across indigenous studies, postcolonial theory, and radical traditions in Black and feminist thought. It is no surprise, then, that a striking mode of spatial containment—the camp—should arise in the context of a major infrastructure project like the China-Myanmar Economic Corridor.

Other parts of Asia suggest that spatial containment, even encampment specifically, is not an entirely unusual feature of capitalist frontiers. Across China’s western borderlands, road, rail, and trade corridor projects have proliferated in recent decades. Many are linked to the Belt and Road Initiative, with its sweeping promises of connectivity. Yet labor camps, reeducation camps, and internment camps have proven integral to the dispossession of Uyghur Muslims on this frontier. Between Beijing’s New Silk Road discourse and People’s War on Terror, high-tech, surveillance-oriented modes of carceral capitalism underpin a disciplinary and ideological attempt to adjust Uyghur subjects to the imperatives of party-state development. Labor practices in the region also insert Uyghur workers into conventional supply chains and production networks, from cotton cultivation to factory-based light manufacturing and forced labor in internment camps. This reengineering of Uyghur lifeworlds depends on practices of confinement and control on a frontier otherwise oriented towards dramatic forms of movement, mobility, and flow.

Meanwhile, in Turkey, planners and policymakers have proposed a series of economic zones aimed at providing employment to displaced Syrians. These proposals are part of a wider policy discussion about economic opportunities for Syrians in the context of a protracted displacement crisis in Syria and the European Union’s ongoing border-externalization efforts. These factors have created pressure to control forced migration flows in economically productive ways. While economic zones for Syrian employment in Jordan have attracted attention—alongside plans for labor-market integration more generally—similar proposals for Syrians in Turkey are less known. Plans to remake Syrians as a labor supply merge humanitarian and economic imperatives. They aim to immobilize and contain forced migration flows not in the spatial form of the camp, but rather of the economic zone, thereby tying diplaced persons into local and regional circuits of production and accumulation. Those proposals have not yet come to fruition. Instead, ongoing programs aimed at the integration of Syrians in urban and peri-urban municipalities Turkey suggest more of a contrast to modes of containment and encampment in Myanmar and China.

It is not the case that no mobility is at stake in such spaces. The question is mobility—or immobility—for what, for whom, and at what scale. In Myanmar’s southeast, another port and SEZ project near the town of Dawei aims to link the country to a powerful neighbor, in this case Thailand. During fieldwork in Dawei, I found that there, too, residents face displacement, dispossession, and a particular form of spatial capture: the resettlement village. They look forward to employment opportunities, but the historical record suggests this is in vain. In Southeast Asia, attempts to concentrate large labor forces have long depended on migrant labor rather than local workers. From colonial plantation economies to the industrial zones of the postcolonial era, migrants have been seen as cheaper labor and easier to discipline, while local people have been seen as lazy, uneducated, and backwards. Myanmar’s largest SEZ projects—in Kyaukphyu and Dawei—are not even premised on labor-intensive manufacturing. Geared towards heavy industries like petrochemicals, they are likely to produce relatively few employment opportunities—for generally higher-skilled workers.

Thus, at a certain scale, the Kyaukphyu and Dawei SEZ projects—like the Belt and Road Initiative more broadly—do provide for the movement of goods, capital, and labor. They are things that enable the movement of things. But, at a more granular level, they have also seen stark forms of capture and containment, foregrounding capitalism’s dual relation to mobility and immobility. To ignore capitalism’s close relation to immobility and containment is to sideline the history of indigenous dispossession, slavery, mass incarceration, and reproductive labor. Moreover, policymakers continue to rely on economic zones and trade corridors as vehicles of capitalist development and regional integration. Grasping their implications across multiple scales is vital. To understand labor, migration, and development on today’s capitalist frontiers, it is not enough to ask who moves; one must also ask who does not.

So what about the relation between the Kyaukphyu SEZ project and the violence of 2012? It is indirect, at best; it is a question of strained communal relations that exploded amid ongoing displacement and dispossession. Yet, as residents insisted, it would be foolish not to see any link whatsoever. After all, capitalism has always depended on and benefited from extra-economic forms of coercion, compulsion, and confinement, even if specific events or practices exceed formal economic intentions. In this sense, it is notable that the Chinese government welcomed the brutal response by Myanmar’s military to the unrest in Rakhine State. Premier Li Keqiang claimed the security operations—targeting Rohingya areas of the state, and widely considered tantamount to genocide—provided much-needed stability in an area of significant Chinese investment. Much of Rakhine State’s Rohingya Muslims, meanwhile, are now dispersed across camps in the state and in southern Bangladesh.

Geoffrey Aung is a postdoctoral research and teaching associate at the University of Vienna’s Department of Social and Cultural Anthropology. He was a junior visiting fellow at the IWM in 2021.