There are very few foreign journalists in Belarus; the Lukashenko government has repeatedly refused to grant visas to journalists and closed the borders. In this context, the IWM decided to create this blog, “Chronicle from Belarus.” The Chronicle is an archive of curated material from a wide variety of sources, including first-person testimonies.

Where possible, we have commissioned translations from Russian, Belarusian, Ukrainian and Polish into German and/or English and posted the original together with the translation.

Texts are posted in their original language, with their titles translated into English and a link to a translation of the whole text when available.

Chronicle from Belarus: An Introduction

01.04.2021
Presidential elections have long been merely pro forma in post-Soviet Belarus, where Alexander Lukashenko has been ruling as a dictator for more than a quarter-century. In May 2020 he imprisoned Sergei Tikhanovskii - an oppositionist YouTube blogger - immediately following Tikhanovskii’s announcement that he intended to run against Lukashenko in the presidential elections. In July Tikhanovskii’s wife, Svetlana Tikhanovskaia - an English teacher and the mother of their two young children - announced that she would run in Sergei’s place.
Read more 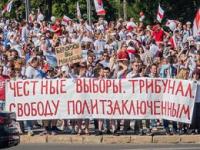 01.04.2021
The long-form interview - a kind of narrative conversation - has long played a special role in the literature and history of East and Central Europe. What follows are a selection of interviews, including some conducted by IWM specifically for the Chronicle, which provide a dialogical perspective on events as they unfold.
Read more 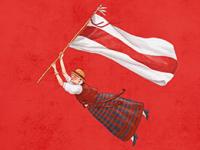 Women in White: Gendered Dimensions of the Belarusian Protests

01.04.2021
On 13 August 2020, following three days of terror, when it seemed that all might have been lost, tens of thousands of women, dressed in white and carrying flowers, came out onto the streets. They have come out continually since then, rejecting violence and demanding accountability. A fearless seventy-three-year-old woman, the diminutive, white-haired Nina Baginskaya, has become the emblematic figure of a feminist revolution of a new kind.
Read more 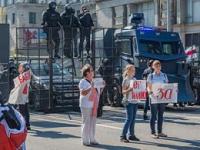 01.04.2021
Sławomir Sierakowski, from Warsaw, and Nataliya Gumenyuk, from Kyiv, were among the very few foreign journalists present in Belarus in August 2020. We include their reporting from the ground as well as documentation by other observers and journalists, including IWM Visiting Fellow Volha Biziukova, who wrote about her experience as an election observer at the Belarusian embassy in Vienna.
Read more 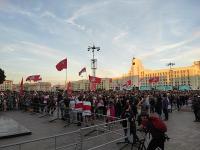 01.04.2021
Texts chosen to give a brief overview and introduction to the evolving situation in Belarus.
Read more 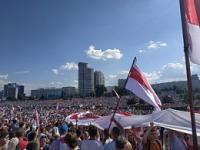 31.03.2021
A curated archive of videos that document the ongoing crisis in Belarus.
Read more 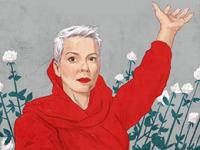 31.03.2021
Visual artists have played a large role as both participants in and as documenters of the protest movement. Yana Chernova’s “Belarusian Venus” - an oil painting depicting a female nude bruised from beatings - has become the iconic image of a dictator’s brutality.
Read more 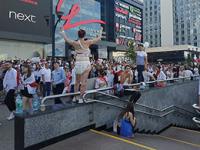 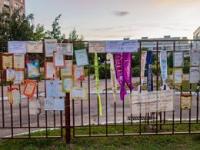 31.03.2021
A curated archive of open letters that have been published during the Belarusian crisis.
Read more 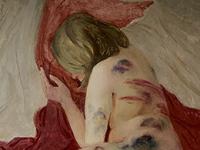 31.03.2021
Since the beginning of protests, Belarusian activists have managed to organize a very effective society and have create a range of tools and services which help people to organize themselves in communities, write governmental complaints, be aware of their own rights and more.
Read more

31.03.2021
Belarus's “Siloviki” or “men of force” - a term referring to members of the security services - have enabled Lukashenko to remain in power. They have responded to the protests by detaining, beating and torturing nonviolent protestors.
Read more 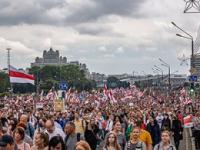 Selection of Essays and Opinions

31.03.2021
Novelists, philosophers, columnists, publicists and political analysts - both in Belarus and abroad - have expressed their own emotions and offered their own analyses of the Belarussian situation. Included here are essays by Olga Tokarchuk, Volodymyr Rafeenko, Vitaliy Portinkov, Katja Petrowskaja, Olga Shparaga, Masha Gessen and many others.
Read more 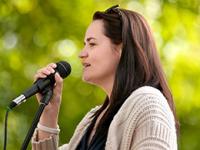 31.03.2021
Tikhanovskaya speeches that have appeared in different Media:
Read more

On the Nature of Political Antagonism in Belarusian Society

31.03.2021
Antagonism is an irreconcilable conflict between two parties caused by a radical contradiction in their positions (interests, principles, beliefs). The political field of Belarus was structured antagonistically already during the pre-election campaign, namely when Svetlana Tikhanovskaya, supported by Maria Kolesnikova and Veronika Tsepkalo, announced her one-item program: to hold the new fair elections. Against the background of the arrests of activists and two key candidates for participation in the elections (Sergei Tikhanovsky and Viktor Babaryko) as well as the refusal to register Valery Tsepkalo the brevity of Tikhanovskaya's program made clear that her crucial discrepancy with the then legitimate president consists in a completely opposite understanding of relation between law and power. Whereas Tikhanovskaya insisted on the principle of the rule of law Lukashenko hold to the a-la Schmittian principle of sovereign power according to which a sovereign (monarch) has the right to make extraordinary decisions not based on the law if he consider it  necessary in the interests of the state's security.
Read more

The Heuristics and Poiesis of the Belarusian Revolution

09.03.2021
Heuristics are utilized in the discovery of new things. The classical concept of poiesis is the creative making of something new. The former has to do with perceiving reality; the latter is concerned with transforming it. Experts from a variety of fields agree that the Belarusian Revolution is a historically unique phenomenon, fundamentally new in multiple ways.
Read more

Toward a Genealogy of the “Society of the Shocked”

04.03.2021
The basic foundation of social cooperation in any society is what is known in Russian as zdravyi smysl [literally: sound sense, or good judgement]. In English this concept is referred to as “common sense.”
Read more

01.03.2021
A calm silhouette against the background of the color of purity and peace. A person is peaceful, and yet the body is exhausted and severely beaten. Here, any anatomical or light-and-shadow analysis seems meaningless and impossible because this is not what catches the eye in such circumstances. In spite of it all, this person holds steady.
Read more

Aliaksander Bystryk has been imprisoned again, now for the third time.

Putin is a Student of Lukashenka’s: A Conversation Between Sławomir Sierakowski and Adam Michnik

18.09.2020
Translated by David Kurkovskiy August 21, 2020 Original interview in Polish, published by Krytyka Polityczna on August 12, 2020. Whoever governs Belarus is fated to build relations with the Kremlin. And as long as the Kremlin remains as strong as it is, it is the Kremlin that will set the terms. At the same time, the situation will look different once something in Russia changes – says Adam Michnik in a conversation with Sławomir Sierakowski.
Read more

18.09.2020
August 11, 2020, Minsk Monday evening’s peaceful protest in Minsk was scheduled for 7 pm on Victory Square, around the Minsk Hero City Obelisk. But police blocked off the square and the streets leading to it, so demonstrators could not gather there. In accordance with the opposition’s contingency plan, people instead gathered to protest around the city’s main metro stations. Around 10-11pm, police moved to suppress the protests around several of these metro stations. I witnessed clashes in the two places which, according to rumors circulating in the city, saw the greatest use of police violence, although I cannot verify this. A barricade was constructed near the Riga shopping center, where about 5,000 demonstrators gathered. Initially there was no police presence. The protest was entirely peaceful; cars and buses stood in a long traffic jam, expressing solidarity with the protestors, there were many white-red-white and white flags, and people called out “Zhyve Belarus.” There was no aggression and no hooliganism.
Read more

15.09.2020
First published in Belarusian on Koinè. Translated from Belarusian by Aliaksei Kazharski For a short period of time, Belarus has become a top media event to the world. The event is less depressive than the coronavirus stories and more inspiring for supporters of democracy who have been lately given many reasons to be pessimistic by the rise of right-wing populism. This is why Belarus is subject of many discussions and statements. Even the famous spokesman of left-wing intellectuals Slavoj Žižek felt that he had to share his view on the events. Surprisingly, his take did not live up to his reputation. He demonstrated poor knowledge of the subject and a tendency to use a set of conceptual cliches.
Read more

Nataliya Gumenyuk: Why weak points of Belarus state may play in favour of the protests

Volha Biziukova “I was an Election Observer”

18.08.2020
August 18, 2020 On the 29th of July, I entered an elegant 19th-century mansion in Hütteldorf, the neighborhood in Vienna where the Belarusian embassy is located. For the next two weeks, its ornate main hall would become voting station #75. I handed in my application to become an election observer, but the election commission members, all embassy employees, did not know how to proceed; they looked lost. It seemed that I was the first independent election observer they had encountered.
Read more

The Head of the Central Election Commission of Belarus: “Tikhanovskaya’s address was recorded in my cabinet”

17.08.2020
Lidiya Ermoshina, the Head of the Central Election Commission of Belarus [TsIK], confirmed that presidential candidate Svetlana Tikhanovskaya’s address, in which she reads, from a piece of paper, a call to stop the street protests, was recorded in her cabinet in the presence of two high ranking law enforcement officers.
Read more

Angela Espinosa Ruiz: An Ode to the Victims of the OMON* and Violence in General

Andrey Vozyanov: Can’t find the words to explain how dreadful is the ongoing in Belarus

16.08.2020
Several hundreds of relatives gather near IVS temporary holding facility in Minsk and try, without success, to know where should they bring parcels for their children.
Read more

Sławomir Sierakowski: Report on the Events of August 9, 2020 in Minsk, Belarus

16.08.2020
The Belarusian opposition has adopted three principles of protest: first, it is to be absolutely peaceful; second, it is to be long-lasting—that is, it will continue until it succeeds; and finally, it is intended to be self-limiting in a political sense. Supporters of opposition candidate Sviatlana Tsikhanouskaya have three specific goals: free elections, ending repression, and restoring the previous, democratic constitution. This approach, this explicit self-limitation, makes the process very clear to the public, very motivating, and evidently effective in the sense that people are going out into the streets of cities large and small in unprecedented numbers. In Minsk we have seen crowds of 60,000-70,000; in smaller towns, protests have numbered up to 20,000.
Read more

Natalia Gumenyuk: On the Barricades, Under Fire from Stun Grenades, and With No Internet. A Special Report from Minsk on the Elections in Belarus

Aliaksandr Bystryk: “Lukashenka is the abusive husband who beats his wife when she wants to leave. . .”

13.08.2020
Aliaksandr Bystryk is a PhD candidate in the Department of History at Central European University. He comes from a small town in western Belarus, and is currently living in Minsk. I sent him the following questions on Tuesday 11 August, after the election results were announced and just before presidential candidate Sviatlana Tsikhanouskaya was forced to leave the country. Aliaksandr sent me back his answers on Wednesday afternoon, 12 August. On Thursday morning, 13 August, he sent me this update:
Read more