On the Way to a New Belarus: Critical Notes on the Emerging ‘Work on Mistakes’ 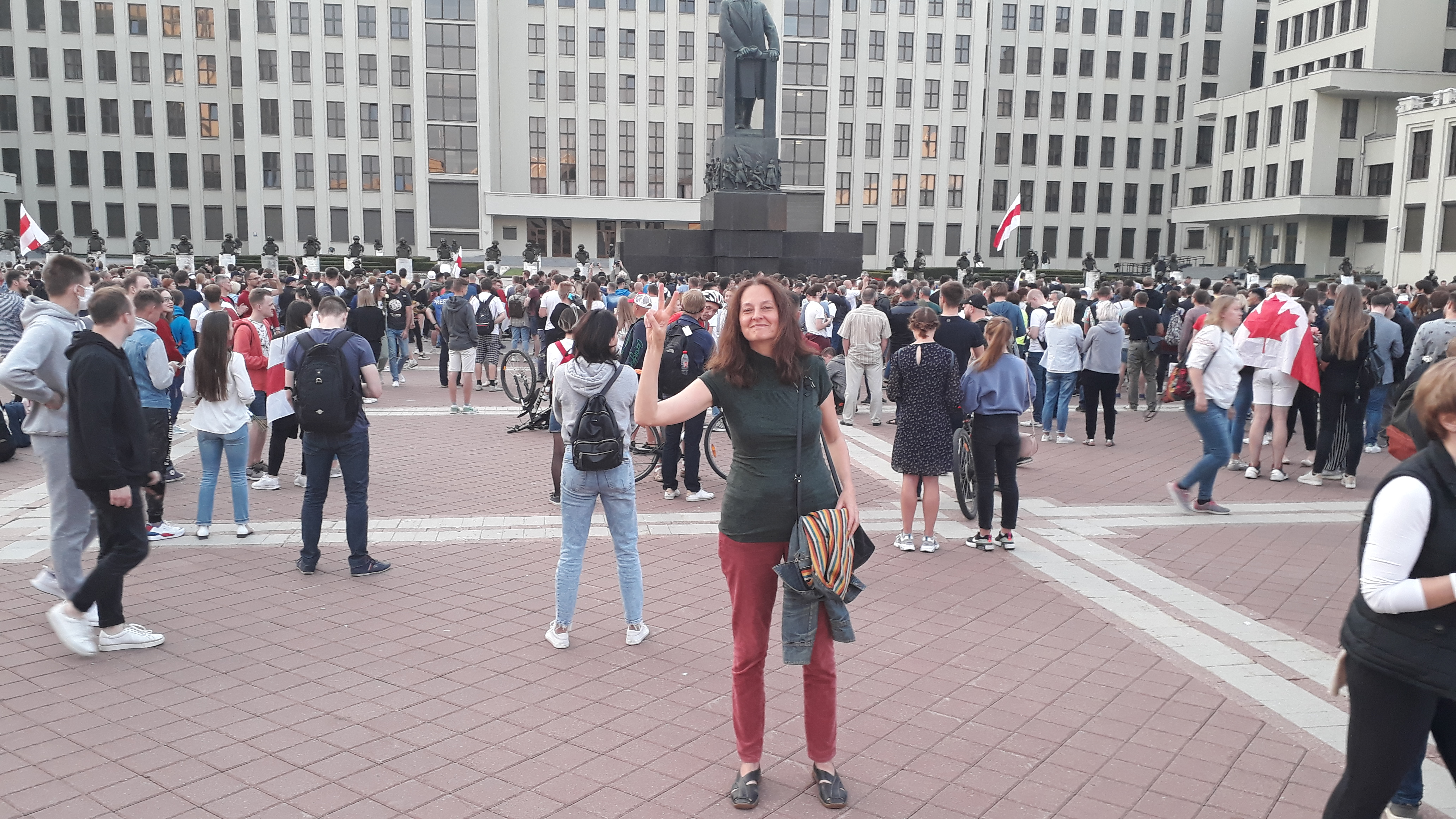 In 1975, the famous Czech philosopher Jan Patočka released the book Heretical Essays in the Philosophy of History, which appeared in samizdat in Prague. Patočka was a founder of Charter 77 and one of its first signatories. He died in the year of Charter 77’s founding after a multi-hour police interrogation. In his book, Patočka defines history as a process of people rethinking and reconceptualizing the certainties of their collective lives.

From this perspective, August 9, 2020 can be regarded as the beginning of the authentic history of Belarus, which to that point had been characterized merely by a kind of latent intuition of its own historical potential. Patočka wrote that history begins as the result of the “shaking” of habitual, everyday certainties. At that time, everything that had once seemed obvious, self-evident, and reliable falls apart, necessitating a radical revision of the foundations of social life. Patočka argued that this “shaking” is an existential experience, which is the origin of philosophy, politics, history, and most importantly, defines the relationships between them. In his thought, the key philosophical concept is solidarity, specifically the “solidarity of the shaken.”

As a process of the collective, deep transformation of the human world, history is only possible on the basis of “the solidarity of the shaken.” This happens when people, having realized their responsibility for the development of the human world, begin to act together in the name of common goals. For Czechoslovak dissidents, who decided to publicly defend human rights in their country, Charter 77 became a concrete example of solidarity, and at the same time, it was living proof of the essential connection between philosophy (the critical articulation of fundamental principles), politics (the practical achievement of common goals), and history (the movements of social transformation).

The Belarusian Revolution is also an instance of this “solidarity of the shaken.” It is an example of the creation of a community of “the shaken,” those who have decided to openly protest against violence and lawlessness. After the events of August 9–11, 2020, hundreds of thousands of Belarusians understood that a return to the previous, established way of life was impossible and that the reinvention of society was our historical task. We must acknowledge that we are only at the start of the process. Between the existential shakenness, which does not allow for a return to the passive acceptance of a pro-regime status quo, and the practical reinvention of political institutions (in the extreme case, of government institutions as such), there is a large area for collective reflection, which takes a great deal of time, strength, and patience—and a sympathetic willingness to cooperate and understand one another.

We are learning to be subjects of history and about the meaning of political solidarity. It seems to me that critics who have rushed to declare the end of the Belarusian Revolution overlook the fact that becoming a political subject takes a great deal of time and experience. One must recognize the fact that political cooperation (from neighborhood group chats to coordinating the movements of various political actors) is being learned in the midst of an ongoing revolution. This is the case not only because so many protesters were previously apolitical but also because the ongoing political crisis is entirely unprecedented, and the starting conditions of the revolution (decentralization and the arrest or emigration of the leaders) required making extraordinary decisions.

Looking back, many observers write about what ought to have been done, but was not. It is necessary to draw conclusions, of course. But while conducting a postmortem, it is important to proceed not simply from ideal models, but from the actual given circumstances. Paying attention to the facts on the ground (with all of their pluses and minuses) allows us to see that many of the things that, according to the critics, “ought to have been done,” could not have been done “at the crucial moment” due to the difficult combination of political and human factors that obtained at a given moment. Ignoring the impossibility of realizing some kind of theoretical “correct idea” causes criticism to stop being constructive and leads only to the loss of faith in leaders and disunity among protesters.

Can one lay blame for casualties at the feet of “oppositional” candidates, who created hope for change among the population by participating in the presidential election? This opinion turns away from what was noted above: that the historical reconstruction of society is a question of collective responsibility. Could the key figures of the united opposition, led by Sviatlana Tsikhanouskaya in the election, have foreseen the kind of bloody price that would be extracted for publicly expressing their disagreements with the existing regime? Of course not. Obviously, people in their 30s and of course those who are older, who had at least a passing interest in the politics of the country, knew that there had been “blood” in 2010 under Lukashenka during the clearing of the Ploshcha and prior to 2010 with the disappearance of opposition politicians. The thing is, however, that “blood” is not an abstraction—it is always real. Who could know ahead of time—even imagine, dream, or assume—that it would be blood on this scale? Blood that filled streets and prisons across the country, the blood of those beaten with batons and who were deprived of hope of even receiving medical treatment?! We have seen testimonies from officers who admitted that even those within the system were shocked by what took place. It was the factual reality of “blood” on this scale—unexpected and unimaginable—that was the shock out of which revolutionary awakening grew.

Many describe the events in Belarus in terms of “belated nationhood” and see in the revolution a chance to complete the process of national self-determination, which since the ascension of Lukashenka to power seemed to be put off once again. I do not seek to dispute the applicability of such an approach. Yet I would simply propose that an alternative perspective is also appropriate, specifically one in which the Belarusian case can be understood as the “leading edge,” which is relevant not only locally but globally—and first of all, within the all-European context.

From the time of the collapse of the Soviet Union, the socio-political context has changed significantly. At the beginning of the 1990s it seemed like there was no alternative to neo-liberal capitalism for the former Soviet republics. Today, on the other hand, observers speak of a systemic crisis of neo-liberal capitalist societies. The key indicators of this crisis are the decline of democracy (citizens’ decreased interest in political participation and a loss of faith in existing political institutions) and the generalized experience of “the disappearance of the future” (this symptomatic diagnosis is observed by social theorists within the broadest range of countries). In this context, the revolution that began in Belarus becomes something striking: it shows at once our civil society’s commitment to European values, a living demand for democracy at all levels, and the insistent rejection of violence.

The historical work of reconstructing our society, when placed into the global context, becomes intertwined with the contemporary search for new trajectories of development in Western societies. The question of democracy’s future is at the top of the agenda for everyone, which unites all European societies, including Belarus.

In August 2020, we experienced an unprecedented historical turning point: toward becoming the subjects of our own history and toward a new Belarus. Today the most important thing that is demanded of us is to find methods of demonstrating/building our solidarity with one another. That is what holds us together and that is the most reliable basis for a new revolutionary breakthrough.

Translated from Russian by Markian Dobczansky for IWM Chronicle from Belarus.

Tatiana Shchyttsova – philosopher, Professor at the Department of Social Science, Head of the Center for Research of Intersubjectivity and Interpersonal Communication at the European Humanities University (Vilnius, Lithuania), editor-in-chief of the Journal for Philosophy and Cultural Studies TOPOS.