A Feminist Framework for Understanding of the Role of Women in the Belarusian Revolution: Domestic Violence, Care, and Sisterhood 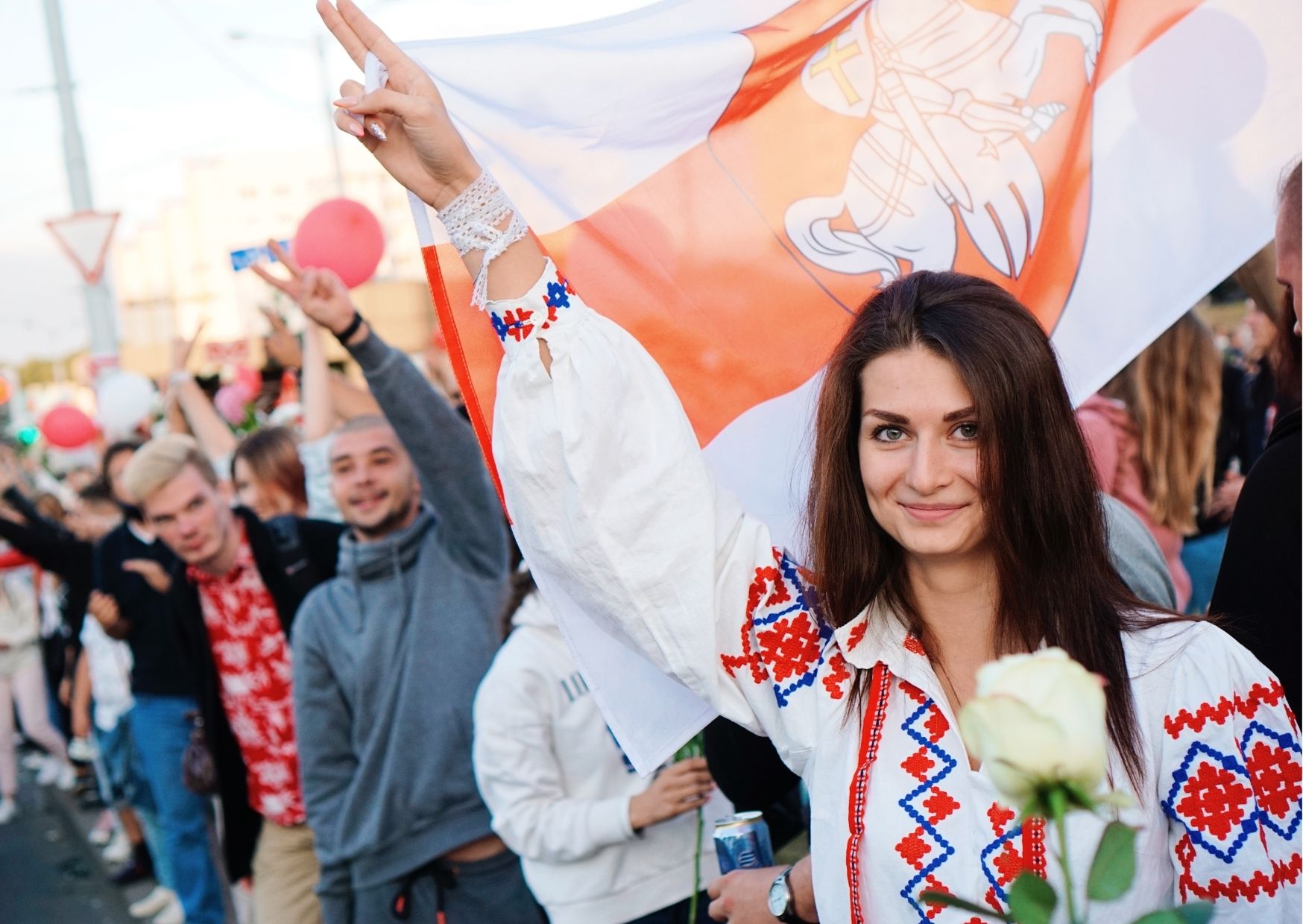 For the anniversary of the Belarusian revolution, Belarusian poet Hanna Komar wrote the article  “Sisterhood Behind Bars: Female Solidarity in Belarusian Prisons” for Eurozine, based on interviews with women who were political prisoners.

I hope this example of solidarity can be shared. I look forward to seeing it seep through into communities and entire countries filling people with a love and care stronger than any prison wall. I hope it will inspire millions to become better versions of themselves. I hope it might change the world."

Violence and patriarchal power were and remain the main unifying strand in the discourse of the Belarusian protests and Revolution-in-progress. This is why I believe Belarusian society over the last year began to employ a discourse originally championed by feminist activists in Belarus.

“If he hits, he’ll get locked up” (бьет, значит сядет) – once a feminist slogan in Belarus – could now be heard on the streets and seen on signs of protest. In this sense, the “Revolution-with-a-womanly-face” (the title of my most recent book published in German) marks a shift in how our society at large understands itself. This new understanding is in fact incompatible with that of Lukashenka and his military entourage.

Lukashenka’s pre-election exclamation “I will not give up my most beloved” (любимую не отдают) motivated Belarusians to conceptualize violence not only in terms of violence committed by the state in general, but also to understand group-based and domestic violence specifically as two crucial manifestations of state-wide violence.

All of these discussions about such violence (domestic violence in particular) demand that we form a new understanding about the relationship between the public and private spheres, as well as of the gendered roles of men and women in our society. As Belarusian political philosopher Pavel Barkoŭski recently writes:

Domestic violence and child abuse are not the private business of a given household, but rather a socially dangerous phenomenon. The alcoholic father who beats his family is subject to legal censure, while ​​society at large comes to the defense of those whose rights have been violated.

Some experts and journalists have already written about the genesis of a true political sphere and the resultant self-consciousness of Belarusian citizens as predicated on the opposition to both the Father-as-such and the domestic tyranny of Aliaksandr Lukashenka.

In this sense, the concepts of sisterhood and care could be understood as normative alternatives to the various forms of violence I described earlier. Sisterhood, a concept I have been working on through the prism of my experience in Belarusian prison, refers above all to a specific form of solidarity, namely mutual aid and empathy. In the words of the gender scholars Elena Mintschenja and Nadeschda Husakouskaja:

This experience when a society, usually dispersed and divided, starts functioning as a whole is precisely the change that has already happened. Not in terms of “the awakening of the nation”, but in terms of the people coming together in times of great uncertainty, horrendous state violence, and the sense of urgency, solidarity and mutual aid.

Second, sisterhood as a form of mutual aid refers to our vulnerable bodies and lived experiences, all of which are simultaneously tied to our shared actions. As Judith Butler suggests:

Vulnerability is neither fully passive, nor fully active, but operates in a middle region, a constituent feature of a human animal both affected and acting. I am thus led to think about those practices of deliberate exposure to police or military violence in which bodies, put on the line, either receive blows or seek to stop violence as living blockades or barriers. In such practices of nonviolent resistance, we can come to understand bodily vulnerability as something that is actually marshaled or mobilized for the purposes of resistance. Of course, such a claim is controversial, since these practices can seem allied with self-distraction, but what interests me are those forms of asserting existence, claiming the right to public space, equality, and opposing violent police, security, and military actions. (26-27)

This form of active vulnerability also ties into two more concepts crucial to my work: empathy and horizontality. In contrast to brotherhood, sisterhood does not divide the world into the public and private sphere in which men are the public rational actors and women are the empathic bodies of reproduction. Sisterhood refers instead to a new form of collectivity, where inclusiveness plays a decisive role and which exists beyond the borders between the public and private. Following this, female activism and solidarity in Belarus has stimulated the activity and solidarity of other vulnerable social groups, such as elderly people and people with disabilities.

We can nevertheless trace strategies of sisterhood in different self-organized structures, ranging from crowdfunding platforms, through funds of support to different Telegram chats, to neighborhoods, professional, student, and other communities offering psychological, legal and other forms of aid. The main value of these self-organized initiatives is, in the words of Belarusian scholars Antonina Stebur and Alexej Talstoŭ:

In a political sense, they become revolutionary new ways of organizing society. They cast doubt on any hierarchical or authoritarian structures, as well as heroic figures, stripping the monopoly of control of various spheres of life away from the state.
An important trait of these systems is their total lack of competition. Solidarity and cooperation within said structures provide a much more productive and effective principle of interaction.

If sisterhood allows us to tie together vulnerability and activism and to understand vulnerability as both exposure to violence and a shared agentic act standing against it, then care is a complex of practices that allows a new understanding of social structures and processes. With this in mind, Spanish feminists propose differentiate between the traditional strike and the care strike:

Traditionally, the strike is understood as a suspension of work in order to form a class, to strengthen the unions and to fight for better working conditions. The care-strike, on the other hand, is not about interrupting care-work, but rather in many places, in many relationships and on days like March 8th, together with many people, to make the extensive dependence on care visible, to give care activities in abundance, to create new caring relationships and experiment with them. (194)

On the one hand, if there is not enough solidarity and mutual trust in society, the traditional strike is rather impossible, which was the exact situation in Belarus. The care-strike then could serve as an instrument and infrastructure for shaping a new horizontal society. In this sense, the care-community “strives to the creation of a concrete and situated connection, based on a shared experience of mutual dependence, as an awareness of vulnerability, but also awareness of collective potency and creativity."

This on the other hand means that such care-strategies can be understood as strategies of peaceful resistance. This is particularly the case under the condition of state terror, which we see today in Belarus. The care-infrastructure of mutual aid and caring masculinity can be considered two additional important dimensions, both consequences of the care-strike and care-community.

To conclude, we must begin to attempt to forge an understanding of caring practices and subjectivity that surpasses the dichotomy between sacrifice and heroism. Both sacrifice and heroism are usually interpreted as two opposing strategies of resistance and protest but are themselves ripe with problems. Sacrifice as the core principle of protest and resistance can serve to undermine collective action; moreover, vulnerability does not lead to activism. Heroism, however, can produce new hierarchies and violence in so far as not every woman or man can become a hero. It requires its own form of “superpower.” In this sense, power within protest can turn into violence, which does not suppose a critical and horizontal relation; rather, it demands admiration, subordination, and imitation.

Caring strategies in contrast include both elements of heroism and sacrifice, but, as Andrej Vozyanov suggests, are possible only through attention, responsibility and the accounting of needs, in other words active and collaborative practices. Care also serves as the fundamental precondition for vulnerability to be active and heroism to be sensitive rather than destruction. That is to say, care creates the conditions for the development of a new caring masculinity and proposes new tools engendering citizens to strike, practice resistance and live together in a community.

Edited by David Kurkovskiy for IWM Chronicle from Belarus.

Olga Shparaga is a Philosopher; Scholar of the Martin Roth Initiative, from January 1, 2022 Fellow at the Wissenschaftskolleg Berlin and lecturer at the ECLAB (European College of Liberal Arts in Belarus).

David Kurkovskiy is a PhD student in Slavic Languages and Literatures and Jewish Studies at UC Berkeley, focusing on Belarusian-Ruthenian philology since the Early Modern era, as well as on Belarusian-Jewish political and literary contacts in the early 20th century. He works chiefly between six languages: Belarusian, Lithuanian, Polish, Russian, Ukrainian and Yiddish.