A Landmine Detonates in the Woods 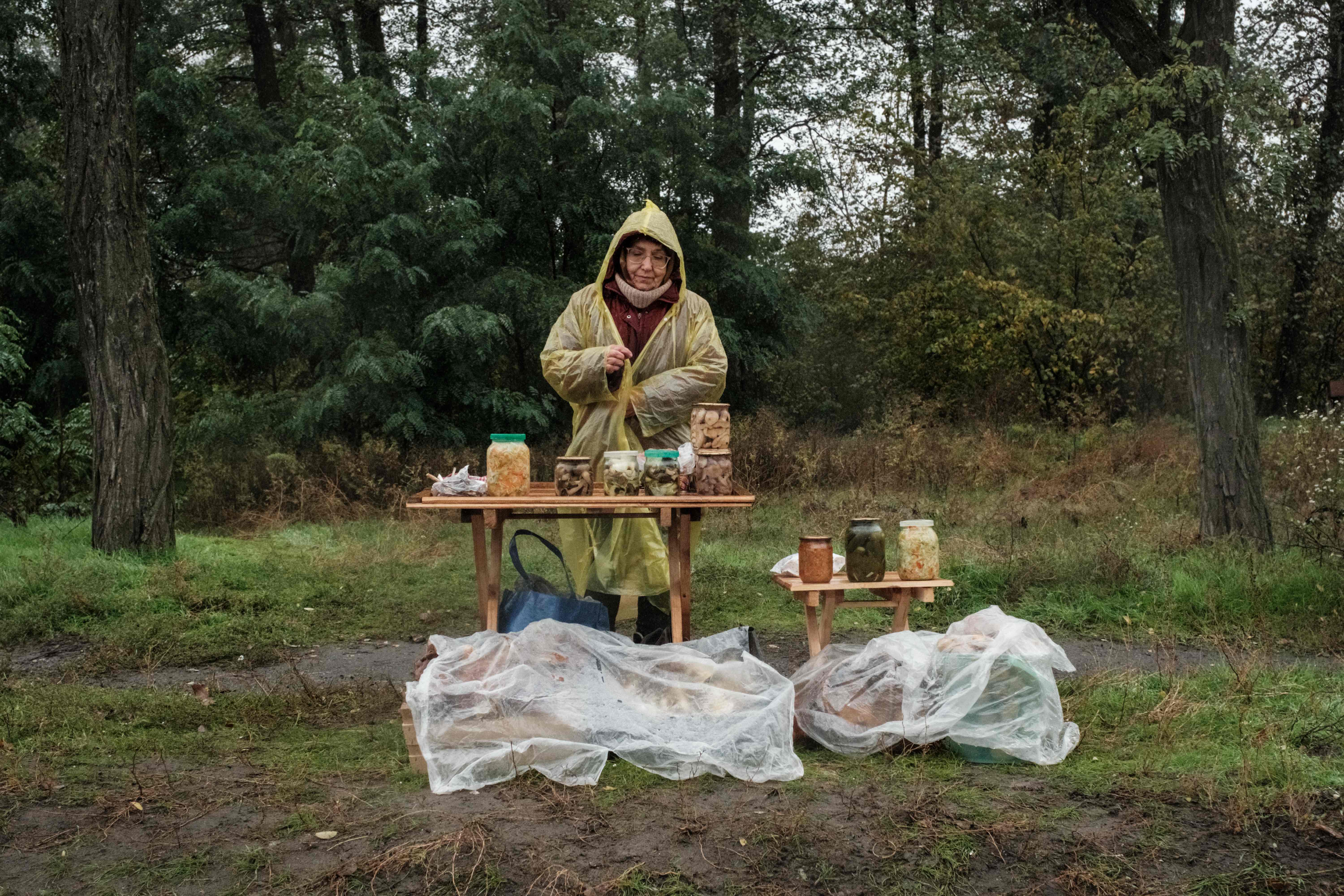 Nadezhda, 62, sells fresh and preserved mushrooms at a roadside as she and her son collect them in the woods carefully not stepping on mines in Izyum, a recently recaptured town in the Kharkiv region, on October 10, 2022, amid the Russian invasion of Ukraine. Photo: YASUYOSHI CHIBA / AFP / picturedesk.com

Russia’s war in Ukraine does not only kill thousands of people, it also profoundly changes relations between people and environments as many places have been turned dangerous and life-threatening for humans and other species.

While sitting at a hairdresser’s in Kyiv in early October, I overheard two women talking about mushroom picking, a popular activity among Kyivites. Yet, instead of expected stories about their finds and forest trips, they talked about two men who went searching for mushrooms and died stepping on a land mine.

Before the February escalation of Russia’s war on Ukraine to a full-scale invasion, I was interested in conducting research in mushroom-picking cultures of Ukraine. Mushroom picking is an immensely popular activity in the country, where people of all ages and professions explore the woods for edible fungi. There are long genealogies of local forms of knowledge surrounding this foraging activity. I grew up in the steppes of Ukraine, without any knowledge of mushrooms or the woods passed on to me by my parents, so I was looking forward to developing this project and learning about forest environments guided by mushroom pickers from different regions. After the escalation of Russia’s war on Ukraine, these research ideas are not possible to implement.

Mushroom season is in full swing at the moment, and stories like the one I overheard in Kyiv populate Ukrainian news: four mushroom pickers died in Chernihiv oblast, two people got injured in two different places in Kharkiv oblast, two people got hurt in Zaporizhzhia oblast. Thinking about these stories makes me painfully aware of the extent to which people in Ukraine have become deprived of access to different environments—forests and seas, fields and steppes—and the extent to which these environments have now become places of extreme danger. By access I do not just mean the privileged access of a tourist going on a hike. Forests and seas have long been vital for livelihoods in Ukraine, where people often depend on fishing and foraging for living. These stories also make me painfully aware of the harm done to environments and their nonhuman inhabitants all over the country. Birds’ routes and nesting conditions have been disrupted. Animals die from shelling and starvation. Forests are being destroyed by fires. All forms of war violence, including land mines do not kill only human beings. Land mines, for example, can be detonated by nonhuman animals or tree roots. Because of this, they cause loss of biodiversity, and even the process of demining results in the destruction of plants and other life.

Already prior to the February escalation, Ukraine had some of the highest numbers of deaths from land mines in the world. According to estimates, before 2022, 8 percent of Ukrainian territory was mined. There are no numbers for the current situation, and it is scary to imagine the real extent of the problem. Russia uses antipersonnel land mines, which are triggered when stepped over. The 1997 Mine Ban Treaty prohibits their use but, unlike Ukraine, Russia did not sign it.

When the military fighting finally stops, the land mines will remain. They will continue killing, injuring, and contaminating for years. Ukraine’s forests, steppes, and seas will continue to be places of heightened risk and potential death. Many oblasts have already prohibited the access to forests. If the war stops tomorrow, Ukraine will not be fully demined in one week or two, or not even in a year. What does this mean for people’s relations with environments? What does it mean for their perception of spaces around them? What does it mean for the lives of ecosystems?

Mushroom picking and foraging play an important role in preserving local knowledge about ecosystems as well as systems of knowledge-exchange. In Ukraine, environmental knowledge about forests and foraging practices has been shared informally via familial and community networks. One usually learns about different types of fungi by going to the woods together with a person already experienced in mushroom picking. This local knowledge and understanding of ecosystems are especially important in a time of climate emergency and increasing alienation of humans from more-than-human worlds. Mushroom picking requires being attentive to weather changes, to light and humidity, and to relations between different species—for example, between aspen trees and yellow swamp russula mushrooms. It allows for a deeper understanding of ecosystems as well as of the different beings and elements that constitute them. For many people in Ukraine, the war took away the possibility to engage with the woods and other ecosystems through mushroom picking and other practices, therefore dramatically changing their relations to environments. The war has also displaced and fragmented families from every corner of Ukraine, disrupting networks that would allow people to pass on knowledge about forests, mushroom picking, and foraging further. While the war continues, and even after it is over, these networks and the knowledge they pass on will never be fully restored.

Ukrainian lore links the seeming abundance of mushrooms in the woods this year with the escalation of the war—according to a myth, an abundance of mushrooms is an ominous sign of a war. “When there are many mushrooms, people will be dying.” (Коли гриби вродять, тоді на людей помір буває); “Many mushrooms—many coffins” (Багато грибів, багато гробів); “Mushrooms bring coffins” (Гриби—на гроби)—these are just some sayings that associate mushrooms with the war. Some resources point out that this myth originated after the unusual abundance of mushrooms before the outbreak of the Second World War. I cannot confirm or deny the extraordinary plenitude of mushrooms in Ukraine this year. Yet, when imagining this possible abundance, I cannot stop thinking about mushroom pickers who are not there to forage, whether because going to a forest is prohibited or because they have been killed, injured, displaced, or gone to fight.

Mushrooms often carry an association with death even during the times of peace—they pose the danger of lethal poisoning. These days the forests they grow in carry even more deaths within them, and not only in the form of land mines. I will never be able to unsee images of the forest near Izyum where mass graves were discovered after Ukrainian forces de-occupied the city. One of the sites had more than 440 bodies of people killed by the Russian military.

There is a myriad of deaths in the Ukrainian woods these days. There is a dying of more-than-human worlds, of biotopes, of relations that form them, and of inhabitants that populate ecosystems. Many of these deaths hardly make the news. Most are not registered, and cannot be registered as we cannot access the places and as more-than-human deaths are not counted. Many deaths are yet to come even after the end of the war, when another land mine detonates somewhere deep in the woods, or when metals and toxins from weapons poison the water. These deaths also mean that relations and understandings of environments in Ukraine are changing, that the spaces we have known are not the same. They are never the same, of course, especially with the climate emergency and the sixth mass extinction—these spaces only exist in perpetual reassembling of relations. Yet, the war exacerbates the rupture of relations, cutting right through more-than-human worlds. Having survived the world’s biggest nuclear disaster at Chornobyl in 1986, Ukraine knows how to “get on with the art of living,” as Kate Brown reminds us in Manual for Survival. Yet, we shall never forget against what terror this living takes place, when—extending Adolfo Albán Achinte’s notion of re-existence to include more-than-human communities—we can only see life in resistance to ongoing violence and erasure.

***
I spent only ten days in Kyiv this autumn. When people ask me what I thought of everyday life in the capital of a country under attack, I struggle to find a good answer, but perhaps the conversation between two women I overheard at a hairdresser’s is a good story to share. Their chat about mushroom picking could be an insignificant detail of an ordinary Wednesday afternoon—life does go on in Kyiv. Yet the land mine detonates and makes the conversation explode in violent pieces when you least expect it. Stories of (the impossibility of) mushroom picking poignantly remind me of the extent to which Ukrainian realities have been invaded and destroyed, where the most mundane things have been devastated and crushed. These days everything is steeped in violence and death, even ordinary conversations.

Darya Tsymbalyuk is a Max Hayward Visiting Fellow at St Antony’s College, University of Oxford. She was an IWM visiting fellow in 2022.