The Strange Case of Varosha in Cyprus 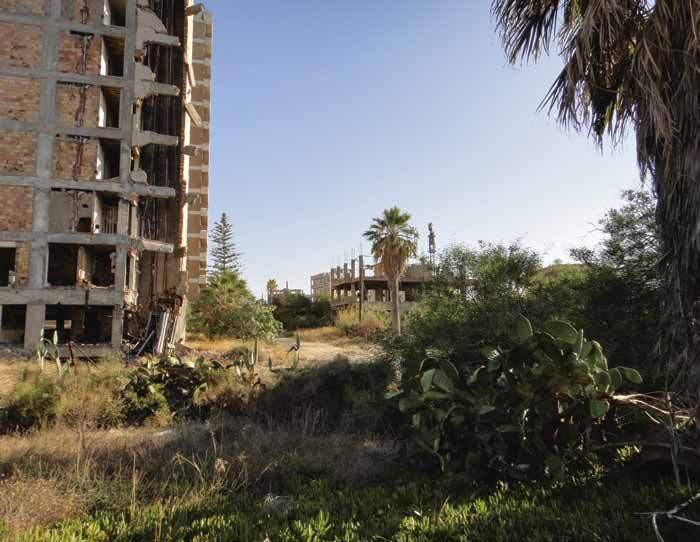 Forever “ghost town” or the “stolen” riviera of the Eastern Mediterranean? Varosha, on the eastern coast of Cyprus, has been shut off since the 1970s due to the Turkish armed forces occupying the town as well as almost 30% of the island. It has been described in many ways: ghost town, no-man’s land, military restricted zone, etc. Today, Varosha is being “restored to its former state.” But for whom and at what cost?

Over the past decades, the coastline of Turkish-occupied northern Cyprus has undergone exponential development in tourism due to mostly Turkish investment. However, the concreting over of the land along the beaches of almost all of the northern shores of the island—enclosing the commons with resorts, casinos, and so on—does not conceal the stark reality that such rapid development is materially unviable, with insufficient transportation, communication, and other infrastructural necessities. But there has been another type of enclosure happening on the island since its division. The military enclosures of the Buffer Zone patrolled by the UN peacekeeping forces, Akrotiri and Dhekelia held by the British as sovereign military bases, and Varosha occupied by the Turkish army render the notion of sovereignty even more contested in Cyprus.

Perhaps Varosha (Maraş) is a case where both military and capitalist enclosures goes hand in-hand. While northern Cyprus came to have fancy hotels and luxury resorts, Varosha remained an occupied ghost town where Turkish military barracks have stood since 1974. Once the riviera—some even said the Las Vegas—of the Eastern Mediterranean, where European elites spent their holidays prior to the partition of the island, Varosha was left enclosed, undeveloped, derelict, and heavily militarized.

The summer of 1974 was a defining moment for Cyprus with the Turkish military invading parts of the island and transforming the fate of all Cypriot communities. The ethnic strife between Greek Cypriots and Turkish Cypriots ended as Turkey intervened and then came the never-ending negotiations that have morphed into a “no solution” solution; that is, maintaining the status quo seems to be the most preferable option for both sides. Varosha stood in the middle of this political impasse. The town rotted between Famagusta—the third-largest city in northern Cyprus—and Deryneia to the south. In this noman’s land and military zone, over the years, the windows and plaster fell off of old hotels, dust collected in luxury car dealerships, and people’s belongings remained untouched (after heavy looting by the military).

The derelict town still had life, however. Small bushes along the beaches and once manicured lawns of hotels became festooned with wild shrubs. The arid landscape was colonized by Turkey’s military personnel but also by rows of cacti and other flora, especially babutsa, a cactus species that sprouts a sweet nectar and fruit. An entire ecosystem out of violence, trauma, and dilapidation sprouted; species competed with each other. Babutsa trees were later hit by a virus that to this day spreads to the gardens of Famagusta households as well. The networks of military checkpoints, the almost collapsing buildings, and the flora and fauna emerging from a seemingly lifeless space created a real-estate crisis for the former owners of property in Varosha and also a curiosity for tourists. “Dark” touristic endeavors like trying to swim up to the ghost town or taking photographs of its buildings were met with police fines and military whistles to scare off whoever got too curious.

The veil was lifted off the deteriorating and life-giving conditions of Varosha when a stretch of beach of a few hundred meters was opened to the “public” in 2017. Until then not much more than a strip of restricted military zone on maps that lay on peace negotiation tables in Switzerland, Varosha could now be seen up close. However, the Turkish military only allowed through the checkpoint of the town people with citizenship of Turkey or of the de facto Turkish Republic of Northern Cyprus (TRNC). The facilities run by the Famagusta municipality, such as renting out chaises longues and parasols, were exclusively for Turkish and Turkish Cypriot beachgoers.

Following the controversial opening of the beach, Famagusta-based civil society groups, leftist political advocacy organizations from the TRNC de facto capital Nicosia, and others declared a boycott. They issued statements to the effect that the military occupation and Varosha’s hostage status was “a shame for humanity.” Some likened it to a “white beach” in apartheid South Africa, others protested against whoever set foot there.

The “opening” of Varosha reached a new level in 2019 when Ersin Tatar, then prime minister of the TRNC, stated that it would be made more accessible in stages over the next years. Declaring that an investment of 10 billion euros was needed for the ghost town to be repopulated, revived, and “returned to its former state,” the TRNC authorities decided to carry out an inventory of moveable and immoveable property in Varosha along with a scientific study of the state it is in.

The “opening” progressed in 2020 when Tatar announced further plans for Varosha’s development and Turkey’s President Recep Tayyip Erdoğan then declared the town to be TRNC territory. In July 2021, Erdoğan announced that 3.5% of Varosha would be open to the public as a pilot project and declared that life there would be restored “for the good of everyone on the island.”Entering from the military checkpoint in Famagusta, sightseers can now take photos and stroll through the streets, with caution signs all around them as the buildings could collapse at any moment. Famagustans who do not have any qualms or political opposition to this recent development use daily the once abandoned streets for morning walks and biking exercises.

Once again, Varosha finds itself part of a puzzle that is yet to be solved. Its status as a military zone prevented Greek Cypriot and other international property owners from contesting the occupation and claiming compensation. The town’s “opening” for investment and development is now tied up with the decades-long dilemma between a federal state or a two-state solution for Cyprus. Erdoğan and his ally Tatar, recently elected TRNC president, are pushing even further for a two-state solution and international recognition of the TRNC as a legitimate state. Varosha would then be revived as a tourist hub. The promises of compensation and resolution of the property claims over the town seem to be just another one in the list of promises and commitments that Turkey did not uphold or reinterpreted to its own benefit.

The decision of the TRNC to “open” Varosha is not just illegal, it is also against the UN Security Council decisions regarding the town. Erdoğan’s speeches on resolving the property issue in exchange for recognition by Greek Cypriots of the TRNC as a state makes even clearer the carrot-and-stick approach used by Turkey.

Turkey’s hegemony over northern Cyprus has long been one of domination and intimidation; now under Erdoğan, it is one of neo-imperialism and neoliberal authoritarianism. As the military occupation continues and the commons like coastline get robbed, new relations and networks emerge—human and non-human. Erdoğan’s oligarchs are now dividing up Varosha to develop new hotels, resorts, and casinos. Once a far-fetched prediction or an unfounded rumor, Turkish capital investment for Varosha is finally becoming real. Whether the communities of northern and southern Cyprus—or the international community—will tolerate yet another looting of the town at the hands of the Turkish state remains to be seen.

Ezgican Özdemir is PhD candidate at the Department of Sociology and Social Anthropology, Central European University, Vienna, Austria. From January to May 2021, she was CEU Junior Visiting Fellow at the IWM.