The Dangers of the Everyday 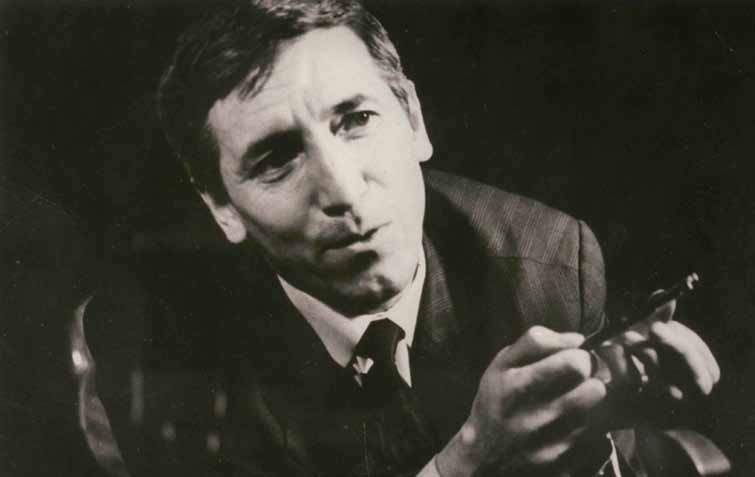 He was one of the most illustrious and beloved Bulgarian writers of the communist era. He decided to leave everything behind to pursue his dream of being somebody else, somebody better, somebody free. He failed. He succeeded. He was murdered because of his dream. This is the story of Georgi Markov.

On September 7, 1978, while crossing London’s Waterloo Bridge on his way to work at the BBC, the Bulgarian writer and journalist Georgi Markov was shot in the right leg with a 1.52-millimiter poisonous pellet—as tiny as the tip of a ballpoint pen—by an undercover agent of Bulgaria’s intelligence services. He felt a slight sting and did not think much of it, but that evening he began to show symptoms of illness and his condition quickly deteriorated. Four days later, in spite of the efforts of doctors, Markov’s heart went into cardiac arrest. He was forty-nine years old.

Markov’s death became one of the most notorious assassinations of that era, a James Bond–style operation that the press dubbed “the umbrella murder” (it was assumed at the time that the pellet had been shot via a modified umbrella). It made headlines all over the world and remained in the news for months. Investigators and journalists alike began working to solve the mystery of the crime. Why would anybody kill a fairly unknown émigré in such bizarre fashion? What had he done to deserve death? Who was Georgi Markov?

Before he left Bulgaria for good in the summer of 1969, Markov had been one of its most famous and celebrated writers, the darling of readers and even some party officials. His fiction received major literary prizes and was adapted into movies. His plays were staged in many of the big theaters in the capital, Sofia. He cowrote the script of the most popular Bulgarian TV drama series of that time, At Every Kilometer. For all of this, he was, of course, handsomely rewarded. Something of a bon vivant, he drove a silver BMW, took part in high-stakes illegal poker games, attended parties and lavish dinners with politicians, and even accompanied the country’s leader and de facto dictator, Todor Zhivkov, on nature hikes.

At the same time, Markov never lost sight of the numerous compromises he had to make as an officially recognized artist and of the self-censorship involved. “That was precisely the purpose behind the sweet life offered us—to stop us writing,” he wrote in one of his essays.

Markov’s decision to abandon Bulgaria and throw away his entire career—fame, money, and privileges—came about slowly, a product of his growing disgust with his participation in the system and his frustration with the country’s increasingly reactionary politics after the crushing of the Prague Spring in 1968. He also had vague hopes of making it as an artist abroad, feeling that the provincial atmosphere in Sofia was much too limiting for his talent and abilities.

“I am indeed happy with the path I have chosen, however costly it may be,” Markov wrote to his Bulgarian ex-wife, Zdravka Lekova, in a letter from London. “I have not regretted my actions for a second and I do not miss the pseudoliterary life in Bulgaria, and my false happiness as a literary parvenu. The coming days may be difficult and impoverished, then again I might be lucky, but the most important thing for me is that I will write the works I want to write without taking anyone’s opinion into account.”

Nothing really seemed to work at first. When Markov moved to London in the summer of 1970, after a brief stint in Italy, he had no money and no connections. He rented two rooms of a house in a dingy part of southwest London and, with no steady job and no knowledge of English at first, had to rely on the generosity of a few acquaintances. Unlike literary émigrés from the Soviet Union, Poland, Hungary, or Czechoslovakia, who enjoyed at least some public attention in the West and occasionally had access to university positions and translators, Bulgarians had practically no support networks. Of all the Soviet bloc countries, Bulgaria—the closest satellite of the Soviet Union—was the least known and considered the least interesting. Markov stood little chance in his newly adopted country.

Yet he persevered. He quickly learned the language and eventually found a job as newscaster at the BBC’s Bulgarian service. Soon, he also began to contribute regular cultural and political pieces on Bulgaria—increasingly critical in tone— for Germany’s Deutsche Welle radio, broadcasting on short wavelengths to audiences behind the Iron Curtain. It was Markov’s series of personal narrative essays for the U.S.-sponsored Radio Free Europe, In Absentia Reports About Bulgaria, however, that put him in the line of fire of the country’s State Security intelligence service and turned him into one of the most reviled and dangerous enemies of the regime.

With channels for free communication with the countries of the Soviet Bloc effectively closed, radio was often the easiest and most reliable means for delivering information to citizens there. It was the reason communist governments viewed all radio broadcasts coming from the West as conduits of “ideological sabotage”—one of the worst possible crimes in their eyes—and relentlessly jammed their frequencies. In spite of this, millions of people found ingenious ways to tune in.

Markov’s indefatigable radio work was seen as particularly incendiary. His In Absentia ran weekly from November 1975 to June 1978, for a total of 137 installments (two of which have been translated in full here), and quickly gained popularity in Bulgaria. Eloquent and engaging, written in the best tradition of narrative journalism, his essays offered an eclectic mix of personal memoir and overheard stories, vivid human portraits and entertaining anecdotes, popular history, and philosophical analysis. As a former insider, he openly acknowledged his once privileged role in the system and went on to expose the secret lives of high officials and party functionaries, intellectuals, and artists. However, he never forgot the people from “the lower depths,” those on the margins, to whom he devoted some of his most colorful pages: factory workers and university students, prostitutes, and tramps. Politics aside, he often dealt in his writing with the everyday. He tackled such diverse topics as education, illness, sex, tourism, shopping, and the fetishism for Western goods. In effect, Markov produced what was the most candid, incisive, and comprehensive portrait of Bulgaria under communist rule from the end of the Second World War until the late 1960s.

It may seem a little strange today, even unbelievable, that a person could be killed for telling such ordinary stories, that a fairly stable political system would decide to employ its entire repressive apparatus and human and financial resources in order to eliminate one voice talking over the radio. Markov described neither the violence of the concentration camps nor any murderous spree. But by exposing the regime’s ideological fraudulence and moral hypocrisy, by showing its pedestrian, everyday character, its banality of evil, he undermined the grand project of mythmaking that every political system relies on for its legitimacy and survival.

Despite the notoriety of “the umbrella murder,” or rather because of it, Markov’s life and work remain largely unknown. Whenever his name crops up, it is only in relation to his final moments, the spy story, the cloak-and-dagger assassination. All the documentary movies and the vast majority of studies focus on the sensationalism of his death and its place in the political context of the times. “The umbrella” seems to have been an effective ruse for it managed to conceal the victim. It has created a cultural cliché, which has unfortunately overshadowed the complexity and contradictions of Markov’s character and his times. But it is in the accidental interstices of history, in the messiness of personal emotions and motivations, in the twists and turns of the everyday (which Markov himself was so interested in) where I believe we could discover a deeper kind of truth, more subjective and ambiguous perhaps, but somehow more authentic. To understand who Georgi Markov was, and what the Cold War meant, we have to look first into the very warm human heart.

Dimiter Kenarov is a freelance journalist, poet, literary critic, and translator. He is the 2021 Milena Jesenská Fellow at the IWM.