A State in Disarray 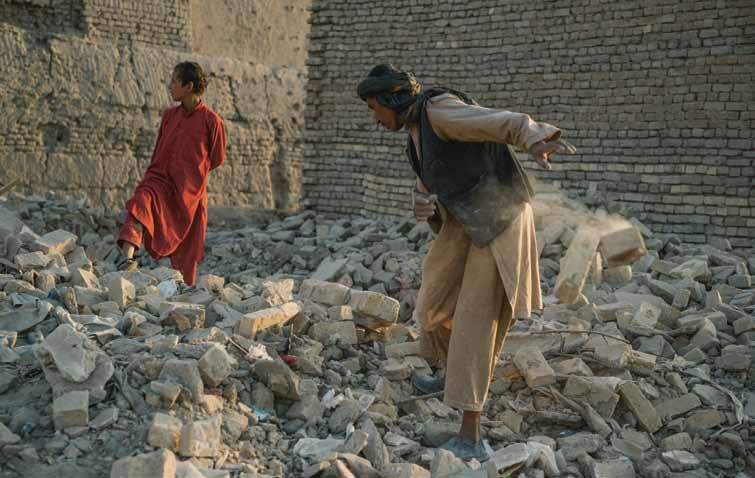 A man clears away the remains of a building in Alam Khail, a village in north Afghanistan, September 2021. Photo: Paweł Pieniążek

After seizing power, the Taliban are struggling to create functioning public institutions and to prevent even deeper financial crisis than what Afghanistan faced before. That increasingly makes Afghans think about leaving the country.

The village seems busy. It is crossed by a road that connects Balkh and Jowzjan, two of Afghanistan’s northern provinces. Numerous stores are open along the road as well as welding shops and vulcanizers. Around them people gather or they just walk about. If ruins were not rising behind the roadside stores, it would be hard to guess that just a few weeks before Alam Khail was the frontline and that for years it had no inhabitants. In recent years, the village was fought over by Taliban and government troops. The current activity feels like a manifestation of life after the fighting forcibly pushed everydayness out of there.

“There was such a war here that a bird could not fly or a dog could not walk through,” says forty-two year-old welder Rahmatullah. “It is impossible to find a house that does not bear traces of fighting.”

Until recently, it seemed that the war was gaining steam. Since the United States and its allies began withdrawing from Afghanistan in May, the fighting had intensified. Rahmatullah, who looked for a shelter in a town twenty kilometers away (enough to enjoy relative peace), had resigned himself to never seeing home again. Therefore, the end of the fighting in August was completely unexpected.

“We are still rejoicing as if it were a holiday,” says Rahmatullah. “I hope the mujahideen will be able to keep the peace.” By “mujahideen” he means the Taliban who since mid-August again rule the country.

The villagers waste no time. By the side of the road, men are working up a sweat. They are clearing away debris, laying foundations, or digging new ones. Wheelbarrows move back and forth. Others tidy up buildings whose walls have been torn apart by shells. Numerous vendors are on the lookout for customers. Rahmatullah has already rebuilt a house that was slightly damaged during the conflict.

The residents of Alam Khail are grateful for peace but they also feel a taste of bitterness. They fear that this is not the end of their problems. Although the fighting has stopped, the economy has taken a dive due to the sudden change of regime and the isolation of the Taliban by the international community.

This is a common problem facing Afghans. While the country has long been in a deep economic crisis, unemployment and poverty have soared, and corruption and nepotism are rife, it now faces a new challenge: preventing complete collapse.

Money did not evaporate in Alam Khail alone. The treasuries of many banks have been almost completely emptied. In order not to lose liquidity, they introduced a weekly withdrawal limit after Afghans rushed for their money en masse in August when the Taliban launched their victorious offensive. Currently, one person can withdraw 400 dollars or 30,000 afghanis (330 dollars) from their account. There are queues in front of the banks that are still open.

For an average Afghan such a weekly limit is a high amount. It is enough to provide basic products for a family for weeks. However, things are different for entrepreneurs whose funds have been frozen, completely blocking their ability to operate and thus threatening to collapse the economy.

“In one month alone, the state has lost billions of afghanis,” says a high-ranking official at the Central Bank of Afghanistan, who introduces himself as Sultanzai. “The authorities are now spending last year’s revenues, but what will they do with next year’s budget?”

He asks not to mention his real name for security reasons.

According to the World Bank, 40% of the Afghan budget was funded by foreign aid money. Now virtually all this support has been stopped. In addition, assets of the central bank worth about 9.5 billion dollars located abroad, much of it in the United States, have been frozen. As the case of Iran shows, such funds can be locked up for decades.

Business taxes are not being collected, regardless of the size of the company; no one at home or from abroad is investing funds because the situation is precarious. For the same reason, domestic demand is weakening, made even more fragile by the non-payment of salaries of many workers and by rising unemployment. Finally, the transport of goods across borders has been significantly reduced, and thus customs revenues have shrunk. Most of the state’s revenue now comes from income tax on public-sector workers, who still get paid regularly.

While economic issues will affect Afghans the most, as Sultanzai points out, the problem is broader. “The system collapsed and there has been no reset,” he says.

As an example, he gives the central bank. Since the change of regime, the institution has been operating at half-speed. Its board and the supreme council are now made up of people Sultanzai describes as unqualified and inexperienced. Fortunately, he adds, they make at least some of their decisions in consultation with long-time employees.

“The bank’s management and board are people who have no experience in banking, only in fighting,” Sultanzai says. “They cannot read nor write; they only know the language of violence. What positive can we expect from them?”

Women, who made up about a fifth of the bank’s staff, were told not to come to work again. Some of them were department heads. In addition, between 10% and 20% of the staff left the country or stopped showing up for work. According to Sultanzai, the rest stayed not because they did not want to leave Afghanistan, they just did not have the opportunity to do so.

“If they do not keep our salaries at the current level, I will be the first person to leave. Many of us think that. And they will have to cut them because there will be no money,” he says.

The lack of human resources seems to be the biggest problem Afghanistan now faces under the Taliban regime. The new authorities seem to be aware of this. They are inviting former employees of the state to return to work. Even in the prisons where the Taliban faced atrocities, former guards are also supposed to work. The militants now working on the borders are not very good at passport control, so they do it the way they think it should look. Suddenly the Taliban find themselves in a world they have not known before. Now they not only have to fight for the cause but keep the whole country in line. It is a difficult and thankless job. Especially when you drove most of the best educated people to leave the country.

Waiting for a chance

If the Taliban fail to rebuild the state, Afghanistan will face an even greater crisis. The lack of prospects is causing more and more Afghans to think about leaving. People have been emigrating in large numbers for a long time, but now in places like Kabul it is hard to find ones who are not preparing to leave.

Nadjmuddin Azimi, 26, sells at a women’s clothing store located in one of the malls in the capital Kabul. Because of the standoff and uncertain political situation, the owner is selling clothes below the purchase price, but even such offers do not attract buyers. According to Azimi, until the change of regime, the store was bringing in good income. Every day up to fifty people bought things there. Now, a day can be considered successful if five people shop there. But there are days when no one comes.

Nadjmuddin understands where all this is going. If there is no turnover, the store will eventually collapse and he will lose his job. That is why he comes home worried. He shares with his wife his dilemmas about the future of the store, the poor income, and the bills that need to be paid. He sees no better future for himself and his family than to go abroad.

“Everywhere is better than Afghanistan. That is why I would not be picky, I will be happy to go even to any of the neighboring countries,” says Azimi.

Paweł Pieniążek is a journalist, regular contributor to the Polish weekly Tygodnik Powszechny, and Milena Jesenská Fellow at Institute for Human Sciences (IWM) in Vienna. In 2019, he was awarded the prestigious MediaTory prize in Polish journalism for covering the war in Syria.