Native Americans have long been beloved in Hungary, where ‘Indians’ stand for what is real, endangered, and exceptional. Viktor Orbán has used the trope to channel demographic anxiety and bolster his anti-migrant rhetoric, but it could also spell trouble for his politics of fear. 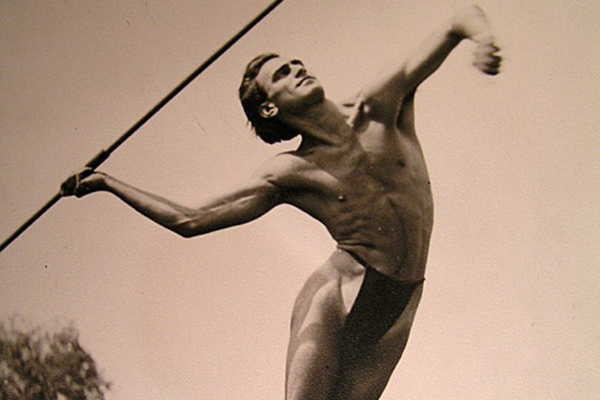 When he was younger, Hungary’s prime minister Viktor Orbán famously feathered his speeches with pithy and satirical references to the wisdom of the ‘Dakota Indians’: ‘If you find yourself sitting on a dead horse, get off,’ or ‘Don’t bother blowing into a balloon with holes in it.’ Nowadays, Orbán’s ‘Indians’ are no longer summoned to lighten the mood, but rather to darken it, building on a romantic vision of the noble few fighting a desperate, perhaps even futile battle for survival. In a speech from July 2016, during which he endorsed Donald Trump, Orbán told his audience, ‘I can even understand the Americans’ positive point of view on migration because that is how the United States came to be, but they have to be able to see that in this situation we are the Indians.’

East-Central Europeans’ romance with Native Americans has a deep root in German idealism filtered through American transcendentalism. In late nineteenth-century Germany, Karl May became famous for his vivid popular novels featuring the Apache character Winnetou, although he conceived most of them without having visited North America. His works were translated and eagerly read in Polish, Czech, Hungarian, Romanian, and Serbian/Croatian. Two statues of Indian warriors facing off near the shore of Lake Michigan in Chicago – The Bowman and The Spearman (1928) – are the work of a Croatian sculptor, Ivan Meštrović. And the mountain-sized Crazy Horse Memorial, still under construction in the Black Hills of South Dakota, was the vision of a sculptor of Polish origin, Korczak Ziółkowski.

The trope of heroic nobility these works reproduce has many echoes throughout a region where Native Americans represent the ingenuity and creativity of small peoples. In Hungary, ‘Playing Indian’ has channelled not only the demographic anxiety of a small nation that fears for its own cultural extinction, but also the frustration of political and social groups edged out by the dominant culture. ‘Indians’ stand for what is real, endangered, and exceptional. Over the last century, these features have been enacted by tens of thousands of Hungarians who wanted to be like Indians because they felt that, in some sense, they already were.

You can learn a great deal about a country by studying its Indians. Some years ago, a Hungarian friend of mine was renovating an apartment in Budapest when he found some photographs taken during the 1930s. One shows a man in a loincloth poised to throw a spear. Another features the same man clasping a woman’s hands while an older gentleman in an elaborate feather headdress makes like he is about to scalp her. In the background we see a dugout canoe and the Danube. 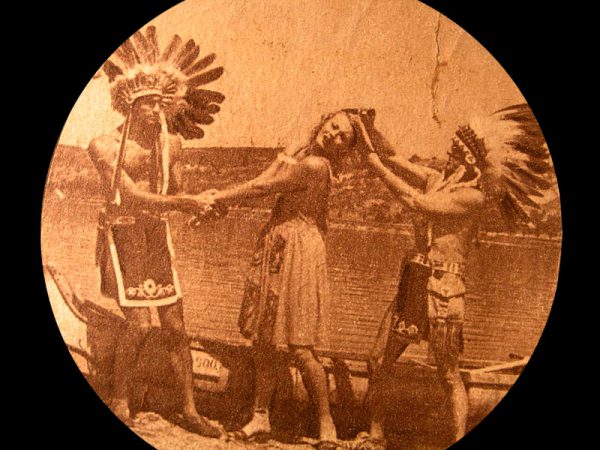 The ‘Indians’ in these photographs are of a particularly 1930s Hungarian vintage. In 1931, the artist and orientalist Ervin Baktay and a few of his friends started an ‘Indian’ camp, where participants took names like Star Dancer, Shaggy Wolf and Little Hamster. For anywhere from a few weeks to three months every summer, the Hungarian Indians built teepees, wore feather headdresses and moccasins, and smoked peace pipes on an island in the Danube, which in 1933 was formally designated an ‘Indian reservation’. The Hungarian naval river fleet even moved its manoeuvers elsewhere to avoid disturbing the ‘Indians’. As the group’s ‘chief,’ Baktay wrote a Hungarian newspaper essay in 1937 calling on his tribesmen to ‘fundamentally disconnect from the other, urban, civilized “I”: let us be children in spirit, let us know how to play, and delight in the beautiful … In this way the healthy physical sporting life also becomes a transformational, regenerating spiritual experience.’

Baktay saw the ‘North American Indian’ as ‘the most authentic of athletes among all the peoples of the world, and that in the most noble sense of athleticism,’ like ‘the perfect gentleman and sportsman.’ The physical prowess of Indians was due to their proximity to nature; they were skilled hunters who hunted only what they needed, a people who had evaded ‘civilization’s faults’ until ‘the white civilization’ stole their freedom.

As Baktay was gathering his ‘tribe’, fascists from a different corner of the zeitgeist were similarly entranced with nobility and physicality – not of the hunter, but of the national warrior. ‘Fascism,’ wrote the Italian ‘superfascist’ Julius Evola, ‘appears to us as a reconstructive revolution, in that it affirms an aristocratic and spiritual concept of the nation’. The movement saw to the ‘elevation of the nation in practice to the degree of “warrior nation”’.

Though some of Baktay’s ‘Indians’ may have had – or later developed – fascist sympathies, he himself was not a fascist. After studying to become a painter in Munich, he returned to Hungary, where he and his friends were so enamoured with ‘wild west’ films and novels that they set up a ‘saloon’ in a studio. In the late 1920s, Baktay spent three years in actual India studying its culture and religions. Then he became an editor for a new Hungarian journal called The Globe (A Földgömb), whose motto was ‘My reason serves to grasp the world!’ Being an ‘Indian’ was yet another way to identify with a different nation and culture or, as my friend who found the photographs put it, to ‘break away from the problems of Hungarian ethnogenesis’ by trying something else.

Although Baktay stopped running the camp in 1955, it hung on in some form until 1963. By then another Hungarian personality, the popular singer Tamás Cseh, had already started his own Indian camp elsewhere in the country. In 1961, he and a few friends fled to the hills to play Indian while on vacation in Bakony, stripping life down to a survivalist minimum. Over the years the group sought to make their camp less campy and more authentic. Soon they were singing Native American folk songs in their original languages, with dance steps to match. But the sixties were different from the 1930s. The political backdrop was a stagnating state socialism, rather than a rising fascism. In the words of a Hungarian journalist who probed the camp’s history, the ‘freedom, the simplicity of life stood in contrast to the communist Hungarian oppressive, centralized, state-stupefied world’.

While Baktay and Cseh’s ‘Indians’ delighted in the cultural and ethnic difference of Indians, others sought to uncover a hidden ethnic link between Indians and Hungarians. In 1965, a Hungarian goldmine explorer going by the name of Juan (János) Móricz claimed to have discovered Amazon Indians in Ecuador who spoke Hungarian. He developed an elaborate theory of how proto-Hungarian explorers had arrived by boat from the West after leaving their mark on dozens of place names in Indonesia and Hawaii. Móricz argued that sinister forces, among them the Habsburgs and the Spanish, had long conspired to prevent the Hungarians from becoming aware of ‘their ancestors’ glorious past’ by silencing or stigmatizing those who wrote about the connection.

In 2013, Tünde László wrote an article on ‘The Ancient Hungarian Traces in the Land of the North American Indians.’ László is the editor-in-chief of the Hungarian Woman Magazine, an online repository of Hungarian pronatalist, nationalist, new-age mysticism. In the article she asserted that ‘the number of very suspicious similarities or total overlap between the cultures of the Hungarians and the North American Indians I have studied is so great that the only way to possibly explain them is a common origin.’ Part of this presumed common ancestry, she concluded, also offers the key to the future of the Hungarians. In the ‘Dakota’ language, László writes, the word for ‘foetus’ is ‘mysterious one-of-us’. ‘What unspeakable wisdom and philosophy refined through the millennia addresses us with this nomenclature!’ she swoons. If only we fully grasped the meaning of that phrase, ‘the area wreathed by the Carpathian (Mountains) would once again resound with the laughter of children, and Hungary would be saved from all the threatening demographic predictions!’

An article on the website of the Hungarian television network ATV from 2015 declared that if demographic trends continue at the present rate, the Hungarian nation would die out within five hundred years. Although Viktor Orbán does not expect much from the electorate besides their votes, he has three prescriptive refrains: stop migration, stop smoking and have more children. He wants there to be more Hungarians and for them to live longer. In 2013, he received a prize from the WHO for his efforts to curb smoking, and state support for families with children has increased significantly under his government. ‘It is cause for celebration that the birth rate is now the highest it has been since 2010, that the number of marriages is increasing, and the decline in population hasn’t been so slow in years,’ Orbán said recently. ‘But the decline, even if it is slowing, is still a decline. It is the most personal decision of every person how many children to bear. Yet even though it is personal, it is also the most important one for the sake of our community.’

When Orbán asserted in 2016 that ‘we are the Indians,’ the comparison was meant to suggest that the survival of the Hungarian nation was at stake. Yet behind the rhetoric of national survival, Orbán’s primary interest seems to be his own political survival. He has radically altered the constitution – to cripple the independent judiciary and media – thereby making an opposition electoral victory nearly impossible, while handing out contract favours to a new elite of friendly oligarchs, as well as to his own village and relatives. The most recent scandal involves his son-in-law’s lighting company, which benefitted from large contracts drawn from EU funds (an EU fraud investigation has found ‘serious irregularities’ with the contracts and has sought to recoup 40 million euros). It can come as no surprise that Orbán noted in a recent speech that ‘we are threatened today with danger from the West. This danger has been brought to us by the politicians in Brussels, Berlin, and Paris.’ 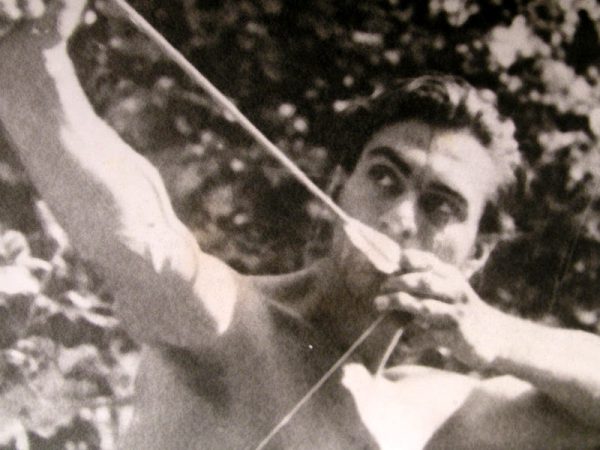 In a defence of Indian culture from 1921, Baktay observed that the ‘slogan of the West’ was the ‘struggle for survival’. But it was not really for survival that the West struggled. ‘The white race is moved by nothing else but self-interest, property, material advantages, and to reign.’ Perhaps Orbán is more of ‘the West’ than he presents himself, and the real Hungarian Indians are to be found elsewhere.

Holly Case is Associate Professor of History at Brown University and a former Visiting Fellow at the IWM, Vienna. This article was first published by Eurozine as a supplement of the printed version of Transit‘s 50 entitled Ein Zeitalter wird besichtigt. 1989 revisited.