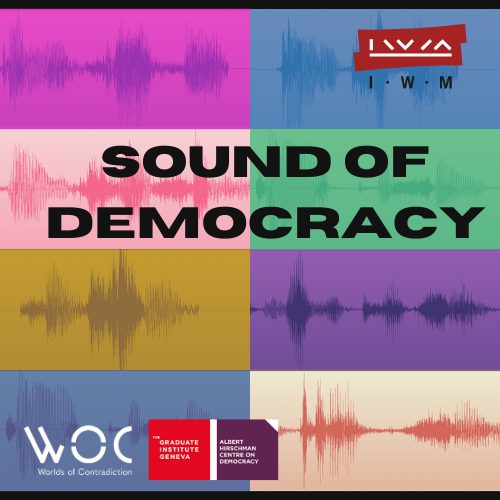 Welcome to the Sounds of Democracy blog! The following blog post was written by Shalini Randeria, who is the Rector of the Institute for Human Sciences (IWM) in Vienna, Professor of Social Anthropology and Sociology at the Graduate Institute of International and Development Studies (IHEID) in Geneva, as well as the Director of the Albert Hirschman Centre on Democracy at the IHEID. Furthermore, she holds the Excellence Chair at the University of Bremen, where she leads a research group on Soft Authoritarianism. She is also the host of the Democracy in Question podcast series.

We often know what democracy looks like. But what are the sounds of democracy?

I arrived at this question through serendipity. In September 2020 the Albert Hirschman Center on Democracy, Graduate Institute (Geneva) and the Institute for Human Sciences, IWM (Vienna), together with the Research Group on Soft Authoritarianism (University of Bremen) launched the successful podcast series Democracy in Question. I am host of the podcast that features some of the most important voices in contemporary academia, reflecting on democratic experiences and experiments the world over.

In the weeks leading up to the launch, as recordings were edited, transcripts written and logos designed, the Democracy in Question podcast was still missing a jingle to introduce each episode. So our team commissioned renowned intermedia artist Mukul Patel, well known for his conception and production of collaborative, interdisciplinary, and critical artwork, to compose one for us. Discussing the difficulty of describing what kind of music we were looking for, I remarked to him that I didn’t know what democracy sounds like!

When Mukul Patel sent us the soundscape he created for the introductory jingle of the Democracy in Question podcast, it took me and the team by surprise. In fact, it exceeded our expectations by far.

Instead of a jingle, he had composed a multi-layered, nuanced, and dark, sombre soundscape, weaving into it police sirens and voices of protest from Charlottesville, Beirut, Hongkong and Khartoum. This is what democracy sounded to him today! And understandably so: As most of the world’s population lives in a formal democracy today, both established and new democracies face plummeting trust in parliaments and political parties. Worldwide, democracies are being torn apart by inequalities, political polarization and a politics of hate. Citizens are using the streets and the courts to challenge authority and to seek the accountability that is often missing at the ballot boxes. The form, content, institutions, practices and, ultimately, the very principles of liberal democracy are being called into question from India to Hungary and from Brazil to the US.

Listening to Mukul Patel’s soundscape, which so aptly captures people’s struggles to deepen democracy and make it work for them so beautifully, my team and I found ourselves asking: What does democracy sound like to people in different places? Who is listening to these sounds? And what does silencing of protest, eavesdropping and surveillance, or the right to remain silent in a court mean? In short: What role does sound, or its absence, play in and for democracy?

Mukul Patel’s piece inspired us to new, intriguing questions that go beyond our Democracy in Question podcast. We found these so exciting and so important that we decided to pursue them with him. And so, our new podcast project, Sounds of Democracy, was born.

What is Sounds of Democracy?

Built upon a participatory process that collects and curates diverse sounds of democracy through contributions from artists, activists, academics, and a variety of audiences from across the globe, the Sounds of Democracy opens new avenues of enquiry. Embracing of a multiplicity of voices will enable an audio archive to emerge that is unconstrained by discipline, institutional location or geography. Flanking the podcasts is this blog published on the IWM website that will showcase scholarly, artistic, activist work that expands on the themes of the project and develops these in different directions. The blog provides space to delve deeper into specific issues and an invitation to connect academic concepts with artistic interpretations.

The Sounds of Democracy podcast will be a companion to the second series of the popular ‘Democracy in Question?’ podcast hosted by me. With the support of partner institutions (including the Albert Hirschman Centre on Democracy at the Graduate Institute, Geneva and the Research Group on Soft Authoritarianism, University of Bremen) and diverse media partners the IWM will launch the Sounds of Democracy project in early 2021, beginning with a podcast series that explores the multi-facetted relations between democracy and sound.

The Sounds of Democracy will be curated and hosted by intermedia artist Mukul Patel, whose practice embraces writing, composition and programming, and typically involves the devising of tools and participatory processes. Several of his works address sound in space and language under constraint. His political concerns revolve around the possibility of autonomy in algorithmically managed techno-utopias predicated on ‘singularity’ and ‘artificial general intelligence’. Since 2001, he has directed a critical arts production studio and occasional residency/salon in London (with Manu Luksch).

The podcasts will also lead to a sound installation to be launched at the Vienna Humanities Festival in Fall 2021, which will then travel to partner institutions around Europe and beyond. The installation will be designed as an open, participatory environment and framework rather than a device of representation, so that its formal aspects mirror the topic under enquiry.

Since the first material manifestation of democracy, personified and crowning Demos in an Athenian marble relief of 336 BCE., we have become accustomed to depictions of democracy in the visual arts. The archive of such representations, of the conceptions and practices of democracy, can be found across museums and public spaces around the world. It ranges from sculpture and painting to revolutionary posters, textile banners and graffiti. In a long tradition of civic visual art, these artistic visualizations have been imagined not just as conceptions of democracy but even as metaphorical and physical bulwarks against attacks on democracy, as for instance quite literally in the case of Ahmet Ogut’s 2015 installation Bakunin’s Baracade. The visual also extends to the representation of data: Recently, academics and media outlets have been working to visualize the numbers behind democratic practices and asking if these visualizations could work as a toolkit to help reinforce them.
Although we are used to hearing, listening to and performing speech acts that constitute part of the soundscape of democracy, the sonic and its role for democracy has not yet received the same attention as the visual. But the sonic reaches even beyond the oral and aural, and beyond language. Using a multidisciplinary and multifaceted approach, the Sounds of Democracy project seeks to illuminate vital and contested topics in democracy through sound— including music, noise and silence. As with the visual, we now ask: How can the sonic be a tool to stand against incursions against democracy?

To learn more about how to participate in the Sounds of Democracy project, or to enquire about becoming an institutional partner, please contact: Sarah Hayes, Head of Digital Communication, IWM, hayes [at] iwm.at

More from: Sounds of Democracy