Still an Impossible Job: Challenges and priorities for EU’s next High Representative 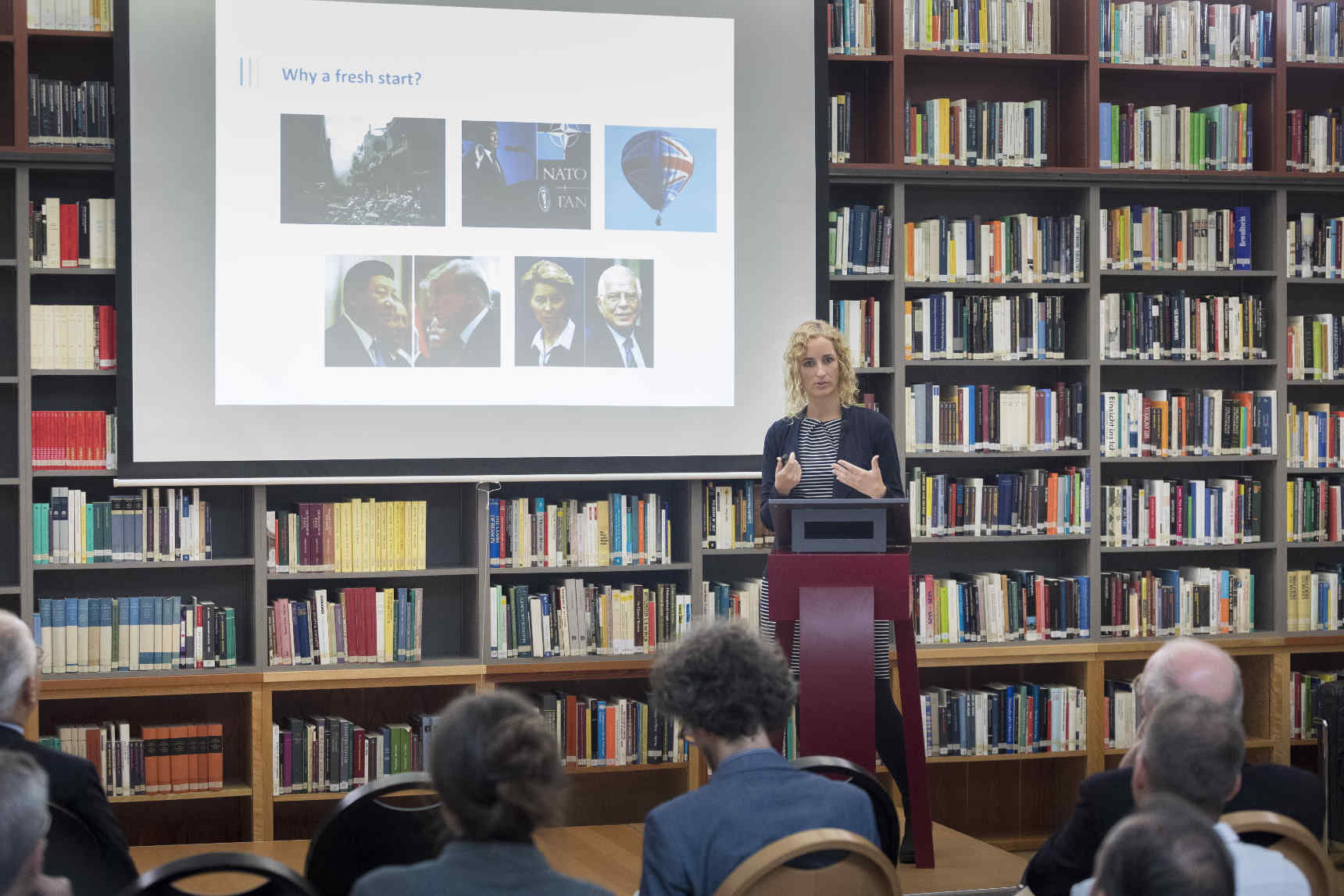 2019 marks the tenth anniversary of the ratification of the Lisbon Treaty. One of its key promises was a more coherent, effective and visible Common Foreign and Security Policy (CFSP). No single innovation encapsulates this promise more than the creation of the post of High Representative for Foreign Affairs and Security Policy and Vice-President of the European Commission (HR/VP).

When the post was created, EU insiders commented that it was an "impossible job." The officeholder has to juggle numerous "hats" and responsibilities. These include leading the European External Action Service (EEAS) and the European Defence Agency (EDA), chairing the Foreign Affairs Council, and coordinating the Commission’s external activities. The HR/VP is to put the CFSP into effect, bridge the supranational and intergovernmental sides of EU external action, and ensure consistency between internal and external policies. Moreover, being the Union’s chief diplomat requires a vast array of encounters in Brussels and around the world.

On 1 November 2019, the third post-Lisbon HR/VP is due to take office. Commission President von der Leyen tasked HR/VP-nominee Josep Borrell to deliver a "more strategic, more assertive and more united Europe in the world." Expectations on him are high in light of the magnitude of international challenges and fierce geopolitical competition. However, the HR/VP will also have to cope with an upgraded version of the post’s old structural constraints.

The first post-Lisbon HR/VP Catherine Ashton was criticized for her inability to juggle her various hats. She was relatively absent from the European Commission and failed to coordinate Commissioners dealing with EU external action. She was also seen as lacking ambition regarding the EU’s security and defence policy, positioning the EU solely as a civilian power. Her key achievement was setting up the EEAS and bringing officials from the Commission, the former Council Secretariat and the member states together under one roof. With more benevolent hindsight she was also praised for her role as a mediator in the Serbia-Kosovo talks and the negotiations on the Iran nuclear deal.

The second post-Lisbon HR/VP, Federica Mogherini, learnt from Ashton’s mistakes. In a symbolic gesture she moved her cabinet to the Commission’s Berlaymont building. She regularly chaired meetings of the Commissioners dealing with external action. Mogherini also made a point of playing her defence role to the full. She launched a major strategic review process, leading to the first update of the 2003 European Security Strategy, and particularly pushed for its implementation in the area of security and defence. Nevertheless, her record is mixed. She was praised for her visibility around the globe and for being an excellent communicator, but she was also seen as lacking focus and clear-cut priorities. It certainly did not help her legacy that Ashton’s achievements regarding Iran and the Balkans crumbled under her watch.

The challenge awaiting the third HR/VP could be described as juggling hats while someone is throwing balls at him. He will have to link the EEAS and EDA with the so-called "Geopolitical Commission," referring to the fact that almost all internal EU policies also have external aspects. In addition to chairing the Commission’s group on a Stronger Europe in the World, he will have to provide weekly updates on foreign policy to the College. While his coordination tasks increased, his standing in the Commission was downgraded through the creation of three executive Vice-Presidents directly reporting to the President.

The President also decided to create a new DG Defence Industry and Space that will likely step onto the turf of the EEAS and the EDA. Instead of placing this DG under the responsibility of the HR/VP (as suggested elsewhere) it will report to the executive VP for a Europe Fit for the Digital Age. The HR/VP is supposed to ensure that all work on defence is coherent, but the proposed institutional set-up enhances an old challenge: The HR/VP and the EEAS are meant to provide strategic guidance and coordinate, but the bulk of resources remain in the Commission. The HR/VP will have to counteract the creation of new silos to avoid a broadening gap between Europe’s defence policy and its industrial aspects. Finally, his already busy agenda will have to accommodate two of the President’s general demands to the College: visits to every member state during the first half of the mandate and forging a special partnership with the European Parliament.

The central challenge facing the HR/VP is that of forging consensus among the member states that goes beyond the lowest common denominator. In an interview in May 2019, Borrell complained that the Foreign Affairs Council was not a centre of decision-making but rather a "valley of tears" where condolences and concern is expressed without any capacity for action. Mogherini had already expressed her frustration with the workings of the Foreign Affairs Council during her hearing in 2014. She suggested, "we can probably make better use of our time and the time of the Ministers of Foreign Affairs if we plan for strategic thinking in that format too." However, distilling strategic thought from 28 member states proved harder than expected.

The key question thus remains: How do you get member states to agree on joint action when preferences differ? This applies to the EU’s relations with Russia and China as much as its responses to crises in Venezuela or Libya. In her mission letter to Borrell, von der Leyen suggested one way out: Use the Treaty clauses allowing for certain CFSP decisions to be taken by qualified majority vote. However, this is at best a longer-term option as a whole range of member states refuse yielding sovereignty in this domain.

The post of the HR/VP still looks much like an impossible job. Just like his predecessors, he will inevitably have to disappoint someone. Notwithstanding, he should start with a high level of ambition and take three steps to try to make the impossible possible:

First, he should become the central coordinator for the EU’s geopolitical role without spending all his time on coordination. To this end, he should use the first 100 days of his mandate to review the EEAS and bolster its capacity for strategic thinking. An upgraded strategic planning unit could liaise with the Commission services to prepare his weekly foreign policy updates to the College. These briefings should be used to make concrete suggestions on putting the comprehensive approach and strategic autonomy into action.

Second, the HR/VP should strike the right balance between visibility and focus. He should establish a well-crafted network of Special Representatives and special envoys to ensure the EU’s visibility and presence in key geographic and substantive areas of collective interest. He himself should focus on a distinct set of priorities where he actually has a common voice to represent. This will include some of his predecessors’ priorities namely Iran, the Balkans and the Sahel zone as well as upcoming crises or negotiations.

Third, the HR/VP should test the boundaries of his leadership role vis-à-vis the member states. Transforming the Foreign Affairs Council into a real centre for decision-making will require more than a revision of its working methods. His key priority should be internal mediation on key contentious issues such as the EU’s approach towards Russia, China and the US. This will require informal shuttle diplomacy and skilful coalition-building. This also applies to the extension of qualified majority voting. The HR/VP could, for instance, use the required visits to all member states during the first half of the Commission mandate to lead a systematic discussion on the options and areas of application of the respective Treaty clauses.

Whether the member states and other institutional actors will allow for a less restrained leadership role of the HR/VP remains to be seen. When reflecting on this question, EU foreign policy connoisseurs often nostalgically refer to the era under the first and only pre- Lisbon High Representative Javier Solana. He did not have the legal competences, they say, but he had the standing, charisma and determination to push through difficult compromises. He built his legitimacy on output rather than process. The third post-Lisbon officeholder will prove if this kind of leadership by action is a matter of personal capacity or whether the EU did indeed create an "impossible job."