The Polish Presidential Election: A Victory for the “Radicals”?

The surprise defeat of the Polish president Bronisław Komorowski by the Law and Justice candidate Andrzej Duda suggests a return of the reactionary and parochial politics of the Kaczynski era. Social scientist Magdalena Nowicka discusses where Komorowski and the Civic Platform went wrong, and whether this is a taste of things to come in the Polish parliamentary elections in October. 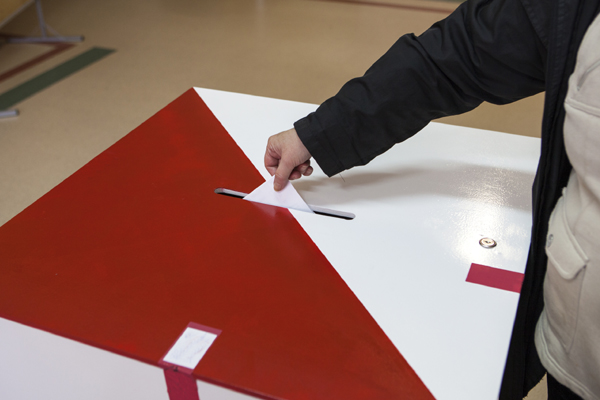 The results of the Polish presidential election on May 24 proved that anything is possible in a democracy. A month ago, no one would have predicted that Andrzej Duda, the candidate of the rightwing Law and Justice party (Prawo i Sprawiedliwość, PiS), would deprive the incumbent Bronisław Komorowski of re-election. When the PiS leader Jarosław Kaczynski announced that the largely unknown Duda would be running for president, the liberal media announced it as a “gift” to Komorowski and the centre-right Civic Platform (Platforma Obywatelska, PO). After all, at the start of the race, Komorowski still enjoyed the support of 70 per cent of Polish citizens. In the final count, Duda received 51.5 per cent of the vote.

Many are now are wondering whether Duda is a puppet of Kaczynski, and whether his election heralds the return of the conservative and Eurosceptic state of the previous decade, referred to as the Fourth Polish Republic. However, did “radical Poland” really steal the election from the country’s “rightful”, liberal-conservative leadership? Or was Komorowski and his party to blame for squandering their advantage?

Five years ago, the Polish public was called upon to choose between the so called “liberal” and “solidarity” Poland . The PiS demonized liberalism as the ideology of rapacious western capitalists and presented itself as the true heir to the republican ethos of Solidarnosc. In the parliamentary election of 2005, this strategy brought the PiS to victory. However, the 2010 election took place under the shadow of the Tu-154 crash in Smolensk, in which the president Lech Kaczyński had been killed, along with many other members of the government. Kaczyński was a president of limited popularity, especially among young people, and his death symbolized the end of the Fourth Polish Republic. Komorowski and the Civic Platform instead offered moderate social and economic liberalization combined with political stability, predictable decision-making and a pro-European foreign policy.

Since coming to power in 2007, the Civic Platform has established a good reputation in the European Union and can boast a positive economic balance. So why did the Polish electorate opt for change in 2015? There are several explanations. First, the government’s pro-modernization and pro-European message misjudged the climate of the public debate, where criticism of the social impact of the political transformation is rife. Second, the critical discourse has been reinforced by a “silent majority” of Polish voters, laying specific claims for changes which have little in common with neat slogans of modernization and political stability. Third, the Polish electorate has undergone a demographic shift underestimated by the political parties. It was the post-boom generation of twenty-year olds that swung the balance on May 24.

Customarily, it is the far-Right that campaigns against liberal democracy while the Centre and liberal Left offer ritual paeans on transformation and scare the public with the spectre of populism. To paraphrase Chantal Mouffe, the ideological battle between the Civic Platform and Law and Justice sometimes resembles the discussion on the relative virtues of Coca-Cola versus Pepsi. However, the difference between them runs deeper, at the level of the social imaginary. Komorowski built his campaign on a rhetorical division between “rational” and “radical” Poland. A vote for the former was an endorsement of evolutionary change, Europeanization and response to grassroots social demands. A vote for the latter meant support for clericalism, populism and parochialism.

Komorowski’s campaign was strongly backed by the liberal media. “Poland is neither a German-Russian condominium nor a state governed by Jews or Masons,” wrote the editor-in-chief of Gazeta Wyborcza before the election. The country, he continued, has become “a symbol of success”, a stable democracy with a growing economy, an important partner of the EU and a responsible ally of NATO. However, this time neither the narrative of progress nor scaremongering about the Right put Polish voters off . So are we seeing a radical rightwing backlash?

Social discontent has been growing in Poland for a long time. The first to have their say about the consequences of the transformation were intellectuals. In February 2014, Gazeta Wyborcza published an interview with the well known historian of ideas Marcin Król entitled “We were stupid”. Król, a participant in the round table talks of 1989, admitted that he and others leading the transformation had been fixated on the neoliberal model and ignored the consequences of the reforms on a large part of society. The result, he warned, was a wave of nationalism and populism accumulating below the surface. Król continued his critique in an essay in 2015, arguing that the liberal elites were oblivious to the needs of a frustrated population that today is at the brink of rebellion.

His diagnosis whipped up controversy in the liberal camp. In his book Dilemmas of Democracy, the philosopher Paweł Dybel accused Król of making an elitist distinction between an intellectual avant-garde and a silent, manipulated populace. At the same time, many agreed with Król that there is a discrepancy between liberal-left intellectual discourse and “harsh” reality. “The progressive elites have focused on gender and sexual inequality,” wrote Król, “while losing sight entirely of basic social inequalities”.

Meanwhile, a younger generation is making much more severe criticisms of the liberals of ’89. “With a few prominent exceptions,” writes the sociologist Jan Sowa in his book An Other Res Publica is Possible!, “the whole intellectual elite of the 1980s […] supported and actively assisted the transformation of the Polish economy, which consciously and intentionally tore large segments of society to shreds.” Sowa is by no means the only one making this criticism. The “treason of the intellectuals” is nowadays a leitmotif in a process of reappraisal being undertaken by twenty and thirty-year-olds, particularly members of the left-wing movement of Krytyka Polityczna and the circle surrounding the periodical Kultura Liberalna.

However, neither public self-criticism nor democratic utopianism translate into liberal votes. On the contrary, they strengthen the desire for a power change. Social scientists, including myself, failed to predict that this desire would express itself now and that it would take the form it did. In the first round of the presidential election, the rock musician Paweł Kukiz, with his anti-establishment slogans about overthrowing the elites, got 20.8 per cent of the vote, mainly from young people. In the second round, most of his supporters, unable to imagine voting for the Civic Platform, opted for Duda. The fact that PiS discourse consists mainly of conspiracy theories, historical animosities and visions of national decline didn’t seem to matter. A large group of voters are too young to remember the confrontational Kaczyński government between 2005 and 2007. Many older people, on the other hand, are prepared to overlook its failures, feeling that they are the “losers of the transformation”.

Komorowski’s defeat may bring home to the Civic Platform that a cosmetic correction of its programme will no longer do. In his campaign spot, Komorowski presented himself as an anti-communist modernizer leading Poland towards democracy. However, the twenty-year-olds who voted en masse for Kukiz take for granted Poland’s membership of the EU and perceive the events of 1989 as “prehistory”. Social liberalization is not a priority for them either. Throughout his campaign, Duda made numerous controversial statements, for example about the penalization of in vitro fertilization or Poland being overtaken by “gender ideology”. He also cast doubt over Polish guilt in the Jedwabne pogrom of 1941. This did nothing to put off young voters, a large majority of whom are simply indifferent to such issues. “Our political programme focuses on the stomach, not the heart – we won’t play around with a struggle against the Church,” says Katarzyna Paprota, a representative of the newly-formed party Razem (“Together”). Razem unites people who can’t find a decent job or work under “junk contracts”. This is the “harsh” reality that young people really care about.

What is next for Polish politics? There are three possible scenarios. The first involves a radical change of the power elite. The post-election debate has been dominated by talk about the “arrogance of the authorities”. Despite attempts to distance himself from his party during the election campaign, Komorowski was perceived as the personification of the Civic Platform. The question is whether he will become a symbol of the party’s failure in the public mind, which is about to vote again in October, this time to choose the government. Much has been said about the inevitable defeat of Civic Platform, and the electorate might get carried away by the media prophecy. In that case, the Law and Justice party may form a populist and Eurosceptic coalition with Paweł Kukiz, if he manages to establish his power base in time.

The second scenario may be compared to the chant of Polish football fans after another defeat of the national team: “Poles, no harm done!” According to many commentators, no harm has been done for several reasons. First, office will turn any radical into a relatively moderate technocrat. Second, Duda is seen as the new, “more civilized” face of PiS. “Let’s give him a chance,” says Lech Wałęsa, otherwise a resolute opponent of Kaczyński’s party. Third, Poland has a stable democracy and a balanced economy that many say will not be affected by a change of government. Finally, as if to console feminists, columnists claim that the new president’s wife, Agata Kornhauser-Duda, will be a political hawk and “a western-style First Lady” – conclusions based on a few laconic remarks she made during the campaign.

The third and, in my opinion, most plausible scenario is that the social anger will be partially exploited and partially diffused. Two new political parties aiming at the younger generation have already been formed that reject the nasty rhetoric of Kukiz. The first is the aforementioned Razem, often called the voice of the precariat. The other is its opposite: the neoliberal Modern Poland (Nowoczesna PL), whose mentor is none other than Leszek Balcerowicz. A revolution will not ensue if either party wins seats, however the rightwing monopoly on social politics might be broken. It is also worth remembering that voter turnout in the presidential election was only 55 per cent, suggesting that there is still a large group of floating voters. Duda commences his presidency on August 6. If his debut resembles the rule of the Kaczyński brothers, many may start to miss Komorowski and the “dull” but predictable Civic Platform. Nor is there much evidence that Poland, which is fond of the idea of being at “the heart of Europe,” will follow in the footsteps of Hungary.

Did “radical Poland” win the presidential election? The answer is no, there has been no winner so far. However, one thing seems certain: that liberal slogans about progress and modernization have lost their appeal among voters. Polish politics needs a new set of arguments.

Magdalena Nowicka-Franczak is Assistant Professor of Sociology at the University of Łódź and Bronislaw Geremek Junior Visiting Fellow at the IWM (2014–2015). Her research project deals with public acts of self-criticism in Poland and Eastern Europe.