Free and Unfair: The Hungarian Elections

Hungary’s parliamentary elections in April saw a 61% turnout, the lowest since 1998. The high abstention rate was a sign of disaffection with Hungarian politics: four-tenths of the electorate believed it was left without a genuine political choice. 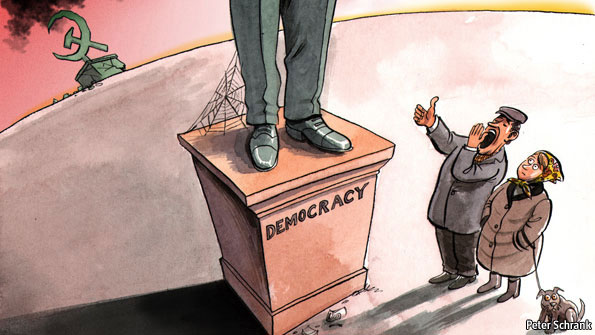 Fidesz, the rightwing populist party led by Viktor Orbán, received 45% of the votes, giving it a strong mandate to continue to govern. Thanks to the disproportional voting system introduced by Fidesz, the party retained its two-thirds parliamentary majority. However, of a total of 8 million citizens eligible to vote, only 2.1 million cast their ballot for Fidesz; this was 8% (or 600,000 voters) less than in 2010. Orbán’s description of the new electoral system as the manifestation of “national unity” is therefore clearly implausible. However, Orbán’s charismatic leadership and his anti-European, Christian-nationalist rhetoric have managed to forge an alliance between conservative voters and the lower middle class, which expects the state to halt its existential decline. In 2002 and 2006 – when the previous election system was still in place – this solid, two million-strong voter base didn’t suffice for a Fidesz victory. This time, it secured the party a supermajority.

The alliance of leftist opposition parties came second with 26% of the vote. Led by Attila Mesterházy, the alliance is made up of the Hungarian Socialist Party (MSZP), Together (Együtt), Dialogue for Hungary (PM), the Democratic Coalition (DK) and the Hungarian Liberal Party (MLP). Since the previous elections, the alliance has managed to increase its vote by nearly 300,000, receiving a total of 1.2 million votes. Nevertheless, its performance at the polls is seen as a crushing defeat. In the last four years, the left has been unable to reinvent itself from the ground up. It has failed to communicate a clear identity or program; its leaders, who are engaged in constant rivalry, decided to field a joint list only at the last minute. The primary message of the alliance was a desire to run Viktor Orbán out of office; it had nothing to offer in terms of a genuine and positive vision. The list was dominated by MSZP politicians, held responsible by voters for the policy failures in the period up to 2010. Following their defeat, the leaders of the coalition parties announced that they would be running separately in the European parliamentary elections in May.

The third place went to far-right party Jobbik, with 20.5% of the vote. This represents some one million voters, 3% (100,000 votes) more than in the previous election. The results for individual constituencies show that in half the country Jobbik beat leftwing candidates. Several newspapers commented that the elections were a great victory for Jobbik, which promotes Hungarian nationalism, radicalism, anti-globalization and racism. Analysts blamed Orbán for the growing support of rightwing extremists and said that Europe could no longer ignore the far-right. In the months before the elections, Jobbik assumed a more moderate tone, campaigning with the slogan of “livelihood, order and accountability” and muting its standard racist message. It not only ran successfully in the poorest, north-eastern region of the country, but also managed to gain new positions in counties in the west. Today, Jobbik is a party with a national presence and the potential to capture the political center.

The green party, Politics Can Be Different (LMP), came last with 5.2% of the vote. Although this falls short of the party’s 2010 performance, it may grant green policies a new lease on life. Keeping an equal distance from both the rightist and the leftist bloc, LMP sent a middle-of-the-road, anti-establishment messages to its voters during the campaign.

The OSCE found that the elections themselves were effective and largely transparent, however cast doubt on the legitimacy of Orban’s landslide victory, commenting on the “undue advantage” enjoyed by Fidesz and the lack of freedom for the opposition during the campaign. The European Parliament, the European Council, the United States, and several EU member states have also openly criticized this abuse. The German government demanded that Orbán observe “fundamental rights” and govern responsibly. The Financial Times leader column suggested that Hungary’s EU partners could not continue to greet each outrage with embarrassed silence.

The act on electoral procedure was passed without meaningful public debate, in violation of both Hungarian and international practice. Constituency boundaries were shifted around to make leftwing districts more populous than rightwing districts, causing a leftwing vote to carry less weight. Different rules apply to Hungarian nationals abroad and so-called “Trianon” Hungarians living beyond state borders. Moreover, under the new system extra mandates are added to the list of the winning party, which makes the regulation extremely disproportionate. These rules violate the principle of equal vote. There has also been a failure to properly regulate a number of important areas connected to campaign financing, such as the campaign activities of satellite organizations. Using public funds, Fidesz outsourced part of its campaign to a civic organization with close ties to the party, the Civil Alliance Forum (CÖF). Thanks to new financing regulations, the transparency of the system and its accountability has been compromised.

The Media Council set up by Fidesz is not politically neutral. The acquisition of media companies by investors with close ties to Fidesz undermines the plurality of the media and forces journalists to self-censor. Regulations introduced by Fidesz prohibit commercial television stations from running financed promotions, which did not stop government ads being aired. The majority of television channels broadcast reports that are biased towards Fidesz. Together, these factors grant the government significant and unfair advantages and restrict citizens’ access to proper information. The result has been a loss of public confidence in the electoral system. Fidesz not only campaigned as a party, as is usual in any multi-party democracy, but the Fidesz-controlled state administration also “campaigned” by using taxpayers’ money and creating an uneven playing field. The boundaries between party and the state became blurred. This violates the principles about fair competition laid down in OSCE’s 1990 Copenhagen Document.

The lower middle classes and the poor, victims of the discriminative governmental social policies of the past four years, have been compensated with utility-cost cuts. While advertising on utility-cost cuts are delivered regularly to all Hungarian citizens, the burden of special taxes is borne by various segments of the population in isolation. The majority of the public has been convinced by the media that, despite permanent economic stagnation, “Hungary has been performing better” over Fidesz’s four-year term.

Today, the Hungarian public is constantly reminded by its political leaders of the importance of national pride. Individual rights and the democratic institutions that protect them have taken a backseat to constitutionally endorsed policies of collective identity and cultural uniformity. With government propaganda about “order”, “home”, “fatherland” and “family” drowning out all other voices, many are voting with their feet: In the past four years, half a million people have left the country.

András Bozóki is Professor of Political Science at the Central European University. His recent book Virtual Republic was published in Hungarian in 2012. Before the elections, Bozóki gave a lecture at the IWM entitled “Broken Democracy, Nationalist Populism, and Predatory State“.