Witness: Ukraine in the Photographs of Aleksandr Chekmenev 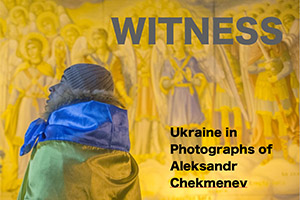 The exhibition includes photo series produced by the photographer over the past 17 years.
Curated by Konstantin Akinsha and Alisa Lozhkina 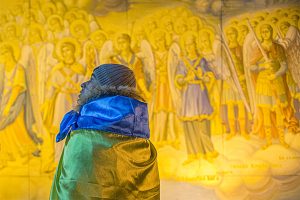 Financed by the Temerty Fund at KBF Canada, IWM is showing a selection of works by one of the leading contemporary Ukrainian photographers Aleksandr Chekmenev in the IWM premises.

The exhibition includes photo series produced by the photographer over the past 17 years.

Aleksandr Chekmenev is one of the leading contemporary photographers in Ukraine. His work has frequently appeared in Time, The Guardian, Vice, Libération, and many other international news outlets. But Chekmenev is not a traditional photojournalist: his photographs have also often been shown in contemporary art exhibitions and purchased by major international art museums.

Born in the city of Luhansk, Chekmenev began his professional career in a local photo studio. In his spare time, when not producing passport snapshots and wedding photographs, the young photographer focused on different types of images. What attracted Chekmenev’s attention were the people impoverished by the tectonic changes wrought by the decomposition of the Soviet Union; the homeless, who became an integral part of the post-Soviet cityscape; and abandoned old people, cast off like litter across the countryside.
In his early works, the photographer had already found his visual language. His genre is the portrait. Even in his news photography, Chekmenev’s focus is on human faces. He relies on the old device of serial photography developed at the beginning of the 20th century by August Sander, the famous German photographer. Chekmenev’s series, based on the persistent repetition of powerful thematically united images, morph together into an endless contemporary version of Antlitz der Zeit (Face of Our Time), Sandler’s famous 1929 book. Unlike his great predecessor, the Ukrainian photographer prefers to produce distinct yet reminiscent portraits of people photographed in the same context (dilapidated houses, hospitals, war zones). As a result of this technique, his repetitive catalogs of contemporary Ukrainian human types relate a story of the population’s suffering or the anguish of victims of war.
Chekmenev’s images are often disturbing; they provoke the uncomfortable feeling we experience when we see the reality everyone prefers not to notice. And yet his photographs are free of any voyeurism. Illegal coal diggers, street beggars, poverty-stricken inhabitants of a Roma village, alcoholics, and town madmen are rendered stunningly humane. They are the marginalized in a country that tries to forget they exist.
Chekmenev’s collective portrait of Ukrainians, his chronicle of historical developments from the 2014 Maidan revolution to the war in the East, is simultaneously unflattering and full of compassion. His gaze is the gaze of the concerned witness able to see in suffering a manifestation of human dignity. (Konstantin Akinsha and Alisa Lozhkina)