When history makes sense in practice 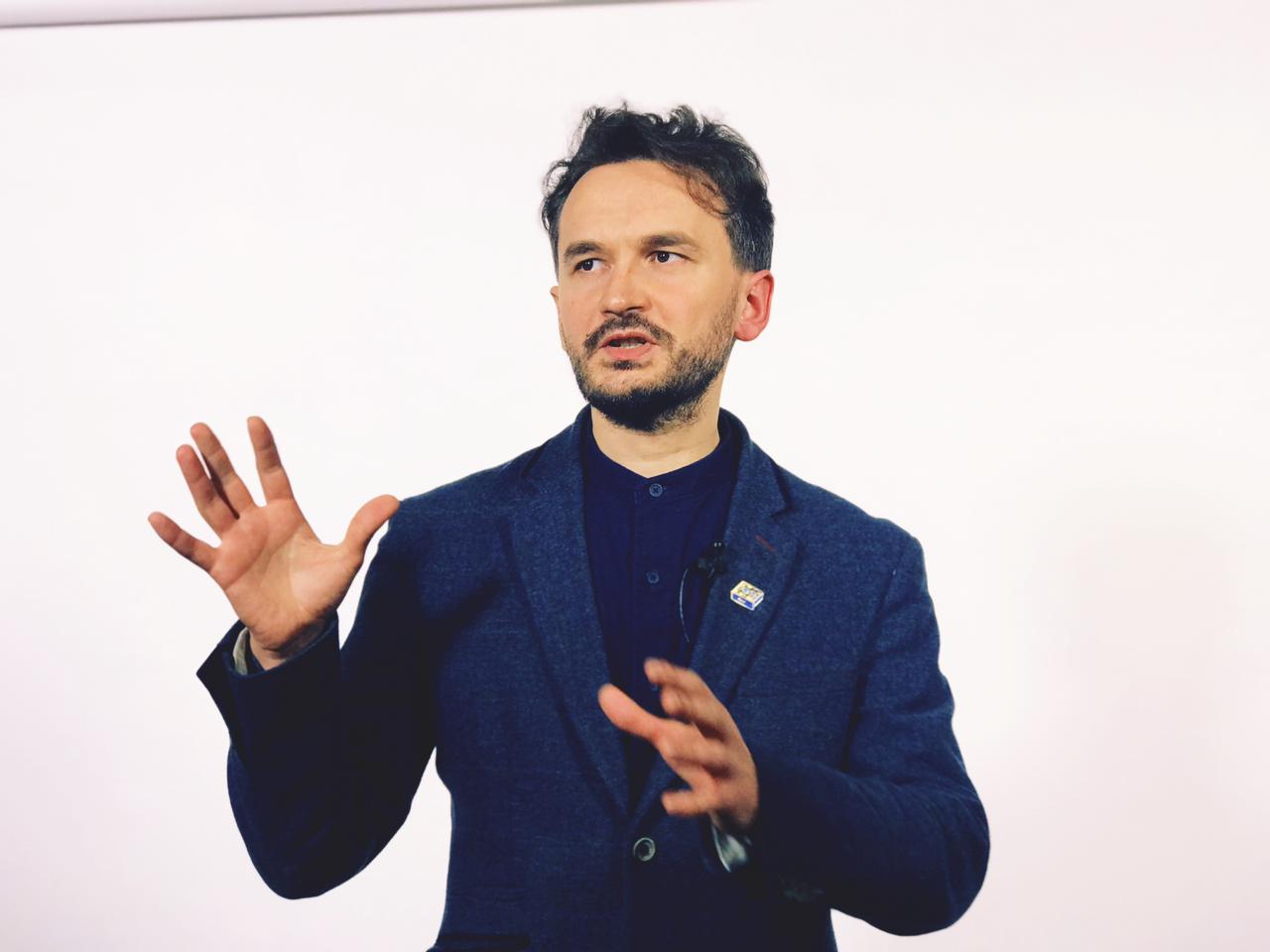 Lidiia Akryshora, Research Assistant in our Ukraine in European Dialogue Program, interviewed former fellow Mykola Balaban, a young Ukrainian historian. They discussed how obtaining a fellowship within this program has influenced his professional life and research.

It is impossible to tell the story of Europe without including Ukraine in it. This is the motto of the program Ukraine in European Dialogue at the Institute for Human Sciences / Institut für die Wissenschaften vom Menschen (IWM) in Vienna, Austria. The program is a scientific project of fellowships, events, and publications, bringing together Ukrainian scholars and intellectuals, as well as their colleagues across Europe and North America to reflect on the most pressing issues facing the world today. Its premise is that both sides stand to benefit from the insights into politics and civil society that emerge from this mutual exchange. The project was initiated in 2015, in the wake of the Maidan revolution and the subsequent Russian annexation of Crimea and invasion of eastern Ukraine. Since 2019, it has been financed by the Temerty Fund at KBF CANADA.

On the importance of getting out of your bubble

Mykola spent the first half of 2019 as a Junior Visiting Fellow in the Ukraine in European Dialogue Program, and still recalls his experience as ‘fantastic’. It is a very generous response for an academic. He certainly made great use of his time in Vienna: during his stay at the Institute, he wrote almost his entire PhD dissertation. He not only benefitted from the institute’s rich event calendar, but also from the interdisciplinarity of the scholarly community. “Because the IWM defines the humanities so broadly, you get the Medici effect in action”, says Mykola. He profited from chances to interact with scholars from different fields, as well as from what he calls ‘low-stakes peer review’ – swapping insights and ideas with colleagues.

An ideal place for exchange, the IWM really draws introverts out of their shells, laughs Mykola. He jokes that two people live inside him: one is a scholar, thinking and observing; the other is a man of action. In Ukraine, he spends a lot of time volunteering for various initiatives, so the man of action always wins out. Thanks to his Ukraine in European Dialogue fellowship he had a chance to step back and concentrate on his research project. “It took me out of the Ukrainian context, and with distance from the concerns posed by that context I was able to understand myself differently, and to think about issues in Ukraine differently”.

Scholarly research on violence and practice

With his dissertation project “Two Weeks of Interconnected Violence in the Lviv Prison Massacre, Anti-Jewish Pogroms and the Murder of Polish Professors on June 22nd – July 4th, 1941” Mykola specialises in the micro-history of violence.

Unlike a lot of scientists who focus on the ‘national turn‘ of such conflicts and focus selectively on one wave of violence while ignoring others, Balaban tries to avoid treating these three events separately. Instead, he sees them as “…entangled waves of the same process, which is the mass violence that was triggered by the war but encompassed the civilian population”.

Mykola himself was in eastern Ukraine while serving in the Ukrainian army and saw action in Donetsk oblast. When asked to share how his training as a historian influenced that episode of his life, he simply says that for him the experience was mostly anthropological, and it helped him to make sense of the history that to that point he had only thought about from an academic perspective.

Before joining the army Mykola spent a couple of months conducting archival research in Israel. The reports he was reading in the Israeli press, especially the Russian-language press, pushed him to join the army. Many media outlets were reporting that ‘Ukraine was collapsing’, calling the entire predicament ‘a civil war’, as if society had spontaneously combusted. His experience on the front in Eastern Ukraine put these worries to rest.

History as a way to make sense of the world today

In the army, Balaban found himself seeing the real-life embodiment of the theories he works with as a scholar. If there is no pre-existing tension between national communities or social classes, there is little chance for violence to break out. Despite the occasional shelling and explosions, the villages he was dispatched to were relatively calm.

After this experience it became harder for him to read research that, for example, asserted a direct correlation between violence and ideology. “This is really reductive. Because the fact is that it is very difficult to start shooting at another person”, concludes Mykola. Nevertheless, his previous research on violence gave him a different perspective on its mechanisms. This proved invaluable on the ground, where it made his advice vital to his superiors and the civilians he was protecting.

In that sense, Mykola has good reason to deny that history is merely a dead science, something just written about in books and discussed in dusty offices. He thinks that well-written history unites the present, the past, and to some degree the future: “History allows us, without conducting some sort of political experiments, to understand the mechanisms that govern society”. He believes that if one approaches history with the right questions, they can get a lot of answers, and not only for themselves personally.

The horizontal development of trust

As a historian, Mykola works a lot with the concepts of violence and distrust. As an activist, he is trying to use that knowledge in consulting the Ukrainian Centre for Strategic Communications and Information Security. One of the centre’s tasks is to expose information attacks against Ukraine.

The modern world is overwhelmed with disinformation. These issues are especially acute in Ukraine in the context of a pandemic, where trust in state institutions and science is under strain. An easy explanation would be that the Soviet heritage of the country has undermined people’s trust towards public authority. Mykola argues that this explanation is too simplistic, and that this problem is also found elsewhere in the world. Ukraine was actually one of the first battlegrounds of information warfare.

Mykola shares Hannah Arendt’s insight that the foundation of society is horizontal connections. People interact and build relationships based on trust, not on the vertical level, but the horizontal, which means that they must have trust in one another. Ukraine’s historical development delayed the development of such connections. Many Ukrainians grew up with the mantra that you should not trust a fellow communal apartment resident, only the person sitting in the Kremlin and doing all the thinking for you. “On the one hand outwardly you have to demonstrate your loyalty to something, while internally you might be a totally different person. And this is what Ukrainians are dealing with, they have to figure out how to outgrow this.” This double mentality, as Mykola tries to show, is still present within a lot of Ukrainians, even if things are slowly changing.

The unique expertise of civic organizations

The 2014 Maidan revolution is evidence of this change. Mykola is confident that the civic organizations that have arisen since then serve as a natural immunity against certain viruses. Civil society’s expertise could be harnessed to combat misinformation about the pandemic as well, as Mykola says: “We already have very strong civic organizations and institutions that research and write about disinformation, gather evidence, whether about COVID, or about history, or external narratives that are being imposed on us”.

He thinks that state institutions, on the other hand, have not yet developed such an expertise. And this is what the young historian is trying to build, by combining his scholarly and practical experience.

In 2014-2015 Ukrainians demonstrated how well they can mobilize around the right cause. “We were able to fight. And now, it seems to me, we have entered a phase of apathy, especially towards the fight against aggression or information warfare.” The next challenge facing contemporary is the transition from the sprint track to the marathon.

Watch a short video of Mykola Balaban on YouTube

For more information about the Ukraine in European Dialogue Program page on our website.