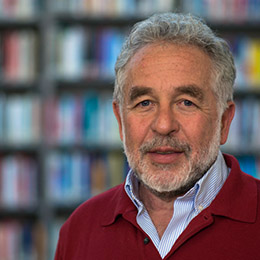 János Mátyás Kovács graduated at the Karl Marx University of Economics, Budapest in 1973, defended his doctoral dissertation (dr. oec) at the same university in 1975, and became a research fellow at the Institute of Economics, Hungarian Academy of Sciences, Budapest. In 1987, he moved to Vienna, and worked as a Permanent Fellow at the Institute for Human Sciences (IWM) between 1991 and 2018 while remaining an external research fellow of the Institute of Economics until 2014. Since 2009, he has taught history of economic thought at the Department of Economics, Eötvös Loránd University, Budapest. Kovács joined RECET (Research Center for the History of Transformations) at the Institute of East-European History, University of Vienna in 2019. He is senior member of RECET, permanent fellow emeritus of IWM, and professor of economic history at the Eötvös Loránd University. He served as an editor of Transit (Vienna) and 2000 (Budapest) until 2017.