Existential and Phenomenological Perspectives on Sacrifice and Gender
Conferences and Workshops

Sacrifice is a popular theme in philosophical and theological discussions. The concept remains ambiguous, however, and the field is contested across anthropological, ethnological, sociological and ethical perspectives. The objective of this workshop was to discuss gendered aspects of sacrifice from the perspectives of phenomenology and existentialism – disciplines that view sacrifice through the lens of the sacrificial experience.
The springboard for the phenomenological and existential explorations were the works of Søren Kierkegaard and Jan Patočka and their interpretation in Derrida’s Gift of Death. The primary focus was the experience of sacrifice. Although none of these authors offers a systematic account, the workshop built on Kierkegaard’s idea of ‘weaning the child’ and Patočka’s ‘sacrifice of the mother for her child’ to tease out the gendered aspects in their respective systems. A more complete development of the theme of gender in sacrifice in the works of feminist thinkers such as Simone de Beauvoir, Julia Kristeva, Luce Irigaray and Judith Butler was seeked.
The workshop addressed questions such as: ‘Is it possible to overcome the sacrificial logic that seems to be inherent to humanity?’; ‘Is it possible to transform and share the sacrificial experience so that it is not so obviously lopsided with respect to gender?”

October 29, 2021
Session 2: Sacrifice and Feminism
Moderator and commentator: Clarissa Breu (University of Vienna)
10:00 – 11:00 Sara Shabot Cohen (University of Haifa)
From Women’s Sacrifice to Feminist Sacrifice: Medicalized Birth and ‘Natural’ Birth versus Woman-Centered Birth
11:30 – 12:30 Katerina Koci (Institute for Human Sciences, Vienna)
Doomed to Sacrifice?: Childbirth as a Key to Redemption of Hu-MAN-kind from
Patriarchy
Session 3: Jan Patočka and phenomenologies of sacrifice
Moderator and commentator Ludger Hagedorn (Institute for Human Sciences, Vienna)
14:00 – 15:00 Sandra Lehmann (University of Vienna)
Caring for the Self beyond Itself: Notes on Sacrifice for Nothing and the Hyperbole of Being
15:30 – 16:30 Martin Koci (University of Vienna)
Almost for Nothing?: The Question of Sacrifice in Jan Patočka 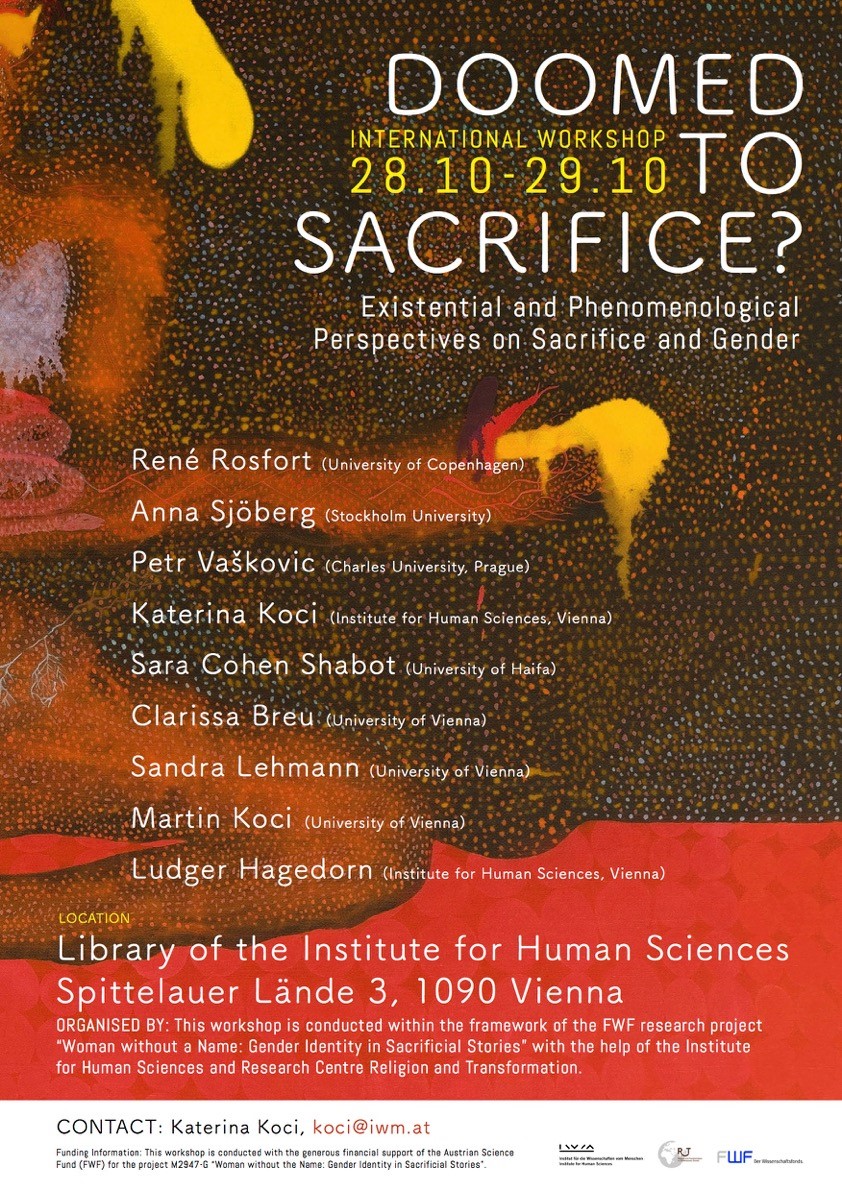 More events from: Conferences and Workshops