Introducing a New Podcast Series - Between Dream and Tragedy: Europe’s Story After 1989 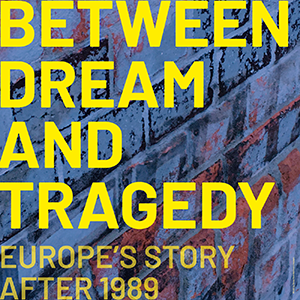 The series, entitled "Between Dream and Tragedy: Europe’s story after 1989" will be released fortnightly and is available via the IWM website as well as for download on all major podcast libraries. The first episode, 1989, is now available and deals with the events of 1989 in the context of the post-war European integration project. Episode one discusses the relationship of European integration to the nation-state with reference to IWM Permanent Fellow Timothy Snyder's argument on Europe after empire and the peace project myth.

Luke Cooper was a Europe’s Futures Fellow here at the Institute for Human Sciences in Vienna in 2018-2019. One of the projects that he worked on during his tenure was a series on Europe after 1989. Luke Cooper, academic and scholar of international relations and politics from the United Kingdom, is also the co-host of the “Another Europe” podcast.

The episodes of around 30 minutes apiece are made up of narrative script by Luke Cooper, interviews and archive material.

Intended for a broader intellectually engaged general public and undergraduate students looking at the history of Europe for the first time, it gives numerous certain insightful views of the making of the EU and the challenges Europe confronted during this period of three decades. Through events such as the post-communist transition, the violent collapse of Yugoslavia in the early 1990s, or the creation of the single market in Maastricht, to the economic and financial crises of the late 2000s, Luke Cooper interviews actors who were involved as well as analysts studying these events. It is at moments a riveting listen.

We are very glad to be able to now present the result of his work.

The episodes are structured in the following way:

This episode discusses how the dream of 1989 came crashing back down to reality in the difficult economic transition. It places the events of the 1990s in the context of the Thatcher and Reagan revolution.

This episode discusses the history of the monetary integration and the problems of Maastricht and the crucial role that Mitterrand played in the design of the system. It identifies the surprising level of support European federalism had in the 1980s debate - a third of EEC members backed it, and it achieved an extraordinary level of popular support in the Italian referendum of 1989.

A rough guide to the history of the Eurozone crisis with a focus on Greece and Germany.

This episode looks at the troubling parallels between the collapse of Yugoslavia and the contemporary rise of nationalism in Europe.

This episode, prepared in COVID-19 times, is framed around two events of 2020 - Brexit, and the EU response to the pandemic. They both show very different possibilities for Europe's future. Arguments presented here conclude the episode suggesting why federalism most probably does not have a future while an internationalist and cooperative Europe is very much still in play.