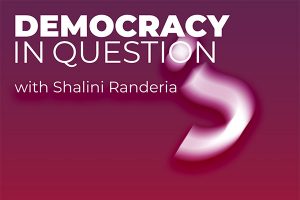 Most of the world’s population lives in a formal democracy today. But in both established and new democracies, trust in parliaments and political parties is plummeting. Worldwide, they are being torn apart by inequalities, political polarization and a politics of hate. Citizens are using the streets and the courts to challenge authority and to seek the accountability that is often missing at the ballot boxes. The form, content, institutions, practices and, ultimately, the very principles of liberal democracy are being called into question from India to Hungary and from Brazil to the US.

Democracy in Question is the new podcast series of the Institute for Human Sciences (IWM), Vienna and the Albert Hirschman Center on Democracy at the Graduate Institute, Geneva. Hosted by Shalini Randeria, Rector of the IWM, Director of the Centre at the Graduate Institute, and Excellence Chair, University of Bremen (Research Group: Soft Authoritarianism), it features some of the most important voices in contemporary academia.

Together they reflect on democratic experiences and experiments the world over and explore whether this crisis of democracy represents a historically unique challenge or whether parallels to political crises in the past can be discerned. Why have democratic institutions lost their legitimacy along with their capacity to mitigate inequalities by righting the wrongs of economic, racial and gender injustice? How can the disenfranchisement and disillusionment especially of impoverished and marginalized sections of the population be transformed into enthusiasm for democratic participation? And in the midst of crises, can we also see tendencies that point to a renewal and reform of democracy?

Democracy in Question will feature 10 episodes, one every two weeks, starting from 8th October. While each episode addresses issues concerning the contemporary challenges to democracy in different contexts, the series is also committed to exploring themes in the longue durée of democracy that have occupied social scientists for decades.

Join Shalini Randeria and leading scholars for an exploration of the dilemmas facing democracies worldwide. Subscribe now, wherever you get your podcasts!

This podcast series is co-produced by the Graduate Institute’s Albert Hirschman Centre on Democracy and the Institute for Human Sciences (IWM) Vienna, in cooperation with Research Group: Soft Authoritarianism, University of Bremen and in collaboration with Richard Miron and Anouk Millet (Earshot strategies).