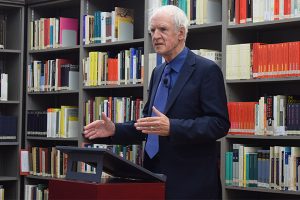 Philosopher Charles Taylor is one of the laureates of the 9th edition of the “Ratzinger Prize.”

The IWM warmly congratulates
Charles Taylor for the Ratzinger Prize 2019.

Canadian philosopher Charles Taylor, specialist in relations between religion and modernity, is one of the laureates of the 9th edition of the “Ratzinger Prize,” which will be conferred by Pope Francis at the Vatican on November 9, 2019. Second prize winner is the theologian Paul Bere from Burkina Faso.

The Joseph Ratzinger Prize is an award of the Vatican Foundation Fondazione Vaticana Joseph Ratzinger – Benedetto XVI and has been awarded annually since 2011 for special scientific-theological achievements in the context of contemporary discourse.