From Delhi to Vienna: Globalizing the IWM 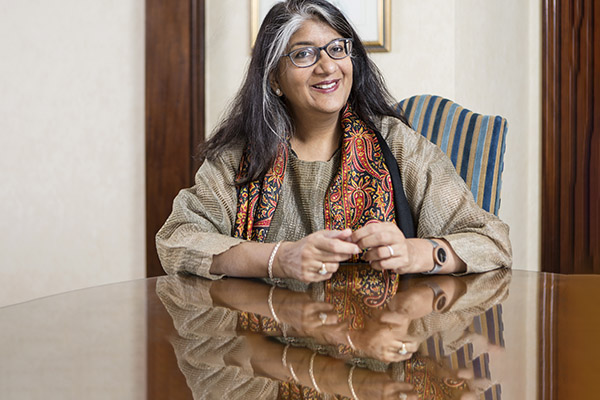 Born in Washington D.C., Shalini Randeria studied psychology, sociology and social anthropology at the Universities of Delhi, Oxford and Heidelberg. Her research and teaching took her to Berlin, Zurich, Geneva, Paris and Budapest before she came to Vienna as the Rector of the Institute of Human Sciences (IWM) in 2015. Her research interests range from the concerns of the poorest of the poor – the so-called ‘untouchable’ castes in India – to today’s most powerful global institutions, such as the World Bank and the World Trade Organization (WTO).

The IWM was founded in 1982 to serve as a meeting point and bridge between Eastern and Western Europe, and was led for more than 30 years by the Polish philosopher Krzysztof Michalski. What has changed since you took over as Rector in 2015?

When the IWM was founded in the midst of the Cold War, the confrontation between the two ideological blocks and the resultant divide cutting through the middle of Europe was THE defining theme. The ambitious plan to establish a centre of dialogue in Vienna at this fraught time was a courageous one. It proved to be an invaluable contribution to bringing both parts of Europe closer together. Even after the fall of the Iron Curtain, the Institute was much more than a close observer and commentator on the transformation processes in post-communist Central and Eastern Europe. IWM was very much part of history as it was being written. It also actively helped to shape the transition to democracy through scholarly enquiry and by furthering political debate.

A quarter of a century later, the IWM continues to address the urgent issues of our time – but Europe is no longer at the centre of world affairs today. The after-effects of the divide between East and West can still be felt, but its global importance has diminished due to rapid transnationalization and, in particular, the rise of Asia. This change is also reflected in the regional and thematic repositioning of the IWM. Extra-European comparisons and the experiences of the global South open up new, exciting perspectives – also on Europe’s past and present, which is a product of these imperial entaglements. Today’s major fault lines of political and social conflict do not run along national borders across Europe, but rather through each of our societies. Whereas the integration of new member states used to be the main concern within the EU, now the Union struggles to maintain internal solidarity and cooperation both by making its external borders impermeable, and by trying to counteract some of its member states’ centrifugal tendencies. The rise of various so-called “illiberal democracies“, in Hungary, Turkey, but also India, is, therefore, one of the important new foci of the IWM’s research.

You yourself grew up in a rather unconventional Indian household. Your great-grandmother, one of the first Indian women to gain a university degree, organized inter-caste weddings at her home. Your grandfather was a member of the body that drafted the Indian constitution and your grandmother defied all taboos to establish the first school for ‘untouchable’ girls in Calcutta. What influence did this have on your own career and research?

Mine was indeed a very unusual family in many respects: modern, cosmopolitan, but not western in our way of life. Only vegetarian food was cooked at home and alcohol was taboo, as was speaking English at home. So I spoke three Indian languages before starting to learn English at school at the age of 9, which is quite late for a middle class Indian child. When asked about my religion often today, I say that my family were not only secular, but for the most part also fundamentalist atheists.

What I can, in retrospect, value as having enriched and shaped my biography did not always make my life easy as a child. At the age of nine, I was asked at school to which caste I belonged. Since I was the only child in class unable to answer the question, I asked my mother. Her furious reply: “Who wants to know? Tell them that the caste system was abolished by the constitution.” In a country that was – and remains – deeply shaped by religion, her answer was unusual, to say the least, as was her reference to the constitution. The feeling of never quite belonging, of being slightly set apart and always viewing things in my own society from an oblique angle, however, proved to be an advantage later as a sociologist and social anthropologist. And my own scholarly focus on law and justice might well stem from an early awareness that privilege entails social responsibility.

As an anthropologist, you are accustomed to the role of a  „participant observer“, of analyzing your social environment with a critical eye. What surprised you – despite your Western education – when you first encountered European societies firsthand? What took some getting used to?

My family socialization sensitized me to gender issues at an early age. Equal treatment of men and women, girls and boys was simply something that was taken for granted at home. My maternal great-grandmother was one of the first Indian women to gain a university degree in 1901. When I came to Germany in 1982 to write my doctoral dissertation at the University of Heidelberg, I was surprised that only 3% of all full professors were women. In India, the share in the social sciences was close to 50%. For middle-class women in India, having both a family and a career was not only the norm completely but also probably much easier to combine than in Germany.

I was greatly surprised by the social status and visibility of religion in Europe, which I was taught to see as a model of secularism. In Germany, to my astonishment, official forms such as the tax returns or police registration required an indication of my religious affiliation. As a student at the University of Oxford, I was amazed to learn that some female British students had decided against applying to my college, St Anne’s. Being a non-denominational college it did not have a chapel, which meant that one couldn’t get married in the college chapel as Oxford undergraduates often did. This proximity of church and university was completely foreign to me. Neither theology nor religious studies are taught at Indian universities.

Religion is of enormous social importance in India, but the secularism enshrined in the constitution guarantees the equal treatment of various religions and protects the rights of religious minorities. It is this fundamental principle, which is now being called into question by the ruling Hindu-nationalist party in a bid to impose a ‘dominant culture’ (‘Leitkultur’) modelled on European nation-states, which give pre-eminence to the presumed homogeneous culture of the religious majority.

Whereas your earlier work focused on classic anthropological questions concerning the Indian caste system, your main research interests now lie with questions of law and justice in the international context. Is this because decision-making in more and more areas is being transferred to law courts? What are the consequences of this ‘juridification’ for democratic politics?

My research was always located at the interface between politics, law and society with the aim of reaching a wide public. My doctoral dissertation addressed normative plurality of family law, i.e. the autonomous jurisdiction of caste councils among the lowest castes that exists parallel to state law and courts. In the early 1990s I became interested in the legal, political and economic consequences of globalization of law and the role of private actors of governance. This was in the context of mass protests by Indian farmers against the new WTO framework permitting seed patents that curtailed farmers’ rights to collective knowledge and breeding of seeds by turning these into the intellectual property of multinational corporations.

My research on so-called development induced displacement shows that juridification frequently complements the loss of rights of the poorest sections of society. A plethora of new laws, administrative rules and emergency measures are used to force poor families to relocate to make way for infrastructure or mining projects, the establishment of National Parks, or Special Economic Zones. The influence of supranational organisations and corporations has curtails the sovereignty of nation states. Policy decisions in many areas are no longer taken by national parliaments, but by international financial institutions and corporations, who can use arbitration against national governments. These developments are extremely problematic for democratic politics as it leads to disenfranchisement of citizens, who feel increasingly powerless to affect policies through electoral choices. But new semi-juridical transnational arena also provide disadvantaged groups with new opportunities to bring their concerns to international attention. Citizens can thus assert their rights before new international legal bodies – even against a ‘cunning state’, which pretends that international institutions, agreements and credit conditionalities leave little room for manouevre in autonomous national decision-making.

The so-called “refugee crisis” has led once again to calls for a strong state. What is your assessment of the current resurgence of nationalist tendencies in many European states?

Demographic changes – real and imagined – fuel fears about the effects of increasing numbers of migrants in Western democracies. Not only immigration, but also the emigration of educated young people presents a challenge for many societies, for instance, in Central Europe. The economic and demographic necessity of migration increasingly collides all over Europe and the US with ethno-nationalist, populist mobilization. Populist politicians and media thus contribute to majoritarian anxieties of being “outnumbered” in one’s own country, which further incites resentment against minorities and migrants. Besides, there is recurrent anxiety about the so-called “overpopulation” in the global South – a perception of the world as being both under-populated (the Self seen as being too few) as well as over-populated (the Other, whether Africans, Muslims, the poor, the migrants, who are seen as too many). Hans Magnus Enzensberger describes this schizophrenic perception as “demographic bulimia”. Both these scenarios lead to states to intervene to curtail women’s reproductive autonomy. In Europe, political slogans and legislation are aimed at increasing the birth rate, whilst measures are taken to reduce women’s fertility in the global South, which affect above all poor women. We will address these issues of the demographic imagination in its effects on democracies at the IWM Summer School over the coming years.

What other issues will be the focus of the IWM’s work in the coming years?

An important challenge of our times is the growing gap and economic inequality between as well as within societies. We know a lot about poverty but very little about wealth. A new research focus at the IWM will explore changing justifications of wealth. Inequalities of income, and attitudes to these, have been much better studied than reproduction of differences in wealth. We plan to address in a historical and comparative perspective ideas of social responsibility stemming from old and new forms of wealth, the aesthetics of public display of wealth, and the moral or religious legitimations of a duty to share or redistribute wealth. Drawing on political philosophy, law and sociology, but also history, comparative religion and social anthropology, we would like focus on the arguments made in the past and present to justify the concentration of property and intergenerational transmission of wealth. Differences in inheritance tax and gift tax, for example, play as much of a role here as do the influence of religious traditions. While inherited, unearned wealth needs no justification in India, for instances, there has been a radical change in political discourse on accumulation of wealth in many post-socialist societies, albeit with fascinating differences between Russia and China. Understanding of these changes could help put the question of redistribution – free from populist resentment – back on the political agenda.

A German version of this interview was first published in the IWMpost 120 on the occasion of IWM’s 35th anniversary.