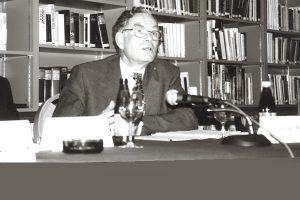 His deep commitment to IWM and the afterlife of his dictum A very few are privileged to have their name associated with a sentence that shapes the political sensibilities of a republic/nation. Ernst-Wolfgang Böckenförde will always be remembered for his famous dictum: “The liberal, secularized state draws its life from preconditions it cannot itself guarantee.” … 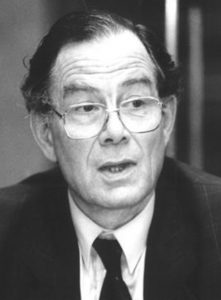 His deep commitment to IWM and the afterlife of his dictum

A very few are privileged to have their name associated with a sentence that shapes the political sensibilities of a republic/nation. Ernst-Wolfgang Böckenförde will always be remembered for his famous dictum: “The liberal, secularized state draws its life from preconditions it cannot itself guarantee.” This statement remains a contested political theorem in Germany as in other Western democracies.

„Der freiheitliche, säkularisierte Staat lebt von Voraussetzungen, die er selbst nicht garantieren kann“ was the original sentence published in 1964 in an article entitled Die Entstehung des Staates als Vorgang der Säkularisation, or “The Emergence of the State as a Process of Secularization”. One can imagine that for Böckenförde himself it may have been a matter of pride but also of some annoyance to be identified a lifelong with that one idea.

His dictum contains a double message. For one it points to the fact that the liberal, secular state is constantly in need of moral prerequisites in order the stabilize its authority/legitimacy. For another that it has to draw on these preconditions from elsewhere, i.e. to borrow them from religion. Being a practicing Catholic himself, Böckenförde, however, also wanted to encourage his fellow believers to accept the unsettling implications of modern democracy. Written in the West Germany of the 1960’s, it was a call to all citizens of the new state – and especially those inclined to religion – to venture the risk of liberal democracy. The sentence that follows the one quoted above formulates this exhortation explicitly: “This is the great adventure the state has undertaken for freedom’s sake.“ For it was Böckenförde’s conviction that we as citizens should unhesitatingly dare to embark on, and participate in, the adventure that is liberal democracy for the sake of freedom. Today these ideas are more relevant than ever at a time when the moral prerequisites of the liberal state are being questioned from within and challenged from outside, and when liberal democracies having lost some of their attraction seem like precarious adventures that could indeed fail.

From 1983-1996 Ernst-Wolfgang Böckenförde served as a judge on Germany’s Constitutional Court. He was certainly among the country’s finest legal scholars. 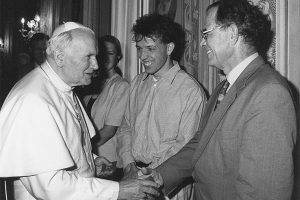 Throughout these years he maintained a close relationship to the IWM. For many years he was the deputy chair of its Academic Advisory Board besides being a regular guest at IWM’s Castelgandolfo talks hosted by the Pope. Out of these eight illustrious meetings, he missed only the very last one in 1998. To the very first one in 1983 he gave a talk on the image of the human in legislation; for the one in 1991 he reflected on the social and political ideas of order in the French revolution – to mention but two of his outstanding contributions that were published in the series of Castelgandolfo talks.

In the mid 80’s Böckenförde led one of IWM’s very first research projects with a title characteristic for his thought: Human Rights in Christian-Theological and in Secular Understanding. The project was headed by him together with German philosopher Robert Spaemann, who was slightly older than Böckenförde and died only a few weeks earlier on December 10, 2018. The IWM has thus lost two longtime friends within a short span of a few months.

Ernst-Wolfgang Böckenförde passed away on February 24, 2019 at the age of 88. We at the IWM will miss his good counsel advice and generous support. And we will remember him not only for his dictum but as a friend who extended us a helping hand when it was most needed.