Ihor Bartkiv: "The war must be documented—and someone has to do it" 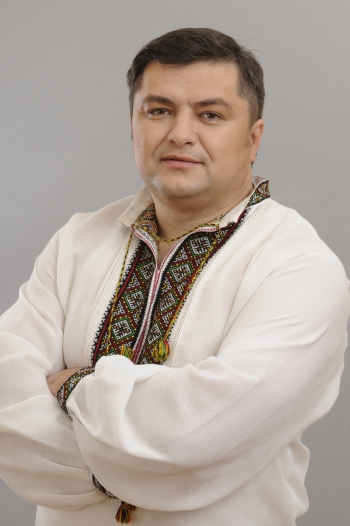 People who experienced the Russian occupation of Bucha and other towns in the Kyiv region in February-March 2022 are now trying to save themselves mentally rather than physically, seeking refuge from their memories. The rapid reconstruction of the city, which so captivated outside observers, is also a way to try to return to “pre-February 24” Bucha. The archivists and regional experts who lived through all these horrible events are forced to bring together their personal experiences and their professional duties.

There are only four employees in our archive department: three women and myself. Now all of us are working to gather and catalog information: we look at photos, videos, and journalistic materials; we ourselves conduct interviews and record the testimonies of eyewitnesses. It is not easy for my colleagues, who also lived through the experience of occupation, to bear all of this: they often cry or retreat into themselves. In the end, right after liberation there were quite a few people who were eager to talk about both imprisonment and the shootings, but now I see that many are no longer to say anything on these topics, as if they are trying to distance themselves from what they went through. People are striving to forget about it.

The city is being rebuilt. In the spring and summer, there were almost no traces of the crimes that took place here. If you didn’t know the story, you might even think nothing had happened here. Perhaps the only giveaway would be the many new graves that appeared at the cemetery. It is still difficult to believe that all these atrocities could happen in the 21st century. As an ordinary citizen, I can’t say what we did to deserve so much destruction, murder, and torture in the course of a month. This is why it is so important for us to record all these feelings, these events, so that in the future every ordinary citizen, historian, journalist, or researcher has access to this information, and we can…have our say. Maybe that will make things a bit easier.

All of this pain has been with us for a long time already. Some colleagues and I have been volunteering since 2014, taking humanitarian aid to both Sloviansk and Debaltseve – that is, we had seen the war with our own eyes. And yet we still didn’t want to believe it. So, despite all the emotions, as the head of the archive department I got to work preserving documents. Because wars come to an end, but people have to live on – replacing lost documents, receiving their pensions…Life is life.

Our archive has information dating back to 1943, but there is almost nothing about what exactly happened here during the Second World War. This is why it is so important to gather all possible information about this war. Honestly, I personally regret that I never recorded my grandmother’s story. She talked about how she survived the Holodomor, and how she was taken to Germany to work during the war, and how she was later in filtration camps…I was little and did not understand how important it all is.

Now we are trying to gather different testimonies, as every person experienced the occupation in his or her own way. Some people spent the entire time in bomb shelters or in their own basements, so they did not see anyone and had no contact with the Russians. Some people managed to evacuate—and for many this experience was also traumatic. For example, my neighbor’s car was shot up, his dog was killed. When he drives past that spot now, he says, it sends a shiver down his spine.

During the occupation there was no mobile connection, no electricity, no water, and no gas, so food was cooked outside, people shared provisions with each other, someone went to look for water, someone else for firewood. Everyone tried to help each other. They also fed the dogs, cats, and other animals. A stable near us was bombed, many horses were burned alive, and those who managed to survive wandered the city in search of food, so people were looking for something to give them as well. When it came to bartering, food for animals was more expensive than a jar of pate or a loaf of bread. And people traded their food for food for their animals, because you can’t explain to animals, just like you can’t explain to small children, what is happening.

One acquaintance of mine from Yablonska Street, where the most shootings took place, invited me to his place after liberation and took me to his shed. “Look closely,” he said. “You can see two pigs standing there. When the orcs came, I thought they would take them immediately, but the pigs didn’t make a sound, they hid in the darkness. Even the animals were scared: the pigs didn’t grunt, the chickens didn’t crow…” And if this is what the animals experienced, what can you even say about the people…

But, as I mentioned earlier, people are now refusing to talk. For example, Andrii Kuprash, the starosta of the village of Babyntsia, was taken into the woods twice to be shot, he dug his own grave…But thanks to how active their community is, there were 20-50 people who came to his defense, gathering near the village hall. The Russians saw that everyone was sticking together so closely, and they let the starosta live. But he won’t talk about it: “You’ve got to understand,” he says. “I want to forget it. The shooting is very difficult.”

In Lisova Bucha, where the Kadyrovites were quartered, there is a family with many children. When their food supplies had almost run out, the father took aside the oldest daughter and explained everything to her very directly. He told his child that they were going to go to the city hall to look for food, and that he might be killed and she might be raped, but their task was to get their hands on something edible, because the youngest children couldn’t survive the hunger any longer. And indeed they were stopped, searched, stripped, but they made it to their destination, got food, and returned home. Honestly, I cannot imagine what it was like for the father to have to tell his 11-year-old daughter this…

I actually wanted to go to the front to fight—there everything is more or less understandable, black is black and white is white. But when I saw all of this here…The war must be documented—and someone has to do it.

The main problem when it comes to photos and videos from the time of the occupation is that there are not so many of them. Because most people deleted everything from their phones in order to survive. Of course, after liberation both journalists and volunteers captured many evocative images, but they were not directly documenting the events that took place in Bucha during the Russian occupation. So now we are also hunting for these materials, surveying people and gathering all possible data.

I was such an idiot—and I’m not ashamed of it. I used my own phone to take photos of what I saw on Vokzalna Street, where our troops completely destroyed the occupiers’ convoy on 27 February. I told my wife I was going to look for food, but in fact I was taking pictures. If she had known the truth she would never have let me go. I filmed how a person came out with a phone to take photos of a convoy with equipment—and was immediately killed. I didn’t even have my passport with me, just paperwork showing I’m head of the archive department. And my archive colleagues and I were targeted by the occupiers. The mayor of Bucha later said that the Russians got ahold of lists of those who had taken part in the ATO [the 2014-2022 war in the Donbas] and went from apartment to apartment to find them and, of course, kill them. If they had found my paperwork, I would immediately have been sent “to the basement.” I don’t know how I would have withstood all this abuse; I doubt I would have survived. That is why I say God was watching over me, because I don’t know how else to explain it.

For many people who lived through the occupation in Bucha, their worldview has changed, they’ve reevaluated their priorities and values. You won’t notice this externally, but internally…People have started wanting to live. They stopped putting everything off for a rainy day, like before; it has changed relationships between parents and children, husbands and wives, because after everything we feel acutely that we are only given one life—and we must live it with dignity.

At the same time, there is a desire to look at everything with a bit of humor, because if you take all this on yourself, you will go mad. One acquaintance of mine told the story of being taken prisoner—with a smile! He was later asked if he was doing all right psychologically, because how could he talk about all these horrifying events like that! And he simply said that this helps him, because otherwise it would be very difficult to stand it. Shelling is one thing, a person can get used to it, like we got used to sleeping in our clothes under three blankets. But getting used to these deaths? ... Time must pass. But I am certain that we will soon be celebrating our Victory.