How are migrants involved in making and re-making cities? How have they become part of the wealth generation in cities and of the social fabric and politics of cities over a period of time? How do migrants contribute to and challenge the sites and scales of participation and citizenship, of social justice claims and narratives, and of the politics of cities?

Concentrating on the contested location of migrants in the making and remaking of cities, this research focus addresses the dynamics and narratives of urban social and political inclusion and exclusion in cities. It explores the political alliances among city residents beyond historically and culturally established divides in imagining and fighting for urban futures. The aim is to examine the challenges that migrants pose to urban governance and to the struggle for social and historical justice in city-making processes. There is a particular focus on the displacements, dispossessions and contentious politics involved in the making and remaking of cities that were formerly industrial hubs and which are acquiring increasing prominence in debates on urban redevelopment and politics. These rustbelt cities have also become central to discussions about the increasing levels of populism in today’s political climate. There will be studies of migrants in the cities of global powerhouses. However, the centerpiece of this research focus concerns those cities that migrants have helped to establish as industrial hubs but that have since been neglected and now often struggle with economic hardship and demographic anxieties. We study discursive and institutional continuities and discontinuities in histories and ethnographies of city-making as well as migrant emplacement in these cities. This involves comparative research on deindustrialized cities where “culture” and cultural industries have taken center stage in efforts to reinvent these places and their populations.

IWM, in collaboration with Mahanirban Calcutta Research Group (CRG) in Calcutta, launches a research platform on Forced Migration with a particular focus on South Asia and its European-Asian Dimension. This collaboration advances cooperation between European and South Asian institutions and academics, while working toward setting up a joint research platform for innovative knowledge production on forced migration and border regimes. The series of activities and workshops, which will be held in Vienna and Calcutta (see open call for application), aim to enhance research capacity, facilitate exchange of knowledge, and policy expertise in forced migration studies in and between Europe and South Asia. Bringing together scholars, policy makers and practitioners from different disciplines and regions, the platform aspires to decentering Europe-focused scholarship, debates, and policies on forced migration. It benefits from ongoing projects on Europe’s Futures, and networks evolving from workshops such as “The Global Compacts on Refugees and Migrants and the Architecture of Global Politics of Migration” organized in and by IWM as well as the research platform Urban Futures  at the University of Vienna  and Cities and Human Mobility Collaborative at the Zollberg Institute on Migration and Mobility at the New School for Social Research.

The Europe-Asia research platform on Forced Migration aims to analyze forced migration and refugees as social, economic, and political actors in their precarity, in relation to the politics of austerity and the rise of populism in various countries. It investigates changing regimes and forms of governance of migrants/refugees; the solidarity networks and demands for social justice entangled with increasing inequalities, austerity politics, and racism; the institutional components regulating and managing different forms of displacement; incorporation and exclusion of refugees and migrants from labor markets and protection regimes along the lines of gender, race, religion, and work. While adopting a comparative perspective, the research agenda places an emphasis on historical specificities of various cases and debates. The Europe-Asia research platform strives to contextualize the forced migration dynamics in Europe in the light of forced migration and regimes of protection in Asia/South Asia and vice versa with the aim of attaining a greater understanding of the specificities of the various current policies and debates on refugees and migrants. 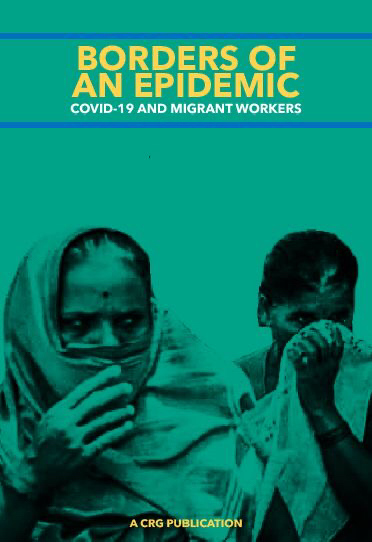 BORDERS OF AN EPIDEMIC: COVID 19 AND MIGRANT WORKERS

Migrant workers from different parts of India trekked back hundreds of kilometres to reach home in the wake of the sudden announcement by the government of a complete lockdown of the country amid the spectre of Corona virus. This online publication by Calcutta Research Group highlights the ethical and political implications of the epidemic – particularly for India’s migrant workers. [Read more…]

BURDENS OF AN EPIDEMIC: A POLICY PERSPECTIVE ON COVID-19 AND MIGRANT WORKERS

While Borders of an Epidemic was documentary in purpose and nature, Burdens of an Epidemic analyses the issue of migrant labour from several dimensions of the epidemic. The purpose of this tract is to present a policy perspective of the contemporary situation. [Read more]

Both publications are part of the educational material for the Calcutta Research Group (CRG) programme in Migration and Forced Migration Studies. The programme is held in collaboration with the Rosa Luxemburg Stiftung, Institute for Human Sciences, Vienna, and several other universities and institutions in India.

Workshop in Global Protection of Migrants and Refugees, Kolkata
November 23-28, 2020