The Other Europe. Interviews Behind the Iron Curtain 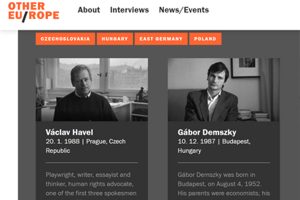 The Other Europe is the name of a six-part series, shot in 1987–1988 in the countries of Central and Eastern Europe, especially Czechoslovakia, Hungary, East Germany, Poland and Romania.

The documentary, including interviews with Bronislaw Geremek, Václav Havel, Lech Wałęsa, György Konrád and many others, was produced for the British Channel Four by the former company Panoptic. The author and guide through the series is the political scientist and publicist Jacques Rupnik, a close friend and supporter of the IWM since its beginnings. Therefore it is no surprise that the premiere of this extraordinary film took place at the IWM in October 1988.