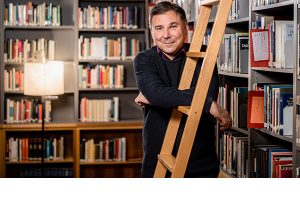 The publisher Klett-Cotta and the Allianz Kulturstiftung award the Jean Améry Prize for European Essay Writing 2020 to the outstanding intellectual and publicist Ivan Krastev.

The IWM warmly congratulates Ivan Krastev on the award to him of the Jean Améry Prize!

The publisher Klett-Cotta and the Allianz Kulturstiftung award the Jean Améry Prize for European Essay Writing 2020 to the outstanding intellectual and publicist Ivan Krastev.

The jury, chaired by Robert Menasse, gives the following reasons for its decision to award the 15,000 Euro prize to Ivan Krastev:

“The clarity of thought against the commitment of time – this is one of the things Ivan Krastev and Jean Améry have in common. In his approach to our present, Krastev undermines discursive surfaces, in the spirit of Jean Améry’s concept of enlightenment, in order to focus attention on what is repressed and beyond repair, but all the more reason to be cautious about. In his work, he meticulously examines the question of what democracy and liberalism mean beyond mere phrasing, and makes it clear that they can only be sustained if it is understood anew, time and again, that freedom is always and exclusively freedom for the one who thinks differently. […]“

The award ceremony will take place on 4 May 2020 at 6:30 pm at the Maxim Gorki Theater in Berlin. After the ceremony the laureate Ivan Krastev will discuss with the philosopher Susan Neiman as part of the series of events „Berliner Korrespondenzen“.

About the Jean Améry Prize:
Since 2015, the Allianz Kulturstiftung has been working with the publisher Klett-Cotta to promote the Jean Améry Prize across Europe which is awarded every other year. A jury composed of prominent international authors, literary scholars and critics reflects the prize‘s pan-European spirit. The prize is awarded in memory of Jean Améry for outstanding achievement in the field of critically-aware literary essay writing. It is intended to strengthen public interest in current topics and various forms of essay writing, and to promote social discourse.
Améry’s widow initiated the prize with the publisher Klett-Cotta in 1982, it had been awarded to four authors by 1991. The writer Robert Menasse revived the Jean Améry Prize in 2000.