40 Years Back: Solidarity, A Word That Created History 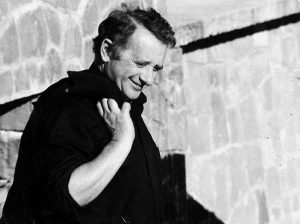 People are remembered for certain outstanding moments in their lives. One such moment in the life of Józef Tischner occurred on October 19, 1980, when he delivered a sermon on Cracow’s highly symbolic Wawel Hill for the newly founded Solidarność, the first independent trade union in a Warsaw pact state. Only a few weeks, following earlier large and determined protests at the Gdansk shipyard, Solidarność had been officially recognized by the Polish state. It was a moment of change and hope, that moment of sudden openness, and indeterminateness, that is something precious and often all-too transitory.

In the Polish case, it only lasted about a year: martial law was declared in December 1981. It was the severest of attempts to throttle the Solidarity movement. In the end, the attempt did not succeed.

Back to October 1980. Tischner has to preach to all the representatives and the new leadership of Solidarność. His audience is brimming with hope and expectation, yet he can be sure that the state organs, brimming with anger and suspicion, will listen at least as carefully. It has to be a sermon, it cannot be and should not be eminently “political”, but it also cannot be apolitical either. Tischner begins with a sentence that involves everybody who is present: “Today, we are bringing to Wawel Hill the problems that are closest to our hearts, problems that are summarized in a single word – solidarity.” The opening  sets a reflective and personal tone, regarding solidarity as a “problem” and something that matters to everybody’s “heart”. Throughout the sermon he will also continue to play on the double meaning of “solidarity”, i.e. while all his analyses speak about the universal human capacity of solidarizing and carrying each other’s burden, it is impossible not to hear the intimate political implications they have for the situation in Poland. Almost cunningly, at one point he asks: “This old but also very new word solidarity, what does it mean?”

The public sermon on October 19, 1980, and many other interactions with the Solidarity movement that were to follow, earned Tischner the unofficial title of “Chaplain of Solidarity”. Until 1989 he was the movement’s spiritual counselor and tutor, and unlike other priests who played a similar role, Tischner’s reputation not only remained intact, but grew still more after 1989. In some sense, it might also be more fitting to call him the “Philosopher of Solidarity.” While Leszek Kołakowski’s writings were highly influential in fueling Solidarity’s anti-Communist, anti-totalitarian ethos, it was Tischner’s continuous efforts that closely linked Solidarity with Catholicism and broader strands of Polish society. His articles written during his early engagement with the movement were published in Polish in 1982 under the title Etyka Solidarności (Engl. The Spirit of Solidarity, 1984). They display the finest combination of clear articulation and philosophical profundity, advocating individual responsibility and an ethics of dialogue, which clearly inspired the political development of that time.

Once again back to the October 1980 sermon. After beginning with the sentence about  Solidarity as a “problem” and as something close to our “hearts”, Tischner continues with these two most remarkable sentences: “The word solidarity concentrates in itself our uncertain hopes, full of trepidation; it stimulates us to heroism and reflection; and it binds together people who only yesterday were far apart. History creates words in order that, in turn, they may create history.” Noteworthy is his insistence to speak about “solidarity” as a word rather than a movement or a political reality. Yet it is precisely this abstract solidarity as  a concept or a “problem” which is said to have the astonishing capacity “to bind together people who only yesterday were far apart.” Whom are we to think of? It is hard to miss the message of reconciliation for a society in turmoil. However, the truly daring statement comes in the short last sentence: History, it holds, creates “words” (not protests, reactions, upheavals), and these words in turn “may create” history. The articulation might sound cautious, yet its meaning is explosive. Tischner bluntly states that this “new word” is capable of creating a new history – and this statement is made without a single time mentioning or referencing the movement of Solidarity. Interestingly, the sentence also has a double message. One could understand it both as a call for perseverance for the new spirit of solidarity, but also as a prophecy for Solidarity’s historical role to come.

The best-known quote from his sermon will come only at a later point, when Tischner speaks about the “solidarity of consciences” as the deepest articulation of solidarity.

Józef Tischner died in June 2000. In Poland he is remembered as a highly original thinker, unafraid of conflict, who turned to each person with kindness and handled even the most serious issues with a twinkle in his eye.

Forty years ago today, Tischner’s sermon spoke about the word creating history; in fact it was his own words that day that shaped a new political reality.

Ludger Hagedorn is a Permanent Fellow at the IWM and Head of the Institute’s  Patočka Archive and Program.

In 1982, Tischner became a founding member of the newly established Institute for Human Sciences (IWM) in Vienna. For many years he served as the President of its Board of Trustees. It was at IWM as well that Tischner wrote decisive parts of his last book The Controversy over Human Existence.